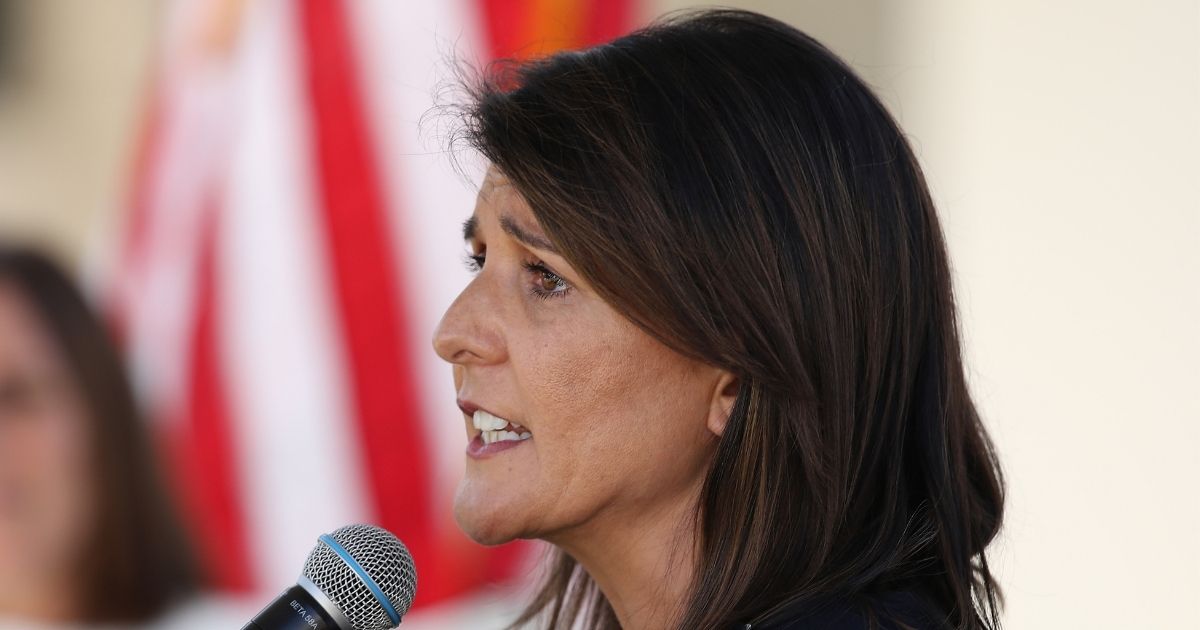 Former United Nations Ambassador Nikki Haley does not suffer fools when it comes to foreign policy, and her recent criticism of President Joe Biden highlights one of the prior administration’s accomplishments that he cannot simply undo.

Biden “just reversed everything,” Haley said this week in an interview on the “Glenn Beck Podcast.”

“But the part that he can’t erase, and it’s really a point of pride, I think, is the Abraham Accords, because this was an amazing thing. Many presidents before Trump had said that the only way to get peace in the Middle East was through the Palestinians,” she added to host Glenn Beck.

“The president went to his first foreign policy speech, [it] was to the Arab Summit, and he said, ‘I want us to unite against terrorism,’ meaning, translation, I want us to unite against Iran. He got the attention of the Arab countries. Then he started to acknowledge truths: Jerusalem is the capital of Israel. We’re going to have Israel’s back. This is what Israel can do for you.”

The Abraham Accords is an agreement involving the United States, Israel, Bahrain, Morocco, Sudan and the United Arab Emirates that normalized relations between Israel and those four Arab states.

The Arab world has generally been hostile toward Israel, making the accords a rare step toward peace.

Haley explained her experience working with ambassadors from Saudi Arabia and the UAE, and suggested that some world leaders are publicly hostile towards the country of Israel because of their constituents’ feelings toward the Jewish state.

“I had a meeting, I and the British ambassador had a meeting with the Saudi and the Emirati ambassador. They were complaining, you know, ‘Why doesn’t anybody call out the Houthis for the terrorist organization that they are? Why are they always hitting us?’ And I stopped them and I said, ‘You know, I could make the same case for Hamas and Israel.'”

Do you think Nikki Haley should run for president in 2024?

“We went on with the meeting, they pulled me aside afterwards, and they said, ‘We know you’re right,'” she told Beck.

Haley’s message is incredibly timely, considering the fact that there are mounting tensions between Israel and Palestine, with Hamas constantly firing rockets at Israel, and the Israeli military responding with missiles of their own.

Under President Trump, we were moving in the right direction with the Abraham Accords. Now – almost 2000 rockets sourced from Iran have been launched into Israel from Gaza.
@POTUS Biden’s appeasement strategy with Iran is not working. pic.twitter.com/4kNVMPJozK

“The President expressed his support for a ceasefire and discussed U.S. engagement with Egypt and other partners towards that end. The two leaders agreed that they and their teams would remain in close touch,” a Monday news release from the White House explained, referring to a phone call between Biden and Israeli Prime Minister Benjamin Netanyahu.

While the United States can only do much when it comes to the Middle East, the American president has historically played a unique role in facilitating affairs between other nations and the Jewish state.

Biden is facing a series of domestic crises, but his administration must quickly step forward to craft solutions and make sure not to undo the progress that the last White House made.

It is not the job of the United States to be the world’s police, so it is important for people like Haley to explain the hugely significant role that diplomatic relations play in assuring that American soldiers’ blood is not needlessly shed.