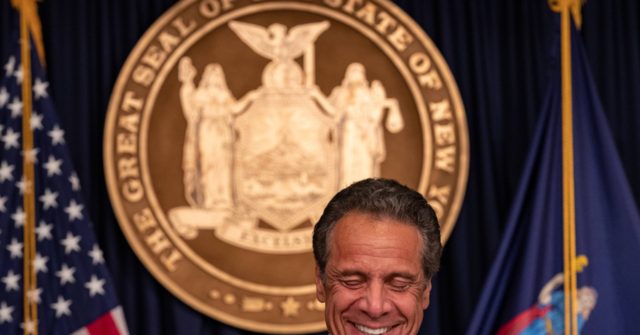 New York Governor Andrew Cuomo has won an Emmy “in recognition of his leadership during the Covid-19 pandemic and his masterful use of television to inform and calm people around the world,” the International Academy Of Television Arts & Sciences announced Friday.

Gov Andrew M Cuomo of NY will receive the International Emmy Founders Award in recognition of his leadership during the Covid19 pandemic & his masterful use of TV to inform & calm people around the world. The Emmy will be presented to @NYGovCuomo on Nov 23 https://t.co/dwKIImwYNV pic.twitter.com/1mKkmg6FKW

Cuomo, whose state was hardest hit by the coronavirus, and who issued a directive forcing nursing homes to accept infected patients, has been lauded by Hollywood as a counterpoint to President Donald Trump during the pandemic.

A press release from the Academy stated:

Governor Andrew M. Cuomo of New York will receive this year’s International Emmy® Founders Award, in recognition of his leadership during the Covid-19 pandemic and his masterful use of television to inform and calm people around the world. The Emmy® will be presented to Governor Cuomo during the Academy’s live,  International Emmy® Awards show streaming at 11 AM ET, on the Academy’s website www.iemmys.tv, on November 23.

“The Governor’s 111 daily briefings worked so well because he effectively created television shows, with characters, plot lines, and stories of success and failure,” said International Academy President & CEO, Bruce L. Paisner.  “People around the world tuned in to find out what was going on, and New York tough became a symbol of the determination to fight back.”

The Founder’s Award is presented to an individual or organization who “crosses cultural boundaries to touch our common humanity”. Prior recipients include Vice President Al Gore, Oprah Winfrey, and Steven Spielberg.

On March 2, 2020, New York Governor Cuomo conducted a media briefing from Albany, the State’s capital, to inform and educate New Yorkers and the public at large about the coronavirus outbreak that was just starting to be recognized as a massive public health threat. That 12-minute introduction, part of a 34-minute session with other state leaders, was the first of 111 consecutive daily briefings for New Yorkers and the wider world about the grim progress of the worst pandemic to hit the United States in a century. The briefings were carried live by New York’s local TV stations, nationally on CNN, MSNBC, Fox News and other news outlets in the U.S. and around the world.  The last “daily” briefing was held on June 19, 2020. These daily communications have drawn a total of 59 million viewers.

Andrew M. Cuomo is the 56th Governor of New York. After the 1996 election, President Clinton appointed him to serve as HUD Secretary. In 2006, he was elected New York State Attorney General. In 2010 he was elected Governor and re-elected twice in 2014 and 2018. Governor Cuomo is also a New York Times best-selling author.

Cuomo also published a book last month touting his leadership during the pandemic. It was protested by grieving families.