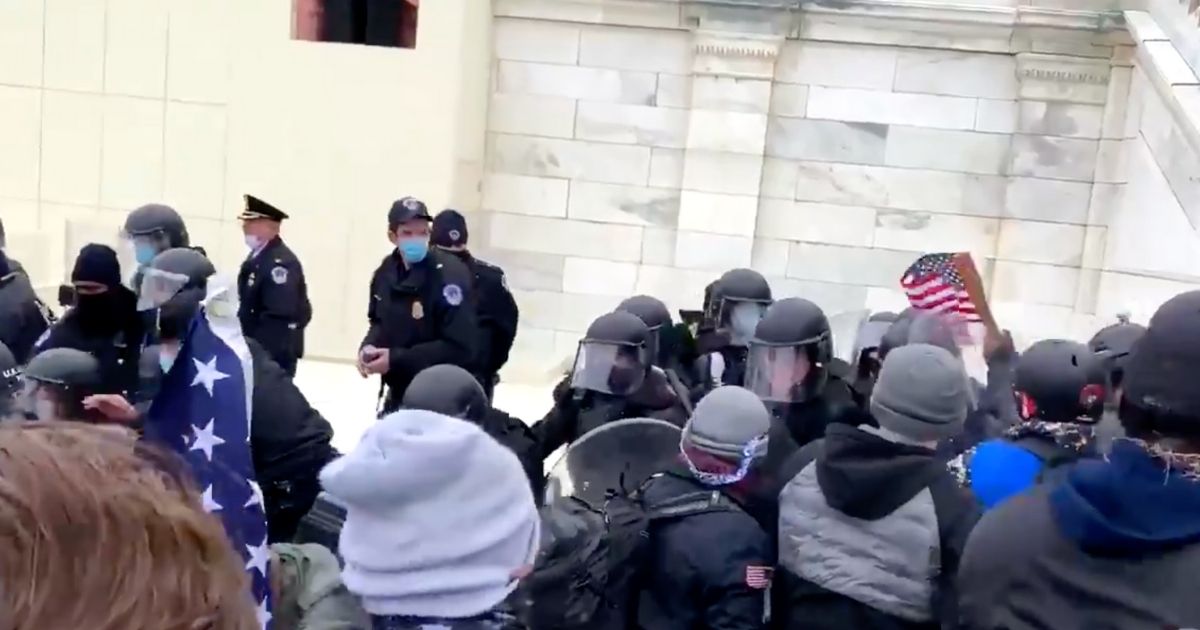 Americans’ pent-up anger over the presidential election erupted in full fury Wednesday as protesters took to the streets of Washington, D.C., in protests that surged and seethed through the centers of power.

At one point, protesters entered the Capitol building complex, where inside legislators were fencing over the results of the Electoral College vote that hands the presidency to Democrat Joe Biden, with a core band of Republicans objecting to certifying the results of the vote in a parliamentary last stand.

Videos of the scene showed a powerful, angry tide sweeping aside police trying to contain protesters.

WARNING: The following videos contain vulgar language that some viewers will find offensive.

BREAKING: revolution in process as Trump supporters break into the Capitol building, attacking police, breaking windows, and knocking down doors

The people have pushed through & are storming to main chambers pic.twitter.com/NW6VDDNBQw

TRENDING: Will Don Lemon Be Canceled for What Was Just Spotted Behind Him During CNN Segment?

BREAKING: Trump supporters have breached the Capitol building, tearing down 4 layers of security fencing and are attempting to occupy the building — fighting federal police who are overrun

This is the craziest thing I’ve ever seen in my life. Thousands, police can’t stop them pic.twitter.com/VVdTUwV5YN

BREAKING: Trump supporters have breached all security barriers and are now actively destroying and occupying the Capitol building

I repeat. The Feds have lost control of the Capitol building

The Washington Post reported that after protesters smashed through an outer ring of metal security fences, they were met on the steps of the Capitol building by police who initially stopped the tide of demonstrators there.

At about 2 p.m., police released a chemical irrritant against the protesters.

This is going to get bad.
Patriots and Capitol Police continue to face off.
Look at all the blood on the ground…. #WashingtonDC #DCProtests pic.twitter.com/28hodMm1aK

I don’t recognize our country today and the members of Congress who have supported this anarchy do not deserve to represent their fellow Americans. (2/2)

Colleen Cupp of Carmel, Indiana, said the protest was not about violence, according to USA Today.

“We’re here supporting our president,” she said. “It feels unifying.”

“I just felt compelled to be here because it seems like our republic is slipping away from us,” Jason Bjorklund of Sioux Falls, South Dakota, told NBC News.

He said there were “mountains of evidence of fraud” but that “corruption from the top to the bottom” prevented the results of the election from being thrown out.

The Post reported that many protesters left the area where President Donald Trump was speaking to march on Congress.

“There’s the house of traitors!” one marcher reportedly shouted.

Trump’s campaign has insisted that there has been voter fraud in states that include Arizona, Nevada, Georgia, Michigan and Wisconsin, as well as Pennsylvania.

However, despite numerous claims of voting irregularities, including affidavits alleging fraud sworn to by reported eyewitnesses, no court has yet ruled that widespread fraud materially affected the results of the presidential election.