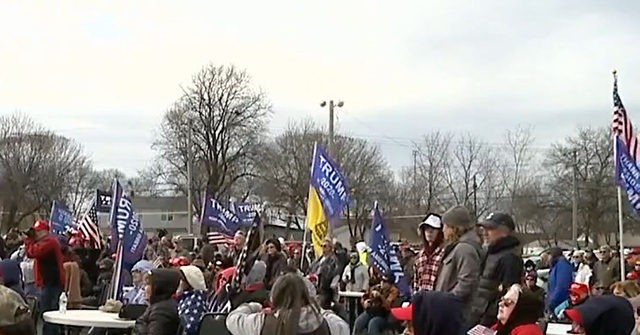 The Milwaukee Health Department shut down a pro-Trump rally Saturday at Serb Hall after the roughly 1,000 attendees did not comply with its social distancing rules.

“A violation of the city’s public health guidelines amid the COVID-19 pandemic [Chinese coronavirus], the health department showed up. When officials asked the group to sit down, they stood up and chanted ‘USA,’” Fox 35 reported.

After the health department showed up and asked everyone to sit down this happened: pic.twitter.com/OiJnVC4xUK

“The City of Milwaukee is here. I’m not going to lose our license. I will stop the rally if you don’t sit down. Sit down,” he said:

WATCH: The moment a #defendyourvote rally in Milwaukee abruptly ends after a representative for the venue ends up on the ground: @fox6now pic.twitter.com/KRHE2OBFvk

Moments later, a man appeared to try and take the microphone from Alioto but when he stepped back, the manager fell to the ground. Several attendees then gathered around to help him to his feet.

“The health department worked with Mr. Alioto the day before the event to explain what the rules were and what the potential consequences were for violating those rules,” the department said in a statement:

When the health inspectors arrived after the rally begun [sic], they saw people not wearing masks, people not social distancing and the crowds exceeding the maximum allowed number of people at an event like this. Health department policy is if inspectors spot a violation, the health department no longer gives warnings so Serb Hall should expect a citation.

However, Alioto told WISN the incident “highlights to us that this was inappropriate for the city to put us in a position where we have to enforce their laws, this is not what we’re trained to do.”

Once the sound equipment was taken up and the tables and chairs put away, the group moved the rally to the intersection of 51st and Oklahoma, according to the Fox 35 report.

“The health department did come to my office with my board president here after the rally, told us we were going to receive three citations, for $500 each,” Alioto said.