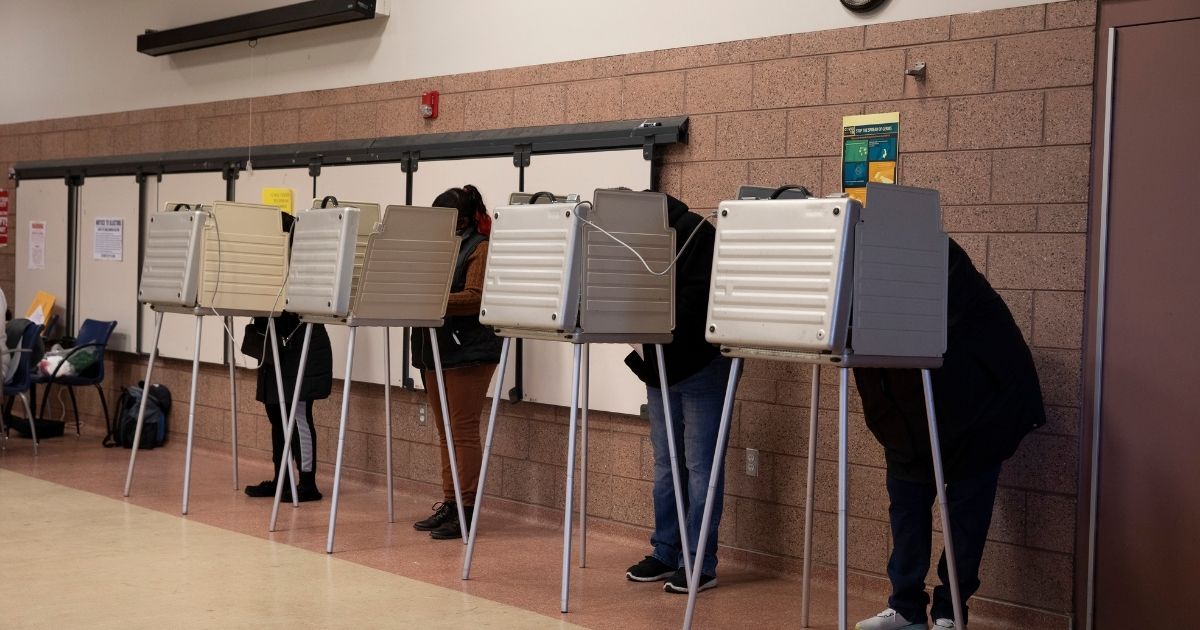 In the ongoing comedy of errors that is the 2020 presidential election, a recount confirmed that President Donald Trump won Michigan’s Antrim County, even though the election night results appeared to show that Joe Biden had taken the county.

This was the third time that the county’s “results” were modified.

On election night, it looked like Biden had won the county, with the former vice president apparently up by roughly 3,000 votes the following morning.

Eventually, Trump was the winner by nearly 3,800 votes — a larger margin of victory than previously claimed. The audit conducted Thursday showed Trump with one more vote than the previous results, and Biden with 11 fewer votes.

County officials claimed the original miscount that wrongly showed Biden had won was the result of “human error” — a common refrain amid an alarming pattern of bizarre, dubious “errors” that seem to all favor Biden.

Antrim uses Dominion Voting Systems machines and software, which have come under fire amid allegations of “glitches” that conservatives say seem to always work against Republicans.

A Dec. 13 forensic audit by an independent group concluded that Dominion machines were “intentionally and purposefully designed with inherent errors to create systemic fraud and influence election results.”

Do you think Dominion voting machines can be trusted?

Specifically, the report by Allied Security Operations Group said “the system intentionally generates an enormously high number of ballot errors,” often forcing the ballots to be “adjudicated,” or manually scrutinized by an election worker.

“A staggering number of votes required adjudication,” the report said. “This was a 2020 issue not seen in previous election cycles still stored on the server. This is caused by intentional errors in the system.”

In his audit report, Ramsland said the sky-high error rate was intentionally triggered in order to facilitate fraud.

“The intentional errors lead to bulk adjudication of ballots with no oversight, no transparency, and no audit trail,” he said. “This leads to voter or election fraud. Based on our study, we conclude that The Dominion Voting System should not be used in Michigan.”

Trump’s legal team has accused election workers of exploiting the adjudication process to artificially inflate Biden’s vote tally with fraudulent ballots — outside the view of GOP poll workers — in order to rig the outcome.

The scene at Detroit’s absentee ballot counting center is growing more heated. The windows now being covered up. Allegations of violations. Sec. of State says she welcomes challenges. pic.twitter.com/oUL4A0h3Ku

Jonathan Brater is Michigan’s director of elections. He works for the state’s Democratic Secretary of State, Jocelyn Benson, a vocal proponent of mass mail-in voting.

Brater denied the conclusions reached in the Allied Security report, insisting that any glitches or errors that favored Biden were “routine” and “easily explained.”

Brater said in a court filing Sunday: “Although a more detailed analysis of the report must be conducted with an individual with technical expertise, it is apparent to me that the report makes a series of unsupported conclusions, ascribes motives of fraud and obfuscation to processes that are easily explained as routine election procedures or error corrections, and suggests without explanation that elements of election software not used in Michigan are somehow responsible for tabulation or reporting errors that are either nonexistent or easily explained.”

Trump is plowing ahead with his legal challenges, while the mainstream media rabidly dismisses mounting fraud claims in the desperate hope that Americans will move on.

“The [Nevada] election was inevitably riddled with fraud.”

•Over 42,000 people voted more than once.
•At least 1,500 dead people are recorded as voting
•More than 19,000 people voted even though they didn’t live in Nevada pic.twitter.com/40CuwPt0ES

Given what’s at stake, it’s of the utmost importance that these claims of election fraud are fully investigated and that we take the claims of Democrats and their establishment media allies, which effectively amount to “nothing to see here, move along,” with a grain of salt.

Trump Can’t Be the Republican Nominee in 2024 — He Cost GOP Senate, White House