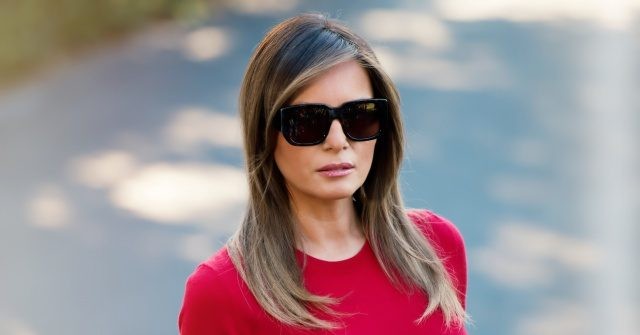 After four years, First Lady Melania Trump is revealing the historic restoration and preservation initiatives she launched while living in the White House.

Mrs. Trump — who previously designed a jewelry collection inspired by the ethos of New York City, New York Palm Beach, Florida, and Paris, France — detailed the work she has undertaken as First Lady in terms of restoring the White House’s most treasured design aspects and gems of history.

In particular, Mrs. Trump completed the first full renovation of the Queen’s Bathroom in the residence since the 1950s, updated and restored the President’s Elevator, restored the floors of the East Room as well as the marble floors of the State Entrance and Hallway, and fully renovated the White House’s bowling alley.

Mrs. Trump also took on the daunting task of restoring and conserving the eye-catching wallpaper in the Family Dining Room, designed by the French firm Jean Zuber and Co. Likewise, in keeping with the traditional classical architectural themes of the White House, Mrs. Trump renovated the Rose Garden and fully renovated the Tennis Pavillion.

In one of her most historic achievements, Mrs. Trump added a sculpture to the Rose Garden that was crafted by Japanese-American artist Isamu Noguchi — marking the first piece of art by an Asian American in the White House collection.

Mrs. Trump wrote of the preservation efforts in a letter:

Over the last four years, my family has had the immense honor of being able to call the “People’s House” our home. We were welcomed and supported in this personal journey by a team whose dedication to the house in which they serve transcends administrations and serves as the living legacy of a building that remains the symbolic epicenter of our national life.

As First Lady, and as the temporary custodian of this national treasure, I was inspired by the example of my predecessors. Their reverence for the White House, and their love of history ensured the long-term preservation of the building in which they both served and lived. In similar fashion, the projects that I have overseen during the last four years are ones which I believe will not only preserve the house’s heritage but enhance the experience of its beauty and solemnity for generations to come.

Through a team of dedicated advisors whose passion rose above mere cosmetic alterations, my attention was brought to areas of the house which were in great need of structural restoration and preservation. In 2018, we completed the first full renovation of the Queen’s Bathroom since the 1950s. Our goal of updating and restoring “The President’s Elevator,” which is used by the First Family, visiting dignitaries, and White House staff, was accomplished in the same year. In 2019 we embarked on a several months-long restoration of the East Room floor, which brought to life the true magnificence of this historic space. This was done in tandem with work performed on the marble floors of the State Entrance and Hallway. These are the first areas to greet all visitors to the White House, and the impact of the painstaking work of re-grouting, restoring and then re-polishing them has been profound.

The Bowling Alley also underwent a full renovation in 2019, and I hope it will be a space that is enjoyed by all who use it. The restoration and conservation of the priceless Zuber wallpaper in the Family Dining Room, perhaps the most ambitious project of the Administration, remains to be completed, and will be, I hope, admired by all who see its beauty. The advice and input of the White House curatorial team was critical to the success of such endeavors, and it was with great pride that I was able to work with them directly to renovate their offices and ensure they had the necessary archival and curatorial infrastructure to enable the continuation of their invaluable work on the collection.

Throughout, our goal has been to balance the needs of the present with the continuity of overall architectural tradition of the White House. This aim could not have been realized without the group of American craftsman whose knowledge and enthusiasm ensured the work was completed through the application of traditional methods that keep with the long history of the building itself.

Over the course of 2020, our country has suffered the devastating and unexpected loss of life due to the Covid-19 pandemic. The economic impact of the pandemic, which has been felt by so many in this country, has profoundly shaped our shared experience of American life. As a result, it was with a great sensitivity to the wider national backdrop that I unveiled two long-planned projects on the White House grounds. In November 2020, we publicly marked the installation of “Floor Frame” by Isamu Noguchi in the newly restored Rose Garden. The Rose Garden celebrates the history of many previous First Ladies, and it was my privilege to introduce into its design the first work completed by an Asian-American artist to enter the White House collection. The simplicity and beauty of Nogochi’s sculpture provides an enduring message of strength, which felt particularly relevant at the moment of its unveiling.

Shortly thereafter, in December 2020, I had the great privilege to announce the completion of the refurbishment of the Children’s Garden and the construction of the new White House Tennis Pavilion. This project planning began in 2018 and was approved by the Commission of Fine Arts and the National Capital Planning Commission in June 2019. The Tennis Pavilion was constructed in partnership with the Trust for the National Mall and the National Park Service, and funded entirely through private donation. The team of American designers, builders, and artisans, who relied on locally sourced materials, created for the Nation a monumental addition to this historic home that I know will be part of its enduring legacy. Their achievement was made all the more notable as it was accomplished despite the many challenges they faced because of the Covid-19 pandemic.

As this chapter comes to a close, it is important to acknowledge the many people and departments without whom my role as First Lady would not have been possible. Both the White House Office of the Curator and the White House Historical Association have worked tirelessly to ensure these projects met their standards of preservation, conservation, and scholarly excellence. I am grateful for those who in a private capacity have so generously donated to my initiatives and to the collection as a whole.

Reports have recently circulated that Mrs. Trump is considering writing a coffee table book to showcase her historic restoration and preservations of the White House during her time as First Lady.