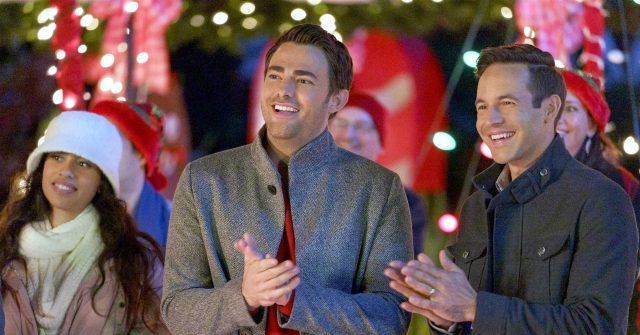 Actor Jonathan Bennett told fans Friday that he is thrilled to be part of “progress” as he becomes the Hallmark Channel’s first gay leading man in the network’s upcoming Christmas movie The Christmas House.

After promising to be more LGBTQ friendly, the Hallmark Channel is set to debut its first gay-lead in a holiday movie, The Christmas House, starring Bennett and Robert Buckley as brothers who return home to honor the family’s Christmas traditions.

“I’m proud of everyone at Hallmark Channel for making the holiday table bigger and more welcoming and warmer this year,” Bennett told NBC News. “It’s an honor to be part of the network’s progress.”

Last year, the Hallmark Channel bowed to demands from LGBTQ activists who accused the network of being too heterosexual, especially in its holiday programming. The activists claimed that Hallmark was homophobic for neglecting gays in their made-for-TV movies.

The network agreed, and last December made promises to change things.

“We are continuing to expand our diversity,” said Crown Media Family Networks executive vice president of programming Michelle Vicary. “We are looking at pitches for LGBTQ movies — and we are looking to expand and represent the United States as a whole.”

“I think that we are making great strides,” Bennett said. “And we are, [but] like the industry, there is a lot of work to be done to catch up in that area.”

That promise has been fulfilled, almost exactly a year later, as Bennet takes center stage in The Christmas House, which begins airing on Nov. 22. “What I love about the characters in the movie is that we aren’t caricatures or stereotypes,” Bennett said. “We are two loving, stable, kind men who are in love and want to start a family of our own.”