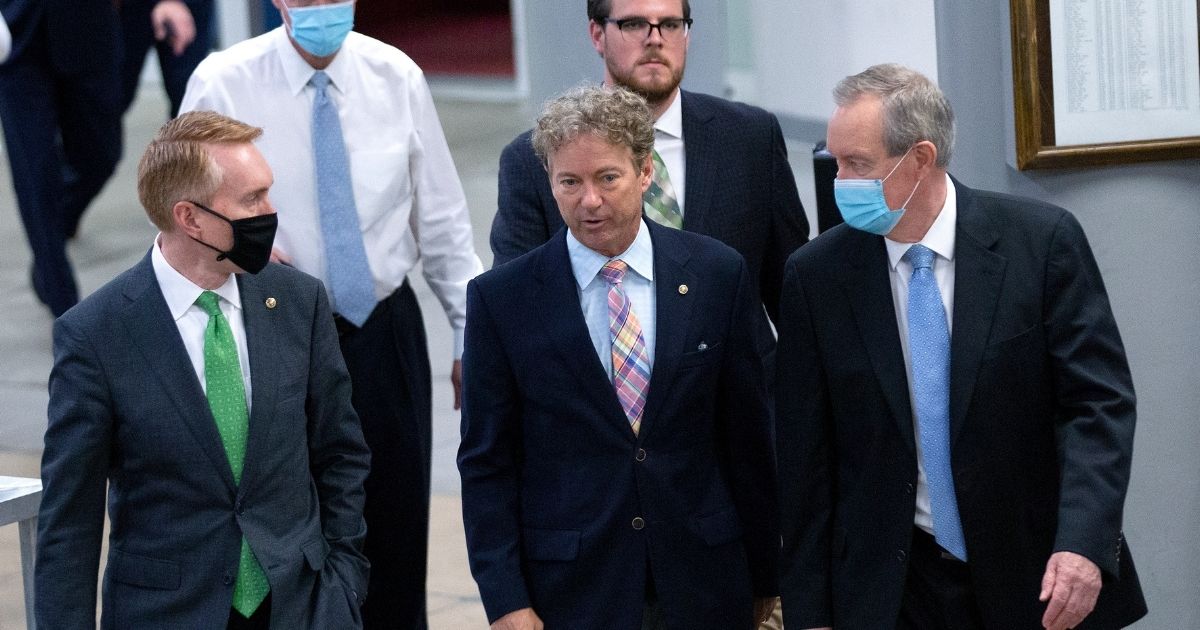 (Stefani Reynolds / Getty ImagesU.S. Sen. Rand Paul of Kentucky, center, is pictured with Sen. James Lankford of Oklahoma, left, and Sen. Mike Crapo of Idaho, right, walking through the Senate Subway in an August file photo. In an interview Saturday, Paul, a physician, told Breitbart News that cloth masks have “no value” in battling the the coronavirus. (Stefani Reynolds / Getty Images)

Mandates that claim to be fighting the coronavirus are exercises in making individuals submit to the power of government, according to Republican Sen. Rand Paul of Kentucky.

Paul, who has long urged Americans to “push back” against coronavirus mandates, was interviewed Saturday by Breitbart.

Paul, a physician himself, noted that his core objection is that Americans are being expected to — without question — voluntarily abandon their liberty and their freedom of shaping an individual destiny on the altar of unproven, if not faulty, science.

Masks, he said, are “all about submission.”

Paul told Breitbart an objective analysis will shows that as mandates piled higher, so did coronavirus cases.

“Every one of the mandates — and you look in country after country, state after state — you look at when the mask mandates went in — the incidents went up exponentially after the mandates. Restaurants, nobody can eat in a restaurant, there’s no science behind any of that,” he said.

He noted that passenger airplane restrictions are so minimal as to be foolish.

“Middle seat missing on the airplane, you really think you’re like 12 inches from the other guy instead of six inches, it really makes a difference? None of it really makes any sense, and there’s no epidemiological evidence. You know, it’s like, ‘Wash your hands, stand six feet apart,”’ he told Breitbart.

If masks slowed the spread of the virus, Paul told the website, data would prove it. Instead, he said, the evidence does not.

‘The trajectory of the virus hasn’t been altered at all by any of these things,” Paul told Breitbart.

Paul noted that cloth face coverings are not effective barriers to the virus.

“And the masks are different, too. The N95 mask actually does work to a certain extent, if worn properly and used [with] sterile technique,” he told Breitbart.

Do you oppose mask mandates?

Paul told Breitbart that the loss being experienced by Americans is significant, citing the audience at Turning Point USA’s Student Action Summit in West Palm Beach, Florida, where he was among the speakers.

Migrant Caravan in Guatemala Pushes Through Border from Honduras — Heading to U.S.A.