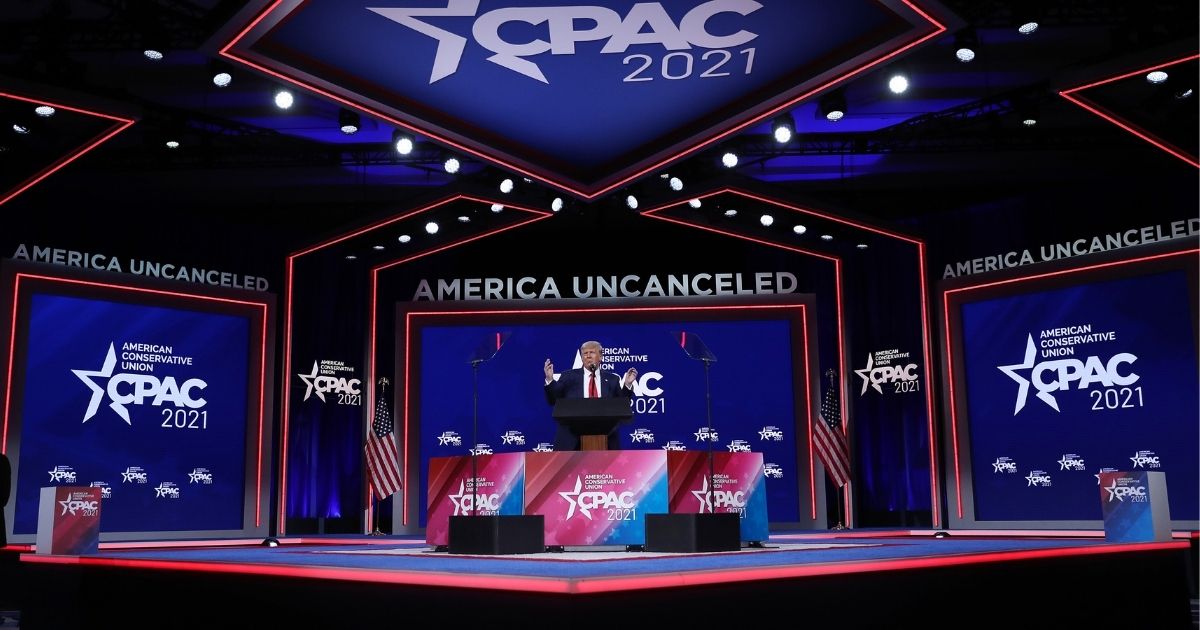 During the Conservative Political Action Conference last weekend in Orlando, Florida, many prominent Republicans spoke about the most pressing issues facing our country.

Meanwhile, some leftists were busy trying to compare the shape of the CPAC stage to a Nazi rune.

“Has anyone else noticed the shape of the CPAC stage is the Odal Rune/SS insignia?” one woke Twitter user asked.

Has anyone else noticed the shape of the CPAC stage is the Odal Rune/SS insignia? pic.twitter.com/TCns4B1tq8

Thousands of users liked the tweet, and many made similar comments of their own.

I call bullsh-t on @Hyatt hotels. The chance to take your stand was while this stage was in use. Hyatt chose to let it go and in doing so has permanently lost my business. https://t.co/p2prXFAcl0

The controversy even prompted Hyatt Hotels Corp, the owning corporation of the hotel that hosted CPAC, to make a statement in opposition to symbols of hate.

“We take the concern raised about the prospect of symbols of hate being included in the stage design at CPAC 2021 very seriously as all such symbols are abhorrent and unequivocally counter to our values as a company,” the corporation said, according to Yahoo! News.

The fact that Hyatt would take this outlandish theory “very seriously” shows the pure hypocrisy of the political left. For months, Democrats have attempted to paint all conservatives as radicals based upon the views of a select few extremists who promote theories like the QAnon conspiracy.

A vast majority of Republicans have spoken against these extremists, but the left ignores that fact. At the same time, verified Twitter users and large corporations push a leftist theory that is just as baseless.

Indeed, the facts of the situation show just how unfounded this theory is. For one thing, the CPAC stage was created by Design Foundry, a decidedly liberal company.

RELATED: The Field: Who’s in Position to Lead the GOP Into 2024 and Beyond?

According to The Blaze, the contract between Design Foundry and the American Conservative Union — the organization that hosts CPAC — stated that “the designs, renderings, drawings, specifications, materials and other documents used or created as part of the proposal are owned by Design Foundry.”

“I know Design Foundry because they handle design for many events in DC for companies like MSNBC & Target,” he said in a Tuesday tweet.

“They oversaw the design for the Biden Cancer Summit in 2018. The owner, Annie, is very liberal and was so excited for Biden’s victory. Great work conspiracy theorists.”

1. I know Design Foundry because they handle design for many events in DC for companies like MSNBC & Target.

They oversaw the design for the Biden Cancer Summit in 2018.

The owner, Annie, is very liberal and was so excited for Biden’s victory.

In an ironic twist, the liberal company has now been forced to defend itself against attacks from the very party it seems to support. The company told Business Insider that it “had no idea that the design resembled any symbol, nor was there any intention to create something that did.”

“Design Foundry denounces all hate speech and acts of racism, prejudice, or bigotry in all forms,” the company said in a statement.

The Blaze also reported that CPAC will no longer be using the services of Design Foundry, providing yet another blow to the company.

“It’s clear that the company we retained designed a stage that has become an unwelcome distraction,” Ian Walters, the director of communications for the ACU and CPAC, said. “As a result, we will not be using that company’s services going forward at future events.”

Even before the stage controversy, the left was searching for reasons to attack CPAC. A Dec. 9 article from WESH-TV said Democrats were criticizing the conference as a “potential COVID-19 super-spreader event.”

On Feb. 26, Fox Business reported that Hyatt Hotels Corp stood by their decision to host CPAC despite the fierce backlash.

“We take pride in operating a highly inclusive environment and we believe that the facilitation of gatherings is a central element of what we do as a hospitality company,” a company spokesperson said.

“We believe in the right of individuals and organizations to peacefully express their views, independent of the degree to which the perspectives of those hosting meetings and events at our hotels align with ours.”

Whether it’s condemning a “super-spreader” event or a supposed Nazi promotion, nit-picking at these things is just a disguise liberals use to hide their real agenda.

Now that the facts have come out, has Twitter applied their standards against misinformation to take down tweets promoting this baseless theory about the stage? Of course not.

Hundreds of tweets comparing the stage to a Nazi rune remain in circulation on the website. Apparently, misinformation is only dangerous if it goes against the particular beliefs of the left.