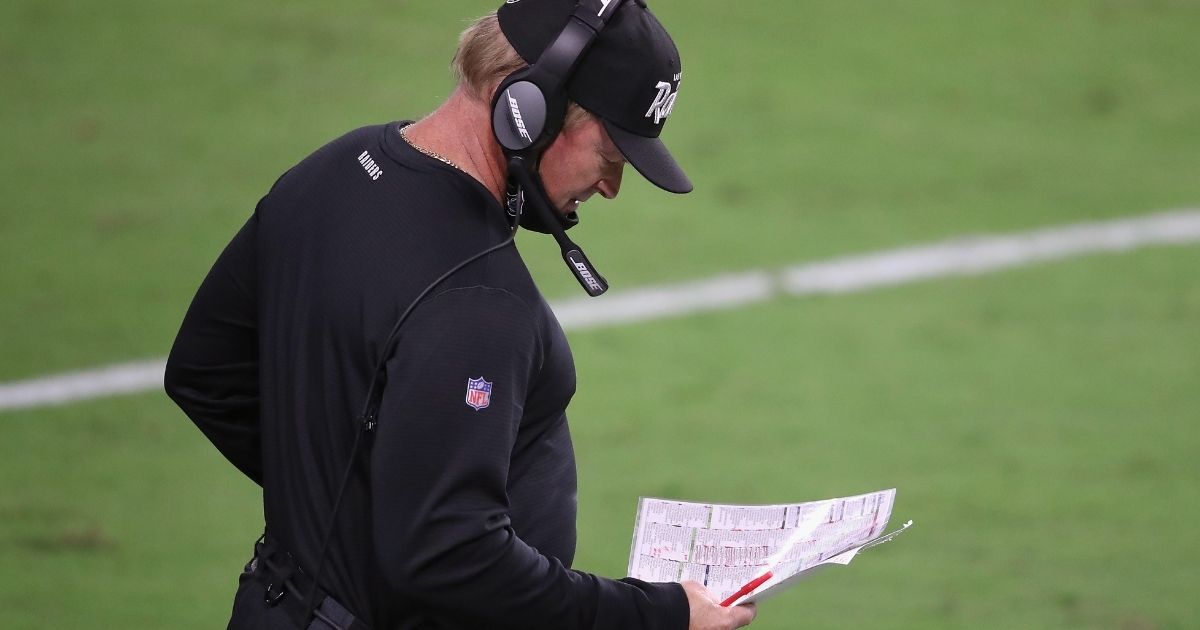 The National Football League is slapping major fines and the loss of a sixth-round draft choice on the Las Vegas Raiders for repeated violations of the league’s COVID-19 rules, according to multiple media reports.

The league is fining the Raiders $500,000 and its head coach, Jon Gruden, $150,000 for the latest violations, reports say. For the year, the team and its players have been docked more than $1 million.

That development led to fellow members of the offensive line being placed in self-quarantine. Brown also was found to have not worn the tracking device he is supposed to don for purposes of contact tracing.

Sources: #NFL will fine the Las Vegas #Raiders $500,000 & coach Jon Gruden $150,000 and strip the team of a 6th round draft pick for COVID-19 protocol violations related to OT Trent Brown’s positive test in late October. Escalated fines/pick were due to being a “repeat offender”.

The Raiders are the first team penalized with the loss of a draft pick for breaking the league’s COVID-19 protocols, NFL.com reported. Las Vegas originally had two sixth-round selections, one of which was acquired from Washington. The Raiders will lose whichever pick is higher.

In its coverage of the fines, ESPN said a source it did not identify told the news outlet the league acted due to the team’s “brazen and repeated violations of [COVID-19] protocols.”

The Raiders and Gruden were fined $250,000 and $100,000, respectively, for the coach going maskless Sept. 21 during the team’s home opener against New Orleans.

Are these penalties too harsh?

A $50,000 fine followed when the league said a non-credentialed employee was given access to the locker room after that game.

Ten Raiders also were fined for appearing at a charity event last month without masks and also mixing with the crowd.

Tight end Darren Waller led the way with a $30,000 fine, while nine other players, include quarterback Derek Carr, were fined $15,000 each.

Remember when Gruden said he took this seriously because he had personally dealt w Covid? 🤦🏽‍♂️ https://t.co/4QsNd7jtfx

I mean, the #NFL fined the #RAIDERS & Coach Gruden yesterday (including stripping them of a 6th round draft pick) for COVID violations that happened a month ago.

Yet, the league was cool with playing a game that had 2 teams with COVID concerns and now a positive on the field. https://t.co/a8IcPPTiSk

The Raiders are not the only team being fined for COVID violations.

The Pittsburgh Steelers face $350,000 in fines, according to Reuters. The team will have to fork over $250,000, and head coach Mike Tomlin must pay $100,000 because some of the team’s coaches were not wearing masks on the sideline Sunday against Baltimore.

The Tennessee Titans were fined $350,000 last month for COVID-19 “protocol violations,” according to Yahoo Sports.