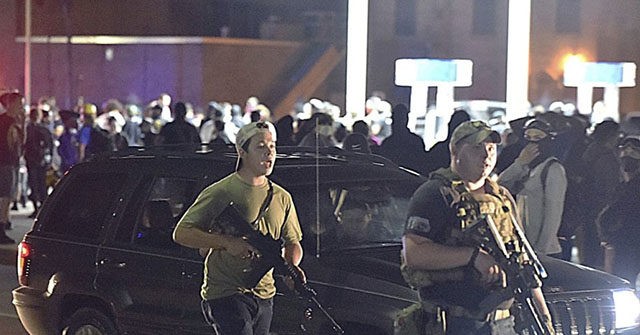 During a Thursday interview Kyle Rittenhouse says he used coronavirus stimulus money to buy the AR-15 he allegedly used in Kenosha, Wisconsin, on August 25, 2020.

Rittenhouse was charged with the murder of two people during the riots that followed the officer-involved shooting of Jacob Blake. He claimed the shootings were in self-defense.

The rioters got enraged by that. Kyle actually attempted to retreat. He was chased down by attackers that were repeatedly stating that he should be killed. They came at him lightning-fast and attempted to begin striking him and wrestling with this rifle with an intent to kill. He had no choice but to fire his weapon and protect himself.

Pierce also told Breitbart News Sunday the AR-15 Rittenhouse used was legally possessed, but would not say how it was acquired.

On November 10, 2020, Breitbart News reported that 19-year-old Dominick Black was charged for allegedly buying the AR-15 for Rittenhouse. ABC 7 cited an affidavit claiming Black allegedly took money from Rittenhouse, “then on May 1st he drove 300 miles north from Kenosha to a hardware store in upper Wisconsin to buy the [AR-15].”

Upon getting the rifle, Rittenhouse, a resident of Antioch, Illinois, allegedly stored the gun at his stepfather’s house in Kenosha. He then allegedly retrieved the firearm during the Jacob Blake riots and took it with him when he went.

The Daily Mail now reports that Rittenhouse allegedly used a coronavirus stimulus check to get the money used to buy the AR-15.

Rittenhouse was freed from jail on $2 million bond Friday. Kenosha County Sheriff’s Sgt. David Wright said, “Kyle Rittenhouse’s bond was posted this afternoon at about 2:00 pm which was set up through his attorney. He is no longer in custody at the Kenosha County Jail.”