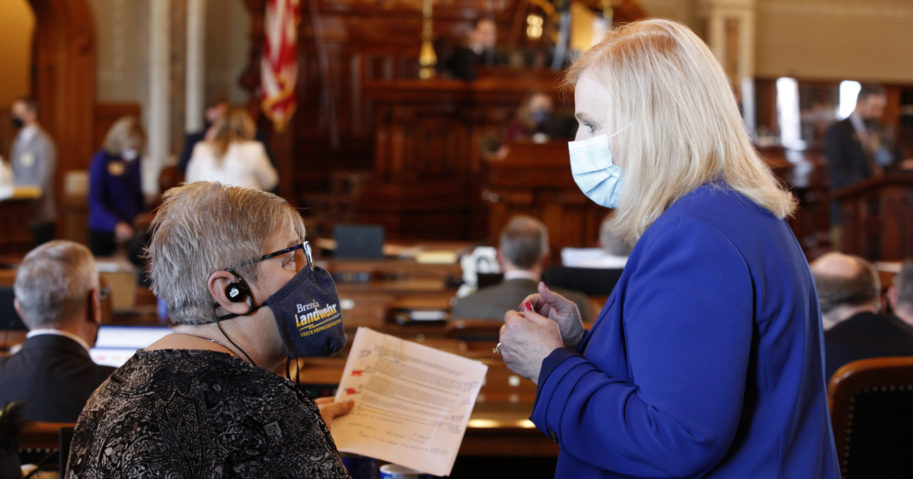 Republicans on Friday pushed a proposed anti-abortion amendment to the Kansas Constitution through the state House, a reminder of election setbacks for pro-abortion Democrats on the anniversary of the U.S. Supreme Court decision legalizing abortion nationwide.

The vote was 86-38 on a measure that would overturn a 2019 Kansas Supreme Court decision that declared access to abortion a “fundamental” right under the state’s Bill of Rights. Abortion opponents had two votes more than the two-thirds majority necessary for passage, sending the proposal to the Senate, where a debate could occur as early as next week.

“I think it’s about as ugly as you can get,” said Rep. Annie Kuether, a pro-choice Topeka Democrat.

Republicans said the timing of the debate was a coincidence, but pro-abortion Democrats, particularly women, saw it as a pointed message that GOP legislators and pro-life groups intend to keep moving toward a state ban.

TRENDING: Biden Gets Off to Slow Start, Lags Behind Obama and Trump with First Approval Rating

“It’s remarkable and it shows you that Kansas, that we are a pro-life state,” said Rep. Tori Arnberger, a Republican from the central Kansas town of Great Bend, who led the pro-life side during the debate.

Pro-life lawmakers said that if the Kansas court decision stands, two decades’ worth of restrictions on abortion enacted with bipartisan support could fall in state court challenges.

The 2019 ruling put on indefinite hold a law banning a common second-trimester procedure — designated as “dismemberment abortion.” Special health and safety standards for abortion providers, described by them as unnecessary and burdensome, have been on hold since 2011 because of a lawsuit.

Should this amendment be added to the Kansas Constitution?

Abortion opponents also worry that also in jeopardy are a 24-hour waiting period for an abortion, a requirement that most minors seeking abortions notify their parents, and rules for what providers must tell their patients.

“The people, over the last three decades, have supported very strongly reasonable regulations on the abortion industry, and they want those protected,” said Jeanne Gawdun, a lobbyist for Kansans for Life, the state’s most influential pro-life group.

But several Republicans said in explaining their yes votes that they would continue to push for a ban on abortion if the amendment is added to the constitution.

Freshman Republican Rep. Patrick Penn of Wichita said his late mother, a survivor of abusive relationships, had been urged by family to abort him “in accordance with every excuse promoted by the pro-death forces.”

If the Senate also approves the measure by a two-thirds majority, it would go on the ballot in the August 2022 primary, when approval by a simple majority of voters would add it to the state constitution.

“It will almost certainly lead to an abortion ban,” said freshman Democratic Rep. Lindsay Vaugh, a Kansas City-area pro-abortion supporter, noting moves for near bans in other states, including Alabama, Tennessee and West Virginia.

The timing of the statewide vote was a key issue last year, when pro-life groups pushed to have the measure on the ballot in the August 2020 primary.

Four Republicans voted then against that measure, joining many Democrats in arguing that the larger and broader group of voters in the November general election should decide. In Kansas since 2010, an average of 3.5 times as many Republicans as Democrats have cast ballots in primaries, and the primary electorate tends to be more partisan.

Three of those Republican dissenters retired, and another lost his GOP primary race. The GOP had a net gain of two seats in the November election, making its majority 86-38, with one independent House member.

In Friday’s vote, only Republicans backed this year’s proposal, and only Democrats and the independent House member voted no.

“It was, ‘This is the time to protect life,’” said Kristan Hawkins, Students for Life’s president. “We need to stand up and hold elected officials accountable, regardless of what party they’re in.”

But Kuether argued that Kansas legislators keep repeating the same decades-old “debates over controlling women” even after the U.S. elected its first female vice president, Kamala Harris. She said there’s no debate over any proposal “to deny a right to men.”

No tokes over the line? Biden admin waives pot-use prohibition for employment

Ted Cruz at CPAC pushes back: ‘Who is John Boehner?’