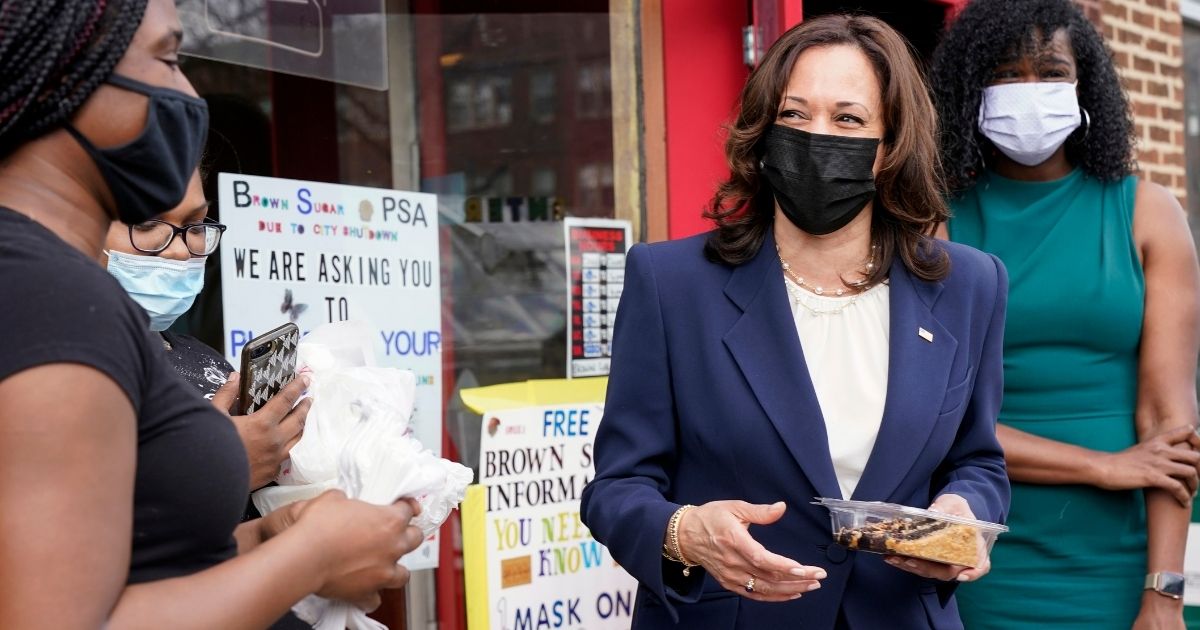 Vice President Kamala Harris is supposed to be fixing the humanitarian crisis at the southern border of the U.S. — but she’s too busy with her cake to lift a finger to help the situation.

President Joe Biden handed the issue off to her back on March 24, but Harris hasn’t visited the border or even held a news conference in the two weeks since.

She could have made a quick detour while she was in California to celebrate Easter in her home near Los Angeles or skipped her trip to Oakland to push the administration’s new infrastructure bill.

Instead, she turned up Tuesday at Brown Sugar Bakery on the South Side of Chicago to hobnob with business owners and local politicians, Fox News reported.

While migrant kids shrouded in foil blankets remain packed into plexiglass pens and border facilities fill up beyond capacity, Harris took the opportunity to nab a piece of German chocolate cake — her favorite — and talk about equity in vaccine distribution at her stop in the midwest.

Harris joined the state’s Lt. Gov. Juliana Stratton and Cook County State’s Attorney Kim Foxx at the bakery after it appeared on a list of small businesses she might like to visit, according to WLS-TV.

“She could have went a million other places, but she came here, and I’m grateful for that,” bakery worker Tyera Adugba told the network.

It’s true — Harris could have gone to the Delphi Emergency Intake Site in Donna, Texas, to visit the latest facility housing unaccompanied minors, or other facilities in the area that are currently crammed full of illegal immigrant children at “1700% pandemic capacity.”

Do you think Vice President Kamala Harris will do anything to stop the surge of illegal immigrants at the border?

She could have peaked in at Kay Bailey Hutchison Convention Center in Dallas where another 3,000 children are expected to be held.

Or she could have had a photo op at one of the border crossings where hundreds of illegal immigrant gang members and sex offenders were nabbed by U.S. Customs and Border Protection — the ones they were able to catch, at least.

Even a news conference laying out her plan for addressing the crisis would have been something.

But Harris instead walked away from that midwestern bakery with a slice of her favorite confection and trays piled with strawberry, caramel, and lemon cupcakes — unaware the optics convey a “let me eat cake” obliviousness to the plight of the people.

It’s not that Harris has to only focus on this one issue, but it would help if she were doing anything about it at all.

Arizona’s Republican Gov. Doug Ducey called Harris “the worst possible choice” to deal with the snowballing disaster at the border for good reason.

“In no point in her career has she given any indication that she considers the border a problem or a serious threat,” Ducey said.

She may have said the right things recently when pressed into acknowledging the problem she said won’t “be solved overnight,” but she certainly isn’t acting like someone ready to roll up her sleeves and take on the issue.

The truth is that she doesn’t care what’s happening at the border because it’s part and parcel of Democratic policy and their view of illegal immigration.

Democrats welcome hordes of illegal immigrants who they view as future voters while caring little about the migrants’ present situation because it fits their purpose.

Harris hasn’t done anything to secure the border because the immigrants aren’t real people to politicians like her, but rather a means to an end.

Illegal immigrants are welcomed into the country — already at a disadvantage and impoverished — and the Democratic Party is at the ready to promise them the world.

Rather than owning up to their role in allowing people into the country illegally with no practical way to vet them and without a clear path to citizenship in the first place, Democrats tell illegal immigrants it is all white supremacy that is keeping them down.

Like all Democrats, Harris won’t act because she understands that a permanent underclass of poor immigrants is exactly the demographic group the left can target with their handouts and goodies — and the fact that they can also weaponize their race against Republicans is the icing on the cake.