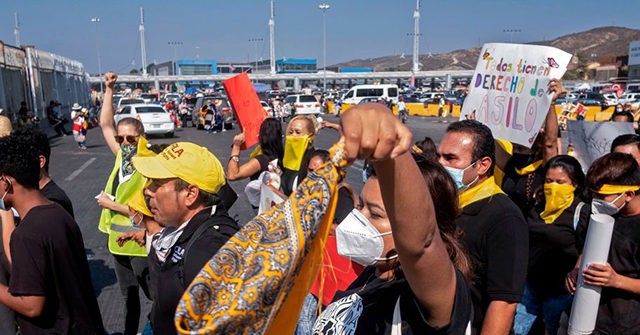 Joe Biden’s team plans to abandon agreements with Central American countries that created a legal wall against global migrants, according to CBS News.

The Biden team also hopes to have U.S. embassies fly foreign children to their migrant parents throughout the United States, according to the November 11 report. The embassy process would bypass the coyotes and cartels and allow illegal populations to burrow into U.S. society — much to the disadvantage of less-skilled Americans.

A source familiar with the Biden team’s planning said the incoming administration will withdraw from the three bilateral agreements Mr. Trump brokered with Guatemala, El Salvador and Honduras that allow the U.S. to send rejected asylum-seekers to those countries and have them seek refuge there.

Trump’s diplomatic deals allow U.S. border agencies to easily and cheaply fly asylum-claiming migrants from Latin American, India, or Africa back to the safe countries they crossed on their journey to the U.S. border. This process minimizes migration to the United States by reviving the traditional rule that requires migrants to ask for asylum in the first safe country they reach.

So far, few migrants have been sent back to these countries. However, Trump’s diplomatic wall — as well as the steel border wall — showed many millions of would-be migrants that they would not be able to get into U.S. workplaces by just asking for asylum.

Without Trump’s legal wall, U.S. border agencies may be forced to admit a growing tide of asylum-seeking Africans, Indians, and South Americans so they can apply for asylum. The incoming population will likely cause massive backlogs in U.S. courtrooms, so allowing the migrants to get work permits for U.S. jobs, so driving down wages for working-class Americans.

Migrant inflows cut wages for unskilled Americans, drive up their apartment rentals, and crowd the schools needed by their children.

The proposed revival of President Barack Obama’s Central American Minors (CAM) program would allow many more emigrants to leave their kids at home while they sneak into the United States.

Currently, many migrants leave their children at home and use their wages from U.S. jobs to hire coyotes to deliver their children to the U.S. border.

Since Obama’s first term, border agencies have relayed the coyote-delivered children — dubbed “Unaccompanied Alien Children” (UAC) — to the Department of Health and Human Services. The department then relays the children to volunteer “sponsors” — usually parents or close relatives of the foreign children.

In 2014, the flood of UAC migrants overwhelmed Obama’s border agencies, generate a media storm, and wrecked his poll ratings. His deputies quickly created the CAM program to help deliver the migrant children while minimizing media coverage. In 2015, Breitbart reported:

According to officials at the State Department and U.S. Citizenship and Immigration Services, as of Monday the Obama administration has received 4,253 applications for the CAM program. So far only 90 applicants have been interviewed.

The CAM children would only be delivered to migrants who are “authorized to be in the country,” according to CBS.

But that term can be very broad. For example, it can include economic migrants who are appealing for asylum to stay in the United States, as well as migrants whose asylum or deportation cases were set aside because of the logjam.

He promised to “reassert America’s commitment to asylum-seekers and refugees” to wipe out Trump’s asylum reforms, bar any deportations for 100 days, and end migration enforcement against illegal aliens unless they commit a felony.

Migration moves money from employees to employers, from families to investors, from young to old, from children to their parents, from homebuyers to real estate investors, and from the central states to the coastal states.

Biden claims the US is a ‘nation of immigrants.’
So Guatemala’s gov’t want him to grant a quasi-amnesty to 700K+ Guatemalan migrants.
Next up: Honduras, El Salvador, India ..
Ideal for Biden’s donors .. b/c migration moves money from workers to Wall St. https://t.co/FHHsAncVSz

If teachers won’t go back to school, why are they getting the vaccine ahead of others?

Biden says he doesn’t want to ‘cherry-pick’ individual items in $1.9...

It Didn’t Take Long for Biden to Completely Flip Flop on...