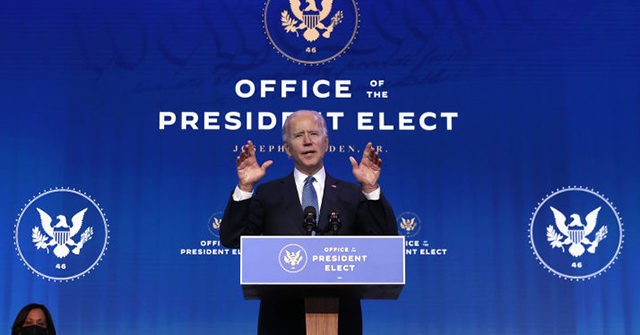 “They weren’t protesters — don’t dare call them protesters. They were a riotous mob, insurrectionists, domestic terrorists,” Biden said sternly in a speech Thursday.

The president-elect angrily excoriated Trump and his supporters for enabling the violence in the Capitol, during an event in Wilmington, Delaware, to introduce his nominations for the Justice Department.

“I wish we could say we couldn’t see it coming, but that isn’t true … the past four years we’ve had a president who’s made his contempt for our democracy our constitution the rule of law clear in everything he has done,” he said.

Biden defined Wednesday’s riots on Capitol Hill as one of the “darkest days” in American history describing it as “an assault literally on the citadel of liberty.”

The president-elect added that the Capitol Police failed to carry out “equal justice” by allowing the protesters into the building.

He said that his granddaughter Finnigan Biden sent him a photo of military soldiers from the Summer protests set up to guard the Lincoln Memorial from Black Lives Matter protesters, and pointed to the disparity of law enforcement response.

“No one can tell me that if it had been a group of Black Lives Matter protesting yesterday, they wouldn’t have been treated very, very, differently than the mob of thugs that stormed the Capitol,” he said disapprovingly.

Biden said that the incident was the result of Trump’s long record of disdain for American institutions, democracy, and the rule of law.

“Yesterday was but the culmination of that unrelenting attack,” he said.

Biden revisited four years of frustration with President Trump for challenging the government’s intelligence services, media organizations, and gassing “peaceful” protesters in Lafayette Square and again falsely claimed that the president “held the Bible upside down” for a “photo op.”

The president-elect also accused Trump of trying to “stack” the Supreme Court for the purpose of winning any electoral challenges in the 2020 election and attacking the Department of Justice.

Biden said that Trump was “trying to use a mob” to overturn the votes of 160 million Americans who voted for him.

“Our Democratic institutions are not relics of another age, they’re what sets this nation apart, they’re the guardrails of our democracy, and that’s why we have no president that’s a king,” he said.