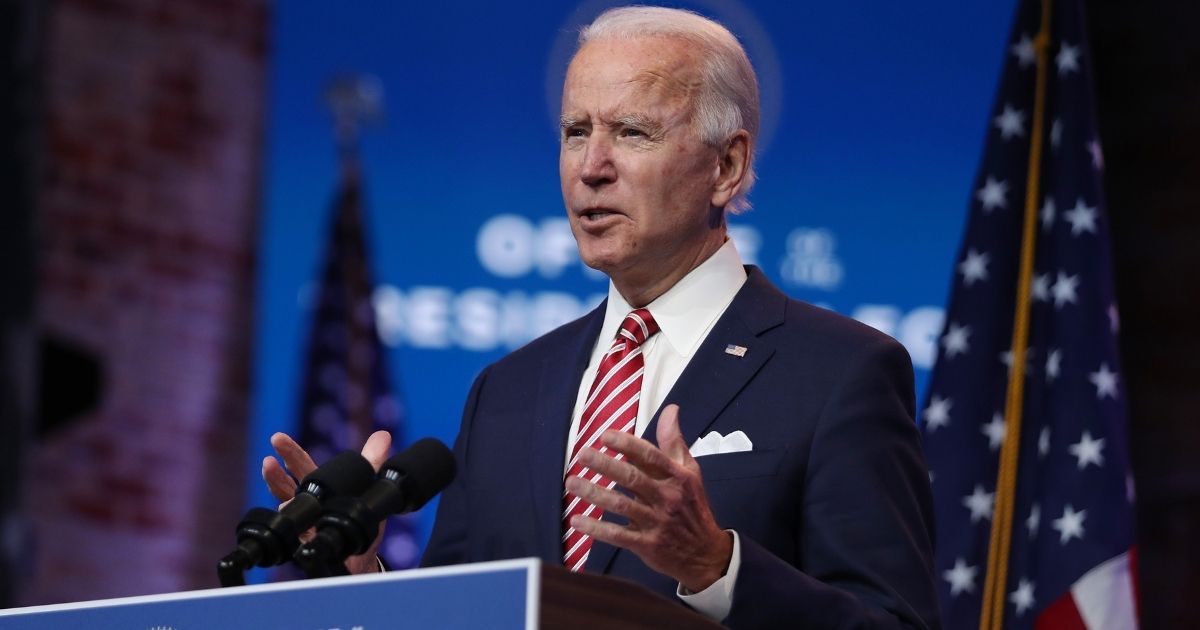 With mayors and governors issuing edicts about Thanksgiving celebrations that are unlikely to be followed, it’s good to see that the presumptive president-elect is getting on with it, too.

During the question-and-answer portion of a speech delivered Monday in Delaware ostensibly focused on the economy, Joe Biden said he would “suggest five people, maximum 10 people” who have previously quarantined attend Thanksgiving celebrations so “that we’re able to be together next Thanksgiving, next Christmas.”

“Let me tell you what the health experts have said to me. And it’s not because I’m unique and president-elect,” Biden said in response to a question about what his message would be to those who were going to be celebrating Thanksgiving.

“They strongly urge that if in fact we’re going to have Thanksgiving with anyone, that we limit it to a maximum, maximum, they suggest five people, maximum 10 people, socially distanced, wearing masks. And people who have quarantined.”

“Jill and I spent this morning, like many of you, trying to figure out, ‘What are we going to do for Thanksgiving? How are we going to do it?’ And we’ve narrowed down which family members, and that they were tested, recently tested, within 24 hours.

“And so I would strongly urge for the sake, not just your sake, for the sake of your children, your mother, your father, your sisters, your brothers, whoever you get together with at Thanksgiving, think about this. There should be no group more than 10 people in one room, I mean, inside the homes. That’s what they’re telling me.”

Biden added that there was “nothing macho about not wearing a mask,” noting that “I have the more potent mask behind this one, I took it off when I came out here, I wear it inside this” and that “to be masked saves lives.”

Should Thanksgiving be severely curtailed this year?

The former vice president was referring to his habit of wearing an N95 mask under a regular mask — something that may be great messaging for his brand but has no demonstrated scientific benefit whatsoever.

Biden is hardly the first politician to call for stringent constraints on holiday celebrations. Unlike most of the people calling for similar restrictions, however, his remarks don’t have the force of law.

In California, authorities announced that gatherings mustn’t be composed of any more than three households, with members of different households sitting six feet apart. In so-called “purple-tier” counties — those worst hit by the virus — gatherings must be held outdoors.

One problem is that, as of Monday, 94 percent of California’s population was under the purple-tier restrictions. According to Politico, Democratic Gov. Gavin Newsom pulled an “emergency brake” on the state’s economy, saying that the case surge was “simply without precedent in California’s pandemic history.”

Another problem is that Gov. Newsom is awfully good at delegitimizing his own advice. Just ten days before he pulled an “emergency brake” on gatherings, according to the San Francisco Chronicle, Newsom attended the birthday party of a close adviser with more than three households present. The party was at an exclusive Napa Valley restaurant, meaning it was technically legal under the guidelines, which didn’t include eateries.

Newsom claims he didn’t know how many people would be at the party and said that he “made a bad mistake.”

Several mayors whose cities saw large celebrations when the establishment media called the election for Joe Biden have also issued bans on gatherings or have implored residents not to have them.

In New York City, Democratic Mayor Bill de Blasio said his constituents shouldn’t have “big indoor gatherings, big meals together” during the holidays. This was on Nov. 9, just two days after this scene in Times Square:

Yes, this was outdoors — but given that Times Square isn’t known as a residential area, you wonder how many of these individuals got there via the subway, buses or Ubers.

In Chicago, Democratic Mayor Lori Lightfoot’s administration isn’t allowing gatherings of more than 10, either indoors or outdoors, telling residents they “must cancel the normal Thanksgiving plans.”

Here’s her at an outdoor pro-Biden celebration (which seems to involve more than 10 people) just days before she issued the advisory:

This is a great day for our city and our country. We are taking our democracy back. #BidenHarris2020 pic.twitter.com/OAZQPd1r4y

For whatever it’s worth, Biden never waded out into these celebrations himself — although he never discouraged them, either.

Even if Biden’s pronouncements don’t have the force of law, they’re still more outré than what we’ve seen before.

Remember, these aren’t supposed to be “because I’m unique and president-elect.” Biden says that we should ideally only have five people at a gathering, all of whom are masked, have quarantined and have been tested within the past 24 hours. He says that’s “what the health experts have said to me;” he doesn’t name these health experts.

But there’s the rub: I’m sure this is all very doable when you’re unique and the presumptive president-elect. For the rest of us, this isn’t feasible — which means those innominate health experts say we shouldn’t be doing anything at all.

I’m unaware of anyone who hasn’t adjusted their Thanksgiving plans due to COVID-19.

To the extent there are voices on social media insisting they’re going to be doing things just the way they’ve always done them, they’re usually saying it as a rejoinder to rhetoric like Biden’s, yet again proof there isn’t a liberal alive who understands the natural human response to having one’s life micromanaged.

As proof, I’d offer what happened on the Fourth of July in Los Angeles after authorities banned all fireworks and canceled outdoor fireworks celebrations for fear of causing a super-spreader event:

Instead of people adjusting their behavior accordingly, particularly if they were in an at-risk group or in contact with those who were, people were stripped of agency and then reflexively took that agency back.

Biden’s remarks are a symptom of a strain of liberalism that refuses to learn from this — or any other — lesson about human nature that COVID-19 has revealed.

However this ends, I guarantee it won’t be with five people sitting six feet away from each other, Zooming with the rest of the family and trying to figure out how to get bites of cranberry sauce under their two masks, all because Uncle Joe told them to.

Activist Groups That Support Terrorists Organize Anti-Israel Protests Across US