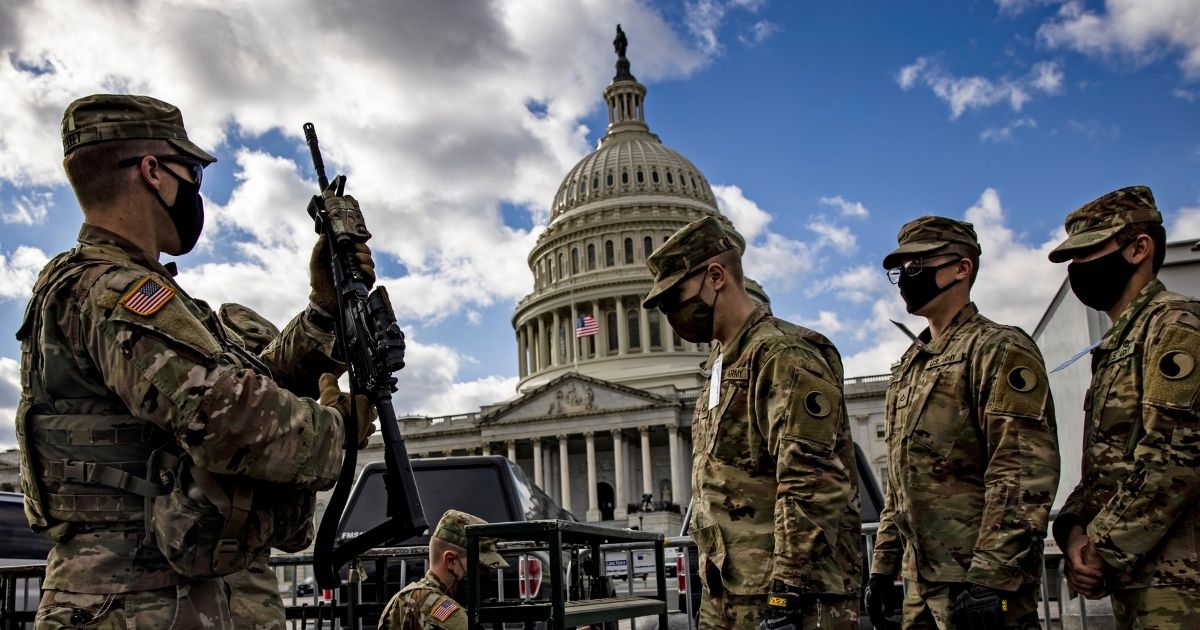 First, we needed the troops in Washington, D.C., to prevent an attack at the inauguration. Now, we need to make sure the troops we sent there aren’t the ones that carry it out.

According to a report by The Associated Press, the FBI is currently in the process of vetting the 25,000 National Guard members who will be on duty in the 68-square-mile District of Columbia for President-elect Joe Biden’s inauguration on Wednesday amid concerns there might be an insider attack during the festivities.

The massive influx of troops was sent amid concerns armed outside groups might be coming to Washington ahead of the inauguration. However, we’ve apparently gotten to the point where the phone call might be coming from inside the house.

Army Secretary Ryan McCarthy said authorities hadn’t seen any evidence of a threat, nor had the vetting brought anything to light yet, the AP reported.

”We’re continually going through the process, and taking second, third looks at every one of the individuals assigned to this operation,” McCarthy told the AP. Members of the Guard are also being told how to spot potential insider threats from the military.

The military already monitors its ranks for potential extremist links, but the FBI vetting is being done on top of that.

“The question is, is that all of them? Are there others?” McCarthy told the AP. “We need to be conscious of it and we need to put all of the mechanisms in place to thoroughly vet these men and women who would support any operations like this.”

The head of the National Guard Bureau said there was a robust process for identifying insider threats.

“If there’s any indication that any of our soldiers or airmen are expressing things that are extremist views, it’s either handed over to law enforcement or dealt with [in] the chain of command immediately,” said Gen. Daniel R. Hokanson, according to the AP.

Do we need this many troops deployed in Washington?

McCarthy reiterated the potential threat from armed groups coming to the capital, citing intelligence reports. Those reports, presumably, were along the lines of those received by the FBI. Last week, ABC News reported the bureau sent reports to state and local authorities warning of protests at state capitols and the potential of some sort of militia coming to Washington on Saturday to protest a potential 25th Amendment removal of President Donald Trump.

“The FBI received information about an identified armed group intending to travel to Washington, DC on 16 January,” the FBI’s bulletin stated. “They have warned that if Congress attempts to remove POTUS via the 25th Amendment, a huge uprising will occur.”

The FBI has “received information about an identified armed group intending to travel to Washington, DC on 16 January. They have warned that if Congress attempts to remove POTUS via the 25th Amendment a huge uprising will occur,” according to a bulletin obtained by @ABC

This was cretinous on a number of levels if true, not the least among them that Congress has no authority to initiate a presidential removal via the 25th Amendment. That would have to be started by the vice president and the cabinet — and didn’t happen, anyhow.

McCarthy, not insensibly, said the most important thing is for the inauguration to go off without incident.

“This is a national priority. We have to be successful as an institution,” the Army secretary told the AP.

“We want to send the message to everyone in the United States and for the rest of the world that we can do this safely and peacefully.”

This is understandable, and yet we have this:

I spotted these National Guard troops at a normal Washington street corner not even near the Capitol. So many streets have been closed. It reminds me of the war zones I saw in Baghdad or Mosul or Falluja. So sad. pic.twitter.com/la1Ixiva0D

A capital teeming with more troops than are currently in Afghanistan doesn’t bespeak a process done “safely and peacefully. (As of Friday, there were about 2,500 U.S. forces in Afghanistan, according to Military Times — a relative handful in the theater of the longest-running war in our nation’s history.)

Both the left and right will speak, when the moment suits them, on the potential for overcorrection in times of national tragedy. There are volumes of used books from circa 2004 warning us about the excesses of the Patriot Act, the Iraq War and post-9/11 America that can be picked up for a dollar or so on Amazon right now. Most of these books were hastily assembled and still aren’t worth our time — yet, not all of the arguments made therein are irrelevant.

What we know at present about the Jan. 6 Capitol incursion is that the National Guard was called in slowly and in a confused manner. Outgoing Capitol Police Chief Steven Sund told The Washington Post he requested National Guard presence two days before the rally but was denied by House and Senate sergeants at arms concerned about “optics,” among other things.

When the National Guard was eventually called in, it was unclear what role Trump played, if any.

A news release from acting Secretary of Defense Christopher Miller on the day of the incursion didn’t mention Trump and reports said the president resisted sending in the Guard initially.

Meanwhile, The Washington Post reported Jan. 7 that the Pentagon hamstrung the Washington, D.C., National Guard by reminding it of a narrow mission requested by the District’s mayor, Muriel Bowser.

While the full picture needs to be fleshed out, we can safely assume there were failures on multiple levels. However, at the other end of the overcorrection spectrum is — well, 25,000 troops in the capital, for starters, to ensure the “peaceful” transfer of power.

When it comes to warnings about armed groups, there hasn’t been a bang but a whimper. While it’s early to spike the football on this one — and I hope this doesn’t sound awful in a few days — the movement on state capitols hasn’t been overwhelming:

Here in my deep-red state, the only MAGA diehard to show up to the State Capitol to protest today was some dude named Austin who was disappointed that he was all by himself. https://t.co/Bb4IdBgLqQ

So far, there’s been the arrest of one man who allegedly tried to enter an inauguration security checkpoint with a handgun and 500 rounds of ammunition on Friday, according to The Washington Post. He reportedly had unauthorized credentials and right-wing bumper stickers on his truck. Troubling perhaps — and yet, a threat one would hope a lesser show of force would have ferreted out.

(The man told The Post he’d made an “honest mistake” and gotten lost in D.C.  and had simply forgotten he’d had the Glock in his truck. He was released on his own recognizance, The Post reported.)

In short, if we’ve come to the point where we feel we need to vet the 25,000 troops sent to secure the District of Columbia for extremist ties, maybe they aren’t the problem. There’s a place for a strong military presence in the face of national emergencies, although The New York Times wasn’t quite as enthusiastic about admitting it when Arkansas GOP Sen. Tom Cotton suggested as much in a commentary piece last summer.

Proportionality is key, however. All that was needed to stop the Capitol incursion was a smart, reasonable National Guard presence. Instead, there seems to have been a concatenation of errors that led to what we saw Jan. 6.

To prevent a repeat on Jan. 20, we didn’t need the kind of force that dwarves the one we deploy to maintain some modicum of peace in Afghanistan — and then worry that force might be the problem, too.

Nothing Says 'America Is Back' Like Taking Someone's Job