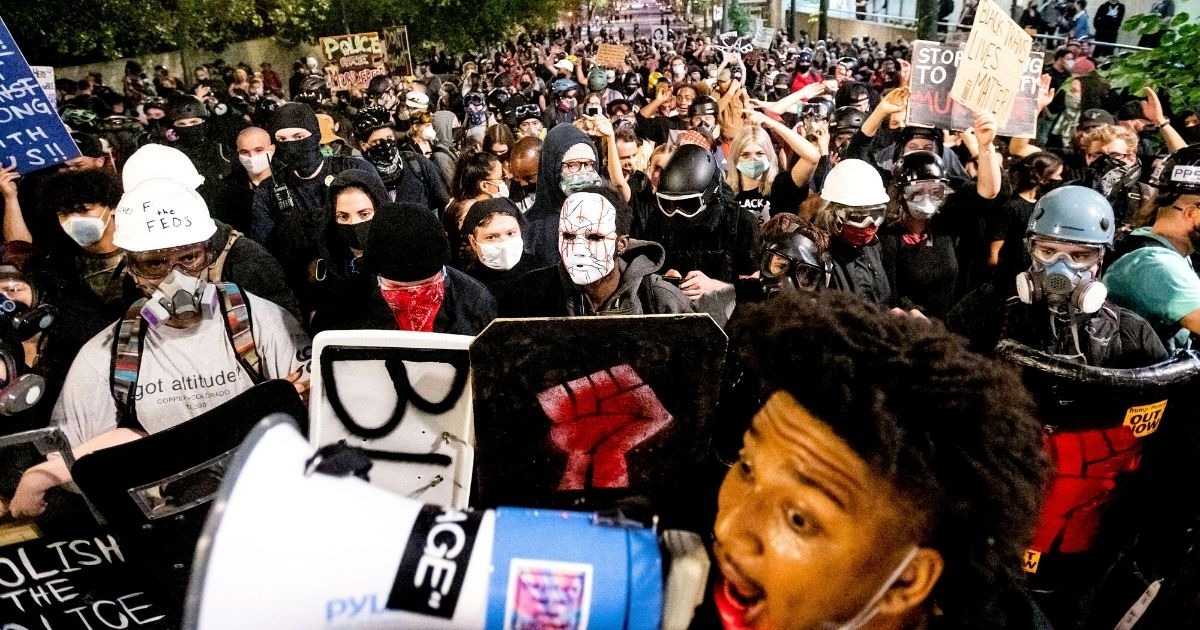 U.S. Attorney’s Office, District of Oregon, Sept. 25, 2o20: “Local residents and anyone traveling to Portland with the intent to commit violence are on notice. There will be consequences for acts of violence. The U.S. Attorney’s Office is committed to prosecuting people who impede or assault law enforcement officers, damage federal property, and set fire to buildings.

“Make no mistake: those who commit violence in the name of protest, will be investigated, arrested, prosecuted, and face prison time.”

An investigation by KGW-TV in Portland found that 31 of the 90 federal cases brought against those involved in the Portland riots last summer have been dropped by the Department of Justice, meaning a little more than one-third of potential defendants won’t even have a chance of seeing the inside of a courtroom for their roles in the riots.

Furthermore, over half of the cases dropped were “dismissed with prejudice,” which means the case can’t be brought again. It’s a move prosecutors describe as being extremely rare.

At least four of the defendants who had their cases dropped were charged with assaulting a federal officer, a felony. Other felonies were among the cases dismissed. At least 11 of the 31 cases were dropped on or after President Joe Biden was inaugurated on Jan. 20.

Billy Williams, the former federal prosecutor for the District of Oregon who issued the dire statement about putting those “with the intent to commit violence … on notice,” said the decision was made based on whether they thought the cases could be proven beyond a reasonable doubt.

“Each case was analyzed for the evidence that we had at the time,” Williams told KGW. “Careful decisions were made on whether or not someone should be charged based on the evidence.”

“Everything is case-specific when you go about these cases being processed through the system,” he added.

Williams stepped down on Feb. 28 as part of the usual turnover of federal prosecutors under a new administration. He insisted the decision to press or drop the charges wasn’t based on politics.

“I’ve never made a decision in my career based upon political pressure or institutional pressure,” he said.

This is key because, as KGW points out, the decision to press the charges came largely because local officials were passing on prosecuting rioters.

“But when Multnomah County District Attorney Mike Schmidt passed on most protest cases saying he was reserving resources for the most serious crimes, the feds stepped in. Then-Attorney General William Barr reportedly instructed federal prosecutors to aggressively pursue protesters deemed violent or destructive,” the outlet added.

“By summer’s end, scores of people would be arrested on various federal charges by agents guarding the federal courthouse in Portland. The names and ages of those arrested were published by the U.S. Department of Justice and U.S. Homeland Security in press releases. Additionally, photos of defendants’ belongings, from helmets to gas mask to goggles, were included in court documents.”

In other words, this wasn’t the Trump administration swooping in and throwing the book at someone blocking traffic and holding a “Remember George Floyd” sign. Here’s a sampling of mostly peaceful Portland last summer:

WARNING: The following videos contain vulgar language that some viewers will find offensive.

A preview of the 20 minutes of video I took during my first night in Portland. It shows rioters throwing projectiles + setting fires outside the courthouse. It then shows officers coming out to push the crowd back/put out the fires.

Earlier tonight: Antifa set fires in the building where Mayor Ted Wheeler supposedly lives, prompting police to declare a riot and disburse the crowd to allow firefighters at the scene. pic.twitter.com/OfASXps04p

And yes, they set a fire inside the building of the woke mayor of Portland because he wasn’t quite woke enough.

Nevertheless, the Multnomah District Attorney’s Office was pretty woke, at least when you consider it declined to file charges in 70 percent of the cases referred to it by the Portland Police as of October, according to The Oregonian.

And this was working out swimmingly for them at the time, believe you me: “Court records show at least 18 people have been arrested three or more times during demonstrations in Portland since May, most of them for crimes such as interfering with a police officer, riot and disorderly conduct,” The Oregonian reported.

“Nearly all charges against them have been dropped or remain under review, according to figures provided by the District Attorney’s Office.”

Willamette University law professor Laura Appleman believes the cases aren’t being dropped because of any political calculus but because prosecutors are managing their resources, according to KGW.

“The U.S. Attorney’s office has to go through and very carefully ask, ‘Is it worth using our limited time and energy to prosecute each and every of these federal misdemeanors?’” she said.

This depends. Portland is still used as a byword for the kind of selective law enforcement that allows left-aligned violence and criminality to fester under the notion that it’s “good violence.” (Or not really violence or criminality at all, for that matter.)

Furthermore, this kind of rioting was already a problem endemic to Portland and a handful of other cities when these charges were being pressed. It still is a problem in Portland long after most everyone else went back to tweeting about “WandaVision.”

Finally, the Department of Justice was clear: “There will be consequences for acts of violence.” There weren’t — and not just in cases of federal misdemeanors, but where individuals were charged with assaulting federal officers. They were dismissed with prejudice, an unusual move. In other words, there was no deterrent to this happening in the future.

Should prosecutors have dropped these charges?

And no, future reoccurrences of this aren’t just hypotheticals. On Monday, the trial of Derek Chauvin — the police officer accused of killing George Floyd while he was in police custody, touching off the powder keg that was the summer of 2020 — is set to begin. Many feel the prosecution’s decision to seek a second-degree murder conviction against Chauvin is a reach, given the evidence.

If Chauvin ends up being acquitted, we could swiftly discover the error in disregarding the deterrent effect of criminal charges because we didn’t quite mind the political sentiment that led to the criminality — especially in Portland.