H.R. McMaster, President Donald Trump’s former national security adviser, expressed his concerns about a potential resurrection of the Iran nuclear deal under a Joe Biden presidential administration Wednesday during an interview with Bret Baier. He called a return to the agreement a “big mistake.”

Baier opens the segment by mentioning a 2019 report by a United Nations-affiliated nuclear watchdog that said that Iran was making enriched uranium beyond limits, thus breaching the terms of the nuclear deal. The Trump administration withdrew from the deal, also known as the Joint Comprehensive Plan of Action (JCPOA), in 2018, and has implemented numerous sanctions on Iran, including on key parts of the country’s oil industry.

McMaster said he was concerned about national security during the transition period between presidencies, especially as foreign adversaries like the “Chinese Commnunist Party to Vladimir Putin to jihadist terrorists” and Iran may seek to take advantage of “weakness and division.”

Baier asks McMaster if he’s concerned about a Biden presidency and policy relating to tension with Iran.

“It would be a really big mistake, Bret, to try to turn the clock back to 2016 and resurrect the Iran nuclear deal,” McMaster responds. “The Iran nuclear deal was a political disaster masquerading as a diplomatic triumph. It was a fundamentally flawed agreement, but what it didn’t do, it didn’t consider really two fundamental issues that we have to take into consideration when you’re dealing with Iran.”

“First of all, the hostile ideology of the regime,” he continues. “The ideology of the revolution and, secondly, this 4-decade-long proxy war against us and the big payoffs to Iran when the deal was signed as well as the relief of sanctions. What did they do with that money? They applied that money to intensifying the sectarian violence across the region in an effort really to put a proxy army on the border of Israel.”

A staff removes the Iranian flag from the stage after a group picture with foreign ministers and representatives of Unites States, Iran, China, Russia, Britain, Germany, France and the European Union during the Iran nuclear talks at Austria International Centre in Vienna, Austria on July 14, 2015. (Photo by CARLOS BARRIA/POOL/AFP via Getty Images)

The JCPOA was reached between China, France, Germany, Iran, Russia, the United Kingdom, the United States, and the European Union in 2015 to place significant restrictions on Iran’s nuclear program in exchange for sanctions relief. Trump withdrew from the agreement, claiming it was not effective in curtailing Iran’s missile program, according to the Council on Foreign Relations.

Although Europe tried to salvage the agreement, Iran allegedly began flouting the limitations in 2019. 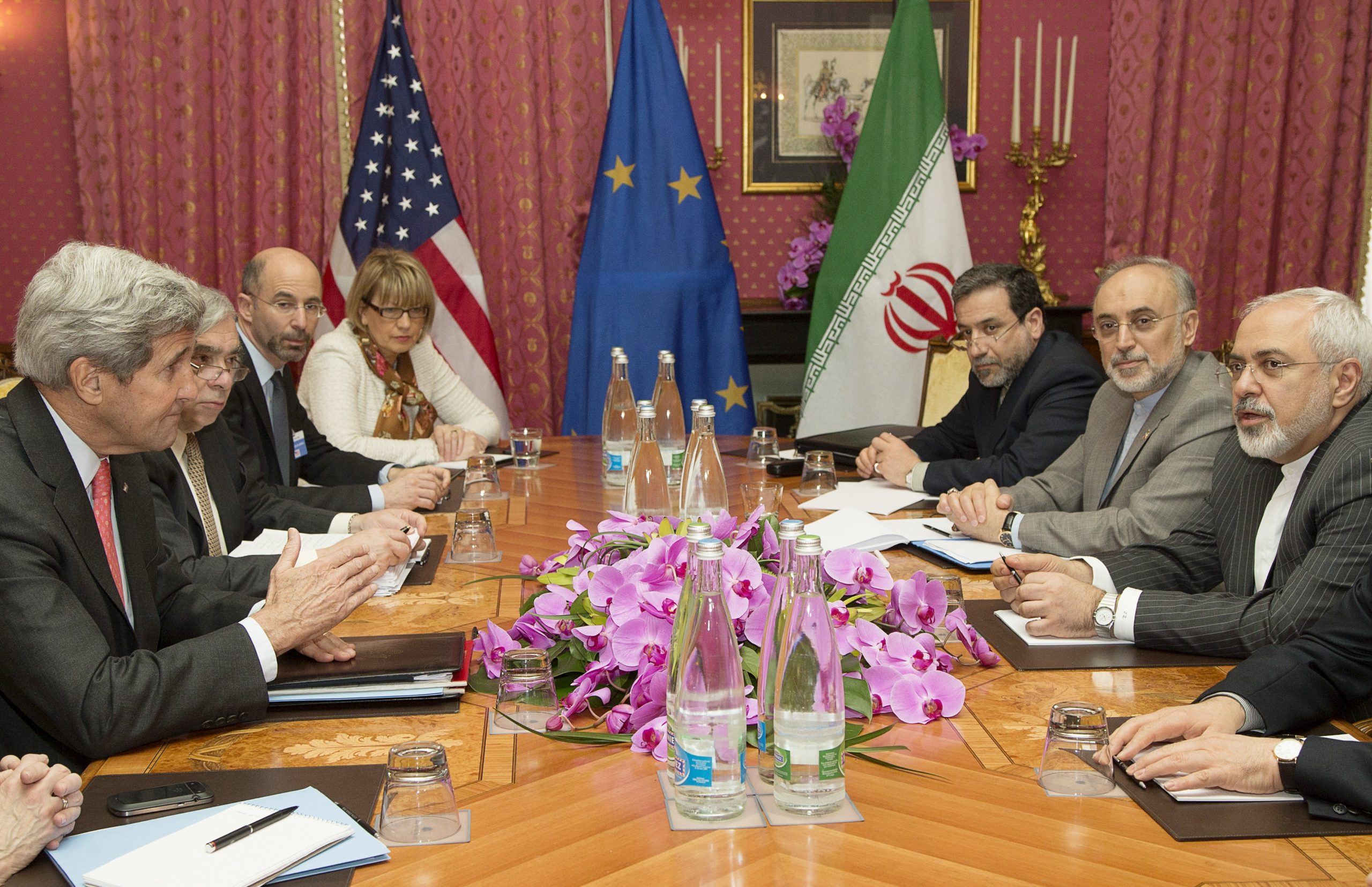 US Secretary of State John Kerry (L) expresses his condolences over the death the of the mother of Iranian President Hassan Rouhani (unseen) before a negotiation session with Iran’s Foreign Minister Javad Zarif (R) over Iran’s nuclear program in Lausanne March 20, 2015, as European Union Political Director Helga Schmid (4-L) looks on. (BRIAN SNYDER/AFP via Getty Images)