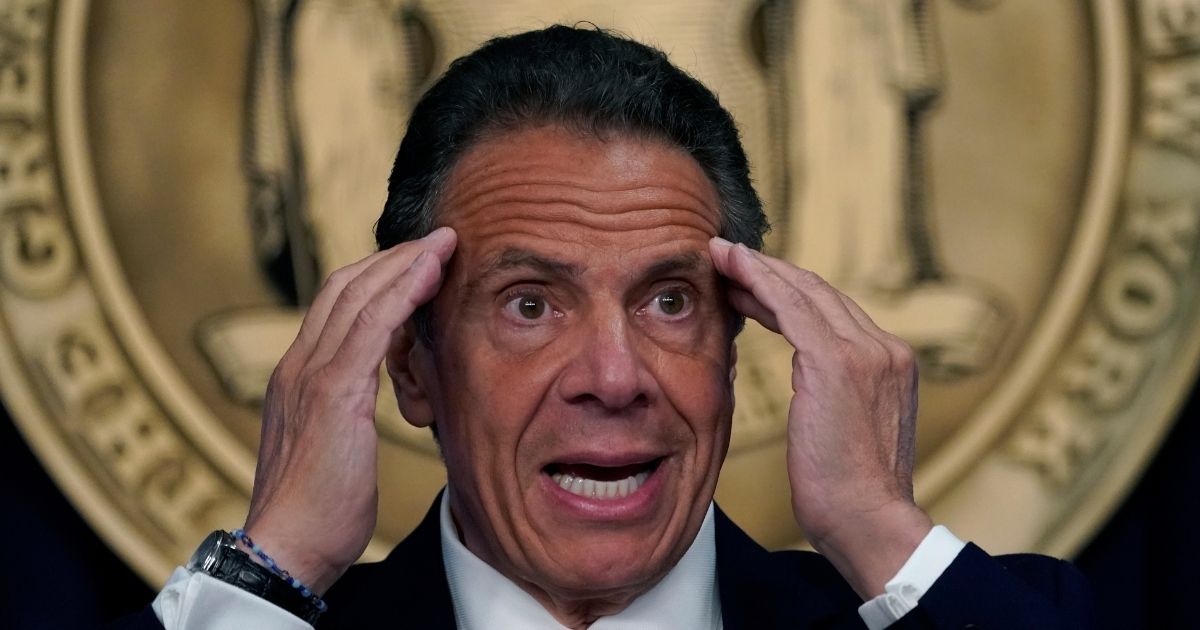 There were plenty of unpleasant neologisms spawned by the annus horribilis 2020 — “COVID,” “social distancing,” “zoombombing” — but the most unfortunate may have been “Cuomosexual.”

During the early days of the pandemic, back when Democratic New York Gov. Andrew Cuomo would hold marathon coronavirus news briefings that would rival Fidel Castro’s harangues for length and misplaced energy, 68-year-old Melissa Stephens became patient zero for that ill-starred term. According to New York Magazine’s The Cut, the sexagenarian was such a fan of these filibusters-of-one that her daughter made her a shirt that said: “I’m a Cuomosexual.”

The rest is history, as is the term.

It once trended among liberals. Now it’s used as a hashtag by snarky conservatives. Last year, Trevor Noah told Ellen Degeneres “[t]here’s a group of women who came out and they said, ‘We’re falling in love with Cuomo,’ and I said, ‘Well, yeah, everyone should be a Cuomosexual in that way,'” according to The Federalist.

Here was Noah on March 1, after Cuomo had been credibly accused of sexual impropriety by multiple female aides: “You know that it’s not good when you’re the person in trouble, and you’re like, ‘Guys, please, remember all those people in nursing homes I got killed? Let’s talk about that again.’”

There’ll always be true believers, though — the doomsday cult members who stay around long past the predicted end of the Earth and after the soi-disant prophet has been indicted for mail fraud.

In that vein, meet the denizens of the Facebook group “Women for Governor Cuomo” — which, according to a Sunday Wall Street Journal report, is “a private fan club of about 1,100 members who are mostly women over age 55” whose members have, among other things, allegedly flooded a hotline set up for whistleblowers who may have been harassed by the governor, leaving positive messages of support for Cuomo instead.

“Support for the governor is what brought us all together,” said group moderator Pamela Morley, who also acts as treasurer for another Facebook group that raises money for Cuomo-related causes.

Die-hard fans of Andrew Cuomo are rallying around the New York governor, who faces calls to resign. One group calls itself “Women for Governor Cuomo.” https://t.co/aSumcxBnVo

“Women for Governor Cuomo” itself has raised upwards of $30,000 to spend buttressing Cuomo’s image, including on rallies and billboards supporting the embattled governor.

Proud to have donated to this Billboard and Proud Supporter of my Governor, Andrew Cuomo pic.twitter.com/j95WHrhm0s

Their demographics skew toward the Melissa Stephenses of the world; data from the Facebook group indicates that 70 percent of members are women over the age of 55. There’s a bit of grim irony there: Not only are they from the gender Cuomo allegedly likes to predate, they’re also in an age bracket where they’re closer to a nursing home than they are to the college dorms. (Not to be cruel, but just saying.)

Morley is among the younger members of “Women for Andrew Cuomo;” the 41-year-old Buffalo-area theater director says she thinks the allegations against the governor are politically motivated. Say what you will about the likelihood of that — that everyone accusing the governor of improper behavior is either a political rival or a secret Republican looking to take down the house of Cuomo from within — it’s actually better than the alternative, group members who don’t believe the behavior is impeachable.

“There’s nothing that an HR professional couldn’t have handled,” said 68-year-old Sandy Behan, a former marketing professional and group moderator. “One of the things they said was he gave everyone roses on Valentine’s Day. I think that’s a great thing.”

The vast majority of the accusations, it’s worth noting, aren’t rose-related.

“One current aide accused Mr. Cuomo of groping her in the governor’s executive mansion last year. A former aide, Ana Liss, said when she worked in the governor’s office Mr. Cuomo called her sweetheart, touched her on her lower back at a reception and once kissed her hand when she rose from her desk.”

Then there’s the fact members have bragged in the Facebook group about flooding a tip hotline set up by impeachment investigators and leaving pro-Cuomo messages. They’ve also been involved in Twitter campaigns against the accusers, something Morley isn’t exactly cracking down on.

“What I’ve told them is if they want to do that, to not be a jerk, because then it’s going to make us look bad,” Morley told The Wall Street Journal.

And here’s Morley being a jerk and making her cohort look bad — tweeting at one of Cuomo’s first accusers, Lindsey Boylan, that “We are coming for you and the rest of our Governor’s accusers….We won’t let you get away with this.”

The Women of New York and this Country see through your lies…We are coming for you and the rest of our Governor’s accusers….We won’t let you get away with this…Just know that 😉

And here she is responding to Boylan a few days later, responding to a tweet where the Cuomo accuser said “I guess a lot of people just don’t give a s*** if the governor of New York abuses women.”

Oh we do…That’s IF he was abusing people…BUT he’s not so…🤷‍♀️What we do care about is LIARS trying to accuse him without evidence and and trying to get others to do so as well just for political gain…How much are you getting paid for all this? Honest question…

Remember, group members: Be not jerky. Don’t do anything Pamela Morley wouldn’t do. And don’t do quite a lot of the stuff she does, either.

Anyhow, after reading The Wall Street Journal’s inside story on the group — complete with reports of flooded sexual harassment tip-lines, targeted Twitter harassment campaigns against Cuomo accusers and moderators who think this is all just overly sensitive women who took a dozen roses on Valentine’s Day the wrong way — one would assume Morley would be on the warpath against the authors. One would be wrong:

After The Wall Street Journal aired all of the above (and more) to the world, Morley thought to herself, “Finally — some unbiased reporters who tell it like it is.” That alone should suffice for summary judgment.

Then again, it takes a strange type of individual to be a Cuomo stan in May of 2021. Even Melissa Stephens, who launched 2020’s most ugly neologism and wore the “I’m a Cuomosexual” sweatshirt daily until the allegations of sexual harassment against the governor surfaced, has given up on him.

“It just makes you want to cry,” she said. “It’s just so disappointing.”

Expect Pamela Morley to start a targeted Twitter campaign against Stephens once she gets bored of trolling Lindsey Boylan.

C. Douglas Golden is a writer who splits his time between the United States and Southeast Asia. Specializing in political commentary and world affairs, he's written for Conservative Tribune and The Western Journal for four years.

C. Douglas Golden is a writer who splits his time between the United States and Southeast Asia. Specializing in political commentary and world affairs, he's written for Conservative Tribune and The Western Journal for four years. Aside from politics, he enjoys spending time with his wife, literature (especially British comic novels and modern Japanese lit), indie rock, coffee, Formula One and football (of both American and world varieties).

Millions of Americans Will Soon Be Able to See a Colorful...