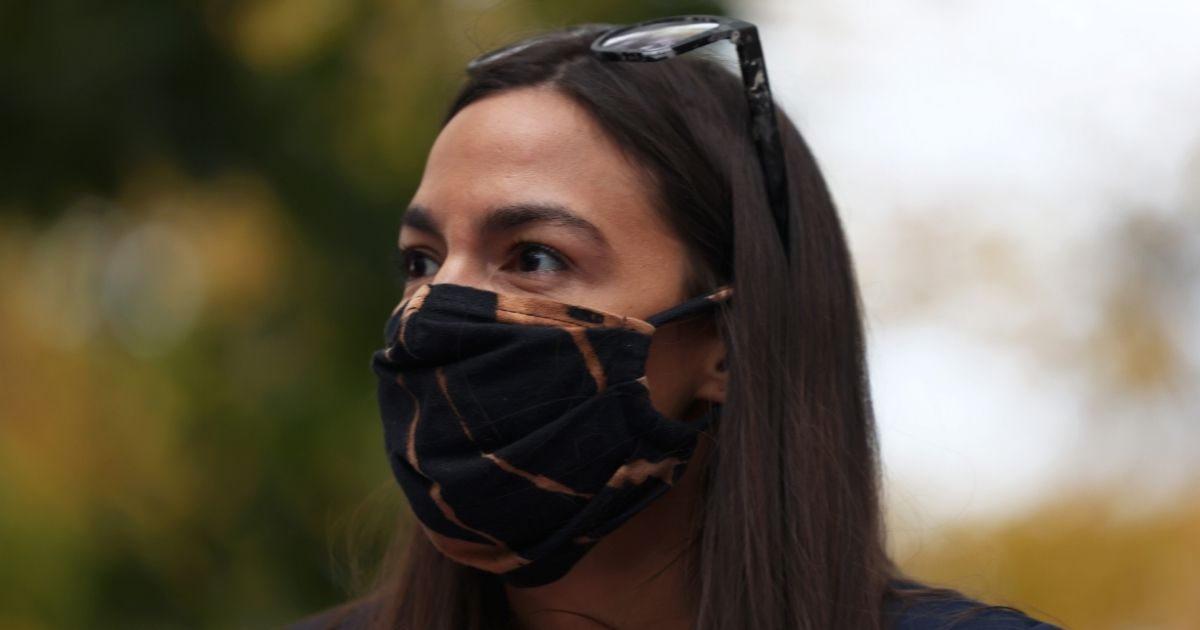 We could all use a bit of social distancing from Democratic Rep. Alexandria Ocasio-Cortez this holiday season — and for the next few decades, really, but we’re going to find a vaccine and she’s still going to be there.

In the meantime, this Thanksgiving her relatives in the Empire State, at the very least, will get a reprieve.

Less than a week after packed celebrations in Times Square for Joe Biden being declared president-elect by the establishment media — with the concomitant packed subway trains and packed apartments for the afterparties — New York Gov. Andrew Cuomo announced the state was cracking down on in-person gatherings ahead of the holidays.

In a news release Wednesday, the state said that “indoor and outdoor gatherings at private residences will be limited to no more than 10 people. The limit will be implemented due to the recent prevalence of COVID spread resulting from small indoor gatherings including Halloween parties. These gatherings have become a major cause of cluster activity across the state.”

“If you look at where the cases are coming from, if you do the contact tracing, you’ll see they’re coming from three main areas: establishments where alcohol is served, gyms, and indoor gatherings at private homes,” Cuomo said in a statement.

“The rules are only as good as the enforcement. Local governments are in charge of enforcement,” he continued.

“There are only two fundamental truths in this situation: it’s individual discipline and it’s government enforcement. Period. End of sentence. I need the local governments to enforce this.”

Even in a news release, they can’t make Andrew Cuomo sound breviloquent. But I digress.

Leading the charge here is Rep. Ocasio-Cortez (don’t you dare call her AOC!), whose turkey day plans were reported on Thursday by Politico’s Erin Durkin:

.@AOC Thanksgiving plan: She and her family will all cook from the same recipe, then eat over Zoom.

I’m guessing cable news broke into normal programming to report on this one.

Will they be using a dry rub? Tenting the turkey with tinfoil? If they’re going to deep fry it, will they be Zooming that, too? Inquiring minds want to know.

Well, anyway, AOC made sure everyone knew she was keeping positive about this development.

Time to get creative, folks! https://t.co/EyCvDNzpWv

This was some of the reaction, which shouldn’t have been unexpected:

This thanksgiving I had the creative idea to denounce your party’s ridiculous suggestions and mandates and throw a MASSIVE bash. My big family is going to gather just a couple feet apart (about a table’s distance) and we’re going to laugh and SING, and there’s nothing you can do.

I will do as I please, my government will NEVER tell me how to live my life, especially you. And you are not kidding anybody, your family on zoom??? Right.

This will be my largest Thanksgiving gathering yet

We’re getting really creative in our household.

We’re having about 20 people over. They’re each going to bring side dishes and we’re going to make the staples of Thanksgiving dinner.

No one will wear a mask. And we’re going to laugh and sing.

I knew we could make this work!

Here’s the thing. Many of us will, unfortunately, be taking a page out of this gentleman’s book on Thanksgiving:

You’re a LOT more creative than me. 🙂 I’m getting Cracker Barrel takeout and I’m going to eat it with my cat. pic.twitter.com/frRVU6ilKD

Even if we wanted to have the kind of good ol’ fashioned Thanksgiving we’d ordinarily have, that’s pretty much off the table because of garden-variety restrictions, air travel issues or relatives who simply would have avoided large gatherings without official guidance anyhow.

Most of us would probably be meeting in small groups locally — likely less than 10 people. We could manage on our own.

Do you think Andrew Cuomo’s coronavirus restrictions will be successful?

Meanwhile, the capacity of law enforcement to do anything about this seems limited in this situation — particularly in places like New York City, where it’d be nigh impossible for the police to actually discover most gatherings of over 10 people, much less break them up.

But, hey — AOC has scored some virtue-signaling points by letting us all know she’s going to be Zooming her dinner. Way to go.

I’m sure Ocasio-Cortez’s family will miss her this Thanksgiving.

As for the rest of us, we can take some solace knowing that, if we’re going about our regular gatherings this year, AOC will be looking at us like this in spirit:

That just makes the holidays all the warmer.