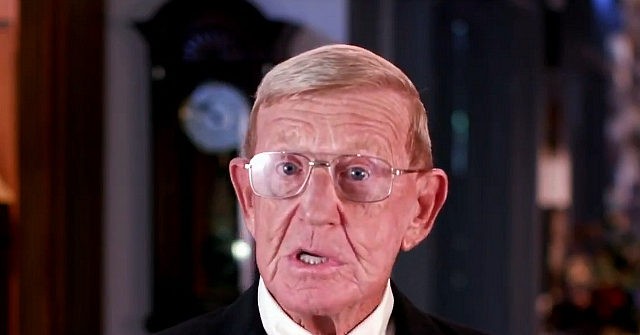 Holtz, 83, says that while he’s been weakened by the virus, he is recovering. “I don’t have a lot of energy right now,” told ABC Columbia.

Holtz led the Notre Dame Fighting Irish to the school’s last National Championship in 1988. More recently, the champion coach has made a name for himself as one of President Trump’s most outspoken supporters. Holtz made several trips all over the country giving speeches and trying to win support for the president’s re-election campaign.

During the campaign, Holtz was asked why he decided to hit the trail for Trump. His answer made it clear, that he wasn’t doing it for himself.

“I’m just one of these old-fashioned people,” Holtz said. “I’m an old person. It doesn’t mean much to me, but I’m doing this for my children, my grandchildren, their future and it’s something I believe.”

In September, Trump announced that Holtz would receive the nation’s highest civilian honor, the Presidential Medal of Freedom.

Holtz spent 33 years coaching for Notre Dame, South Carolina, William & Mary, North Carolina State, Arkansas, and Minnesota. Over that time, he compiled one of the winningest records in college football history, as his teams went 249-132-7. One-hundred of those wins came at Notre Dame, where a statue stands in his honor.

Holtz is also a member of the College Football Hall of Fame.