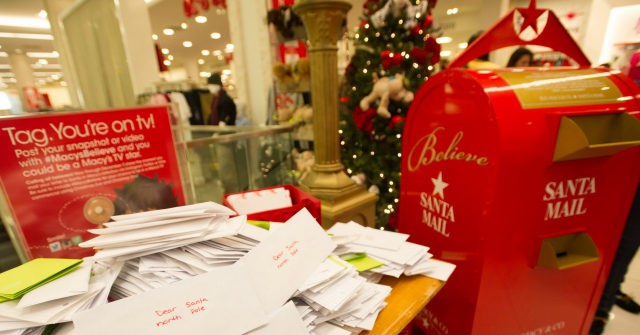 A little boy fighting leukemia worked as Santa’s helper recently while waiting for his Make-a-Wish dream to come true in Stockton, California.

On December 3, five-year-old Mateo gathered letters to Santa from people outside a Macy’s store and dropped them into a big red box labeled “Santa Mail,” according to CBS Sacramento.

In his own note to Santa Claus, he asked for a toy. But part of his gift would be the start of fulfilling his dream to become just like his hero, the mailman.

“When I hear him come, I just hurry to the window and watch him. He’s just nice to us,” Mateo explained.

His recent mission as Santa’s mailman was part of the Macy’s Believe campaign.

“For every letter dropped off, not only will you be supporting Mateo, but you’ll also be helping to grant more life-changing wishes to local children battling critical illnesses,” the campaign’s site read.

The website added that during the event that week, the store would “double their normal donation of $1 per letter to $2 per letter up to an additional $1 million! That money goes back to making wishes possible!!”

Mateo has battled leukemia for the past four years and is one of the children whose wishes could not be granted during the coronavirus pandemic.

Despite the change in plans, his mother said he will remember the special day “for years and years,” the Record reported.

“It means a lot. I think he needs something like this in his life that he’s never done before,” Cynthia Toscano noted. “He’s practically been a shut in all his life … so this is really a big deal for him and he’s so excited.”

In a press release, the Make-a-Wish Foundation explained, “Because his wish ties into mail and letters, and since the (Macy’s) Believe campaign is all about writing letters to Santa, we felt this was the perfect fit.”