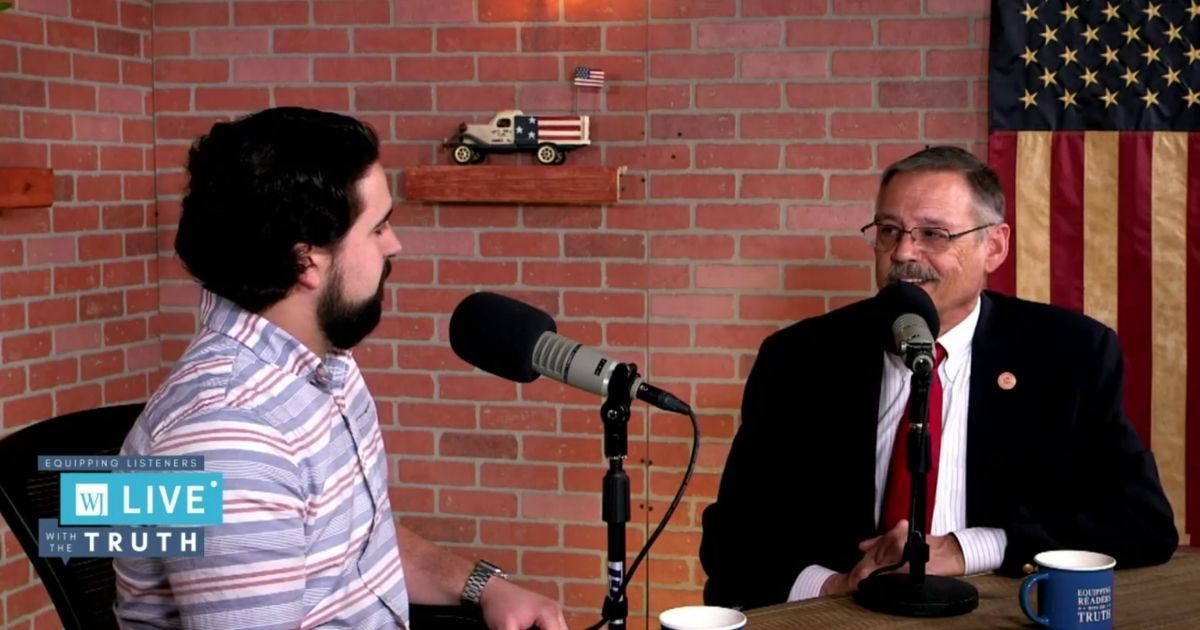 Through an arduous process of months in litigation, the Arizona state Senate recently obtained authorization to complete an audit of Maricopa County’s November election results.

Spearheading this charge in the state legislature is Republican state Rep. Mark Finchem of the 11th district.

The process, if conducted objectively, will allow lawmakers and the public to garner the necessary knowledge to dismiss any incorrect theories about election fraud and uncover areas where improvements are actually needed.

But his push for enhancing government transparency and accountability is shifting from the state legislative chamber to the office of Arizona’s secretary of state. On Monday, Finchem told “WJ Live” co-host Andrew J. Sciascia his primary goal is to reinstall public trust and confidence into a system that so desperately relies on it.

TRENDING: Biden Tries to Backtrack on Georgia Boycotts When He Realizes Whom They Actually Hurt

Fruitful change will occur, he added, once elected officials serve their office with an unbiased and objective outlook. A secretary of state should be leading the state toward a model of “fraud-free elections.”

If elected in 2022 to the position held by current Arizona Secretary of State Katie Hobbs, the representative plans to further implement a “program that would introduce ballot fraud countermeasures.”

“That helps us look into where are the potential places where we might find misbehavior on the part of nefarious actors who would prefer to have a predetermined outcome instead of one that is literally the voice of the people,” Finchem said.

The system “has built into it some pretty nifty fraud countermeasures that you see with black light.”

Do you support Finchem’s ideas?

“So you would know whether or not somebody had created a group of ballots and inserted them into the system that were not legitimate,” the state representative said.

“It highlighted the fact that anybody could print a ballot and insert that into the system without the recorders or the elections officials really knowing it.”

According to Finchem, the program would only cost about 20 to 25 cents per ballot to implement on the state level for Arizona.

“We will promote the idea of fraud-free elections, fair elections, where every legal vote counts,” Finchem said.

In the run-up to the 2022 midterm elections, Finchem urged Americans to ponder, “Are our elections as secure as the people who have an interest in the outcome say they are?”

At the state and national level, public figures have been tasked with giving credence to popular demands calling for change in the American electoral system.

Usual condemnations, such as those against the Electoral College and the first-past-the-post electoral system, are now joined by ones that reportedly seek to improve the system’s democratic character, integrity and transparency.

Democrats allege that the bill is intended to protect the voting rights of lower-income and minority voters. Republicans claim that the bill is rooted in a partisan attempt to rewrite federal election laws, in turn giving more authority to the national government at the expense of the state.

In early March, Georgia’s state legislature passed SB 202, which established the parameters around which post-pandemic elections procedures like absentee ballots and drop boxes will function in the state.

President Joe Biden denounced the bill as reminiscent of Jim Crow — a remark which may have contributed to Major League Baseball’s decision to remove the 2021 All-Star Game from the state’s capital.

“This law, like so many others being pursued by Republicans in statehouses across the country is a blatant attack on the Constitution and good conscience,” Biden said in a statement on March 26.

According to a recent Rasmussen report, however, 75 percent of likely American voters support laws that require a voter to show identification before casting a ballot.