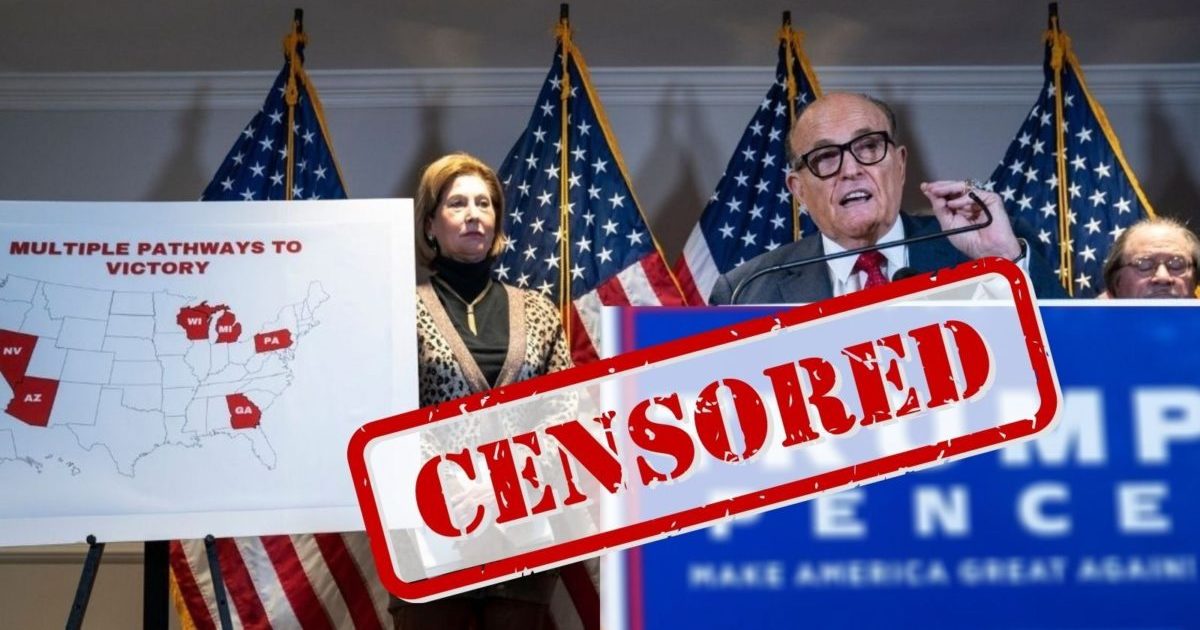 The Western Journal is at the forefront of the suppressed conservative news outlets, and without your involvement in this, people are going to go uninformed.

This was obviously a newsworthy event, even if — as the establishment media has falsely claimed — it was “bizarre” (The Guardian), “free-wheeling” (NBC News) or “crazy” (Salon). (It was actually a pretty typical news conference featuring multiple speakers; there was very little “crazy” about it.)

Why they held the news conference isn’t hard to guess — the establishment media, including the big tech companies of Facebook, Google and Twitter, won’t report on their claims, so they’re forced to take their message to the American people directly.

Unfortunately, Facebook didn’t want to let them do that, either.

However, one of Facebook’s fact-checkers slapped a “partly false” fact-check label over the video, which caused Facebook to limit distribution of the video on its platform.

As a result thousands fewer people could see the news conference on our page.

That fact check was bizarrely attached to this two-month old article, which had absolutely nothing to do with the news conference. Indeed, it would have to have been written by Miss Cleo to have had any connection with a news conference that happened eight weeks after it was written.

This morning, I contacted Facebook to inquire as to the justification for this fact check. How, I wanted to know, can The Western Journal be penalized for statements — even if they are untrue — that we had no way of knowing were going to be made during a live video?

I received no response. (This is not uncommon when Facebook realizes that it has made an error.)

However, not long after I sent my email, the “partly false” label had been removed. Score one for The Western Journal.

Nevertheless, when thousands less see our content because of suppression, even temporary suppression, it has a two-fold impact. First, people go uniformed, but second, our revenue is severely restricted.

What does all of this mean for you, our reader?

At The Western Journal, we are trying to cover this strange and potentially dangerous time in our country’s history the same way we try to do everything we do — by speaking as truthfully as we know how about the topics we write about and discuss on our daily “WJ Live” podcast.

We don’t do everything perfectly, but we strive to be the best that we can. And when our failures are pointed out to us, we are quick to correct them.

That’s not enough to appease the Big Tech Tyrants, apparently.

In fact, simply because we are trying to cover claims of election fraud fairly and accurately in an environment in which the establishment media’s orchestrated response to such claims is to deceive, inveigle and obfuscate, our ability to reach you with that truth is threatened.

We know, in short, that our commitment to the truth is going to cause us to be throttled by social media platforms, belittled by establishment media giants, and blacklisted by advertisers.

However, you’re not powerless against the schemes of the Big Tech Tyrants.

By subscribing to The Western Journal, you can get the truth you’re looking for from a trusted source and help us continue to dig for the truth without concern that censorship will get in the way of our telling you what we find.

You can click here to ensure that you keep getting the fair and accurate news you need — about the 2020 election, political elites, Hollywood hypocrisy, Big Tech censorship, establishment media bias, and all the other subjects that matter to real Americans who live outside the Beltway.

You’ll also send a message directly to the elitists who think they should control what you read, see and hear every day: America is still a free country, and I’m still in charge of choosing the sources of breaking news and insightful commentary that I trust.

You’ll also be sending a message to some people I care very deeply about: The Western Journal’s team of writers, editors, videographers and other dedicated professionals will know that you value their efforts as much as they value you, our reader.