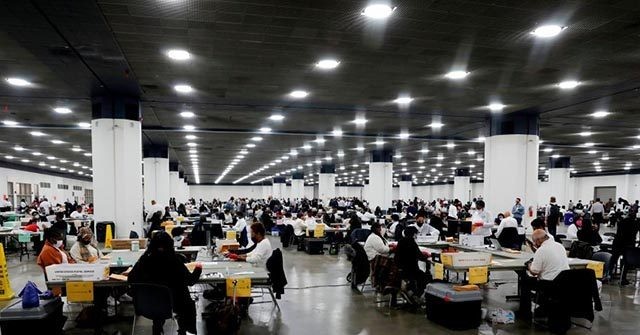 A former deputy attorney general for Michigan made a series of shocking allegations in a sworn affidavit on Sunday, including vote fraud committed by Detroit ballot counters.

Zachary Larsen, who served in both the Bill Schuette (R) and Dana Nessel (D) administrations, was a Republican poll challenger and arrived at the TCF Center in Detroit to observe the absentee ballot counting process last week.

Larsen said “the secrecy of the ballot was not being respected” throughout the process.

“Instead, the second official at the table where I was observing was repeatedly placing her fingers into the secrecy sleeve to separate the envelope and visually peek into the envelopes in a way that would allow her to visually observe the ballot and identify some of the votes cast by the voter,” he said in an affidavit that was part of a suit filed by the Great Lakes Justice Center.

Larsen said other individuals in the ballot counting process would also “peek to observe the ballot,” and he confirmed with other observers that they were seeing similar behaviors.

He said he was concerned that by violating the secrecy, a worker’s personal political preferences may impact whether a ballot would be placed in the “problem ballots” box.

In another allegation, Larsen said he observed workers county ballots “without confirmation that the voter was an eligible voter in the poll book.”

The first ballot scanned came in as a match to an eligible voter. But the next several ballots that were scanned did not match any eligible voter in the poll book.

When the scan came up empty, the first official would type in the name “Pope” that brought up a voter by that last name.

I reviewed the running list of scanned in ballots in the computer system, and it appeared that the voter had already been counted as having voted. Then the first official appeared to assign a number to a different voter as I observed a completely different name that was added to the list of voters at the bottom of a running tab of processed ballots on the right side of the screen.

That same official would then make a handwritten notation on her “supplemental poll book,” which was a hard copy list that she had in front of her at the table.

“I was concerned that this practice of assigning names and numbers indicated that a ballot was being counted for a non-eligible voter who was not in either the poll book or the supplemental poll book,” Larsen said in his sworn affidavit, which comes with a legal punishment for not being truthful.

“From my observation of the computer screen, the voters were certainly not in the official poll book. Moreover, this appeared to be the case for the majority of the voters whose ballots I had personally observed being scanned.”

Larsen said he attempted to move closer to have a better look at what was taking place, and he was ordered to stand back six feet, because of coronavirus concerns, despite wearing a mask.

Larsen’s allegations are part of a lawsuit filed by Wayne County residents Cheryl A. Constatino and Edward P. McCall Jr. against the City of Detroit and Detroit Election Commission, Detroit City Clerk Janice M. Winfrey, and the Wayne County Board of Canvassers.