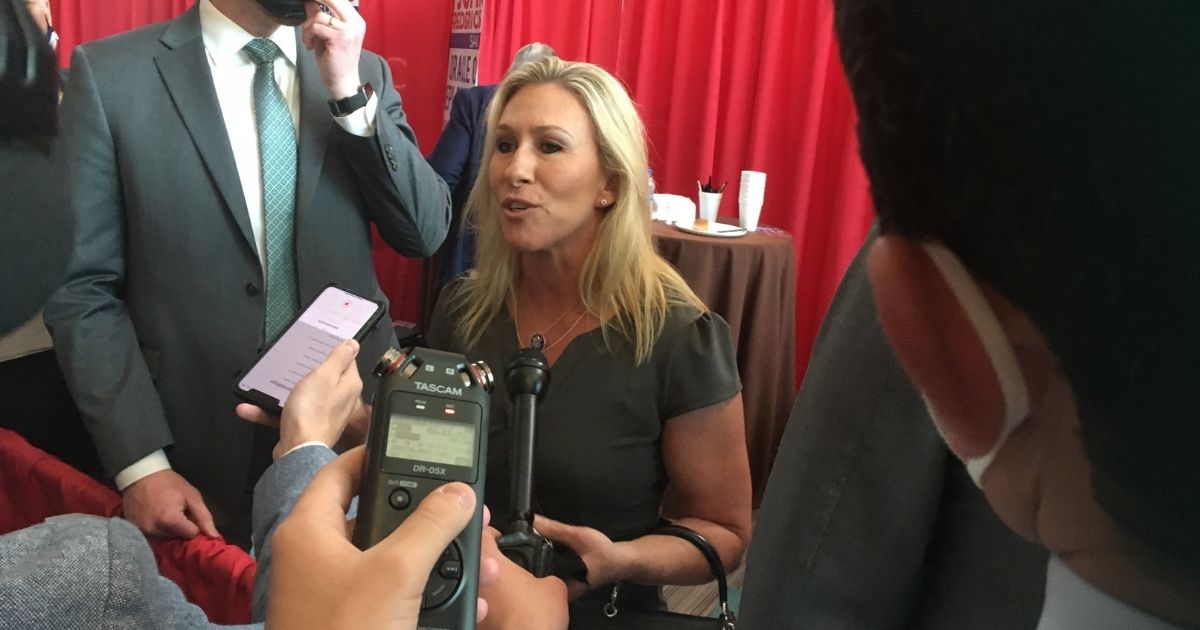 Greene has become a controversial figure due to her past support for a number of debunked, fringe conspiracy theories.

The congresswoman, who was stripped of her committee assignments earlier this month, has said she regrets some of her “words of the past.”

Answering questions from reporters Saturday during a pool spray, Greene singled out House Republican Conference Chair Rep. Liz Cheney of Wyoming and fellow GOP Rep. Adam Kinzinger of Illinois, both of whom have criticized Trump in recent days and voted to impeach him.

“I don’t have bad relationships with people in my party, but I am going to hold people accountable for their words and their actions,” Greene told The Western Journal.

“And when people like Liz Cheney and Adam Kinzinger attack President Trump or attack people like me, what they’re really doing is they’re attacking the people that support us.”

Greene contended that Republicans should focus on “who the real enemy is.”

“And that’s the Democrats who last night passed a $1.9 trillion spending bill with less than 9 percent of it actually goes to COVID relief,” she said.

“And the real enemies that Liz Cheney and Adam Kinzinger need to focus on are the Democrats who passed the so-called equality bill that destroys women’s rights and religious freedoms.

Do you agree with Greene?

“And that’s what they should be focusing on. Instead of petty little attacks at President Trump.”

Greene went on to claim that she intends to hold her fellow Republican members of Congress “accountable.”

“I don’t have to amend any relationships, but I will hold my Republican colleagues accountable and push for them to work for the people that elected them,” she said.

“And those people support President Trump.”

Greene’s comments come a day after former Utah GOP Rep. Jason Chaffetz told The Western Journal that Cheney was too focused on the Trump personality, missing four years of tangible strides for conservative policy-making in Washington.

“What prevails over everything is that the policies that Donald Trump was able to champion, because he turned out to be one of the best conservatives we’ve ever had,” Chaffetz said.

“And if she thinks that the policies of Donald Trump and the Republicans over the last four years were wrong, I’d love to have her articulate that.”

“But I think she’s still caught up in the cult of personality, as opposed to the conservative movement where it’s going.”