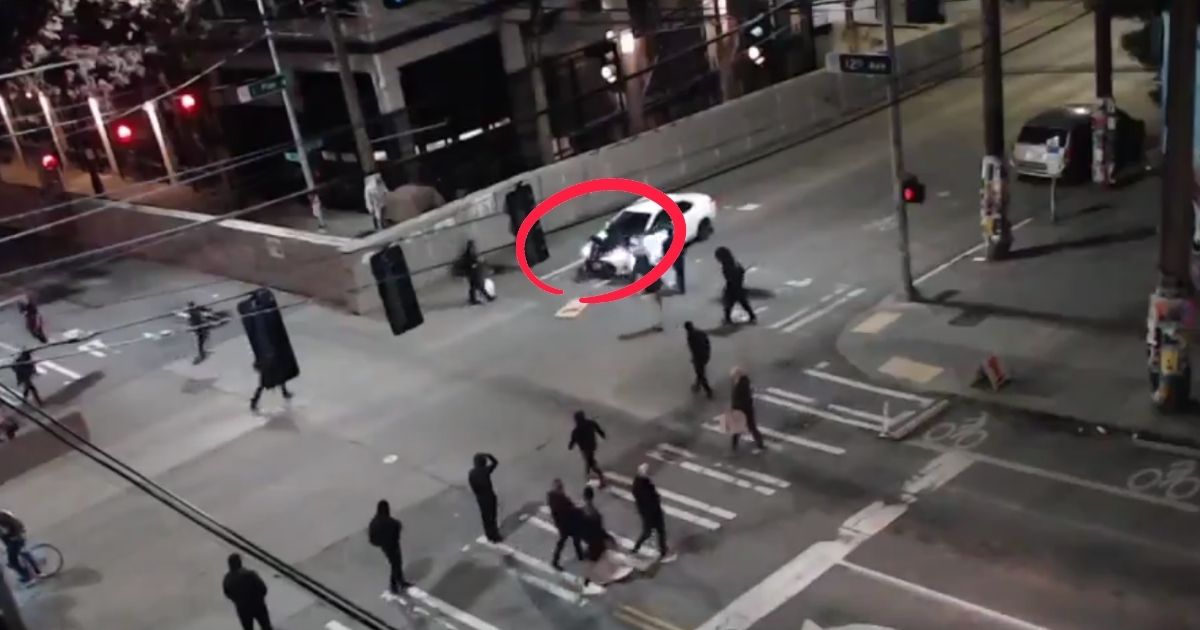 Well, last weekend was May Day, and you know what this means!

Flowers, sunshine, maypoles and anarchy, apparently. At least, this was the case in the Pacific Northwest over the weekend as our anarchist friends of the antifa movement marked International Workers’ Day on Saturday by causing a lot of entirely unnecessary headaches for a bunch of hard-working law enforcement officers and random members of the public.

As they typically do.

One antifa agitator might have more than a headache after getting stuck on the hood of a car as the driver was attempting to casually drive through an intersection on a public city street in his private vehicle at 10 p.m. like the bourgeoise capitalist pig he undoubtedly was.

Local conservative radio host Jason Rantz tweeted out surveillance footage of an intersection outside the East Precinct from Saturday evening which showed the interaction between the driver and the black-clad ghouls.

Media Forced to Retract Reporting on Giuliani Connections to Russia

Just saw a car drive through Antifa protesters outside
the East Precinct in Seattle. One person was on the hood as the driver sped
off. pic.twitter.com/hVk09M3kFN

“Just saw a car drive through Antifa protesters outside the East Precinct in Seattle. One person was on the hood as the driver sped off,” Rantz tweeted.

“Seattle Antifa radicals try to stop traffic outside the East Precinct. A car tries to drive around it, they get in the driver’s way, the driver doesn’t like it, the driver goes through the radicals. I hear the person on the hood was okay,” he wrote.

Seattle Antifa radicals try to stop traffic outside the East Precinct. A car tries to drive around it, they get in the driver’s way, the driver doesn’t like it, the driver goes through the radicals. I hear the person on the hood was okay. https://t.co/PSXqiZaxaP pic.twitter.com/MmrQVFL4OU

This is pretty much exactly how it should go if your vehicle is surrounded by people who are deliberately trying to obstruct traffic. What was he supposed to do? Sit, docile and complacent in his car, until he somehow managed to abolish the Seattle Police Department to appease the disgruntled anarchists?

These people are bullies and thugs and ought to be treated as such.

Earlier in the day, police made just over a dozen arrests following unpermitted protests against what I’m sure was a sundry bag of all things Western and systemic — they probably weren’t very specific.

While KCPQ-TV reported several marches for International Worker’s Day ended peacefully, when the black block hit the streets, all the usual pointless mayhem began. (Or perhaps we should say…May Dayhem? Sorry.)

Throughout the afternoon, SPD tweeted out updates on their various efforts to contain the unruly anarchists the department has grown all too familiar with over the last few years.

Officers have issued a public safety order to this
group, which has continued to place hazards in the roadway. Police are making
an arrest at 7/Olive. #MayDaySea
https://t.co/i22eIY8kB1
pic.twitter.com/G4HwDrJ4h2

Arrests ranged from property damage to blocking public roadways, and police reported incidents of protesters hurling objects at officers — one of the most commonly-employed antifa tactics to provoke a police response (or attempt to thwart independent journalists who expose them, as in the case of Andy Ngo).

Crowd at Broadway and Pine is throwing bottles, rocks,
and paint at officers. Police are now issuing a dispersal order and are making
two arrests.

As Ngo has exhaustively reported for years, the way antifa agitators operate relies heavily on the sort of intimidation tactics that these unwitting Seattle drivers encountered on Saturday evening, whether it be against law enforcement officers or members of the public.

Was the driver right to step on the gas?

In the Pacific Northwest, these violent thugs have been treating public streets like their personal playground, and they’ve used this space to throw dangerous adult temper tantrums over the existence of oppressive social structures like law, order, personal accountability and basic reality.

When the bold driver put his foot on the gas as he was surrounded by violent “protesters” — an act which some states have passed legislation to protect — he even managed to kill two birds with one stone and allow the other vehicles that had been waiting at the intersection to cross.

This speaks volumes to what a difference it makes when one person stands up to a group of bullies — and it’s something we all need to do to stand up against the legitimate terrorist movement that is operating on our nation’s streets, waging war against the most basic tenets of civil society.