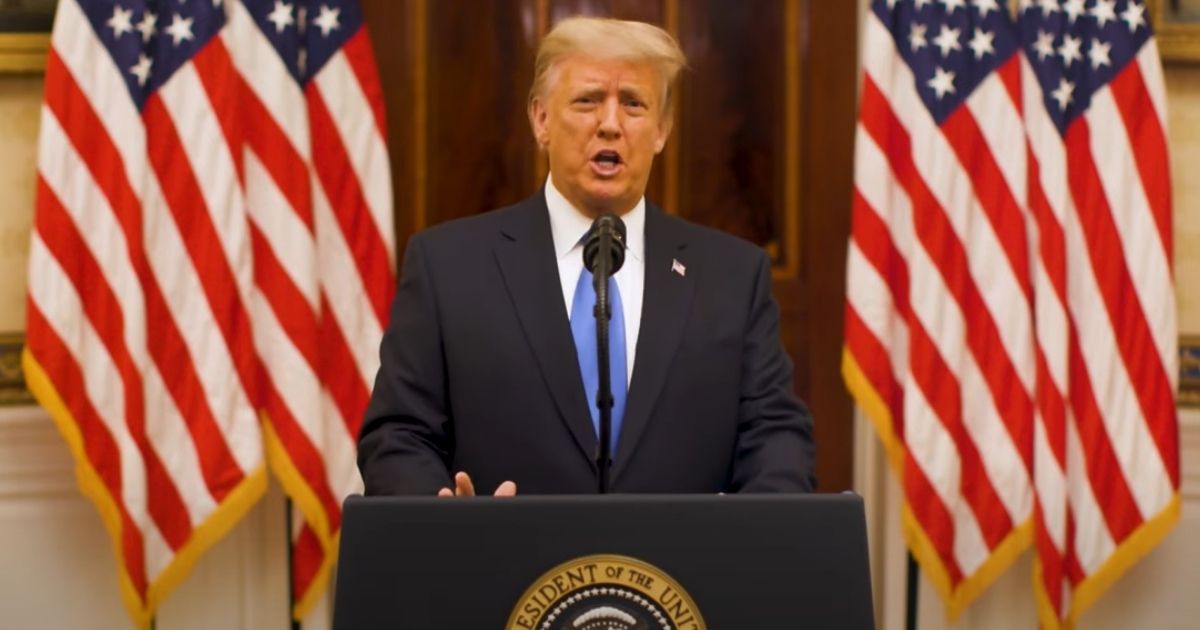 President Donald Trump offered Americans a message of hope for the future on Tuesday in a farewell address just hours before he was slated to hand the keys to the Oval Office over to President-elect Joe Biden.

After three years of unparalleled peace and prosperity, the nation was plunged into chaotic unrest amid Trump’s final year in office — through no fault of the president.

Between the coronavirus pandemic, the nationwide rioting and protests from the left, the no-holds-barred mainstream media assault and an election that will forever have millions of people scratching their heads, Trump’s stamina and optimism as a man and a leader was never challenged.

He worked day and night, and never wavered — and he wasn’t about to begin doing so on Tuesday. In fact, the president said in no uncertain terms that the best is yet to come.

“My fellow Americans: four years ago, we launched a great national effort to rebuild our country, to renew its spirit, and to restore the allegiance of this government to its citizens. In short, we embarked on a mission to make America great again — for all Americans,” he stated.

TRENDING: Dick Morris: Donald Trump Has Been One of Our Great Presidents

“As I conclude my term as the 45th President of the United States, I stand before you truly proud of what we have achieved together. We did what we came here to do — and so much more.”

Trump paid homage to his family, his assistants and to all those who played a role in his administration’s historic success. He also didn’t forget to tip his hat to the American people, and to those who have stood with him through thick and thin.

“Most of all, I want to thank the American people. To serve as your president has been an honor beyond description. Thank you for this extraordinary privilege. And that’s what it is — a great privilege and a great honor,” he said.

Trump, who is a born fighter, challenged the election results until every legal remedy was pursued, and as promised, will make right on his commitment to a peaceful transfer of power on Wednesday, when Biden will be inaugurated before tens of thousands of troops in Washington, D.C.

Trump has attracted blame for inciting an incursion on the Capitol building on Jan. 6. The majority Democratic House of Representatives even impeached him for a second time just last week.

But neither the ugly moments nor the divisive election will define Trump’s presidency. The last four years will be remembered as a period of time in which everyday Americans were made to feel as if their voices mattered in Washington. It’s because those voices were heard by a man who was proudly never celebrated by the Beltway elites.

Despite the recent division within the GOP and among conservatives, Trump created a movement that will succeed him, which the president acknowledged with a sentiment of hope near the end of his farewell speech.

RELATED: JFK Delivered His Famous Inaugural 60 Years Ago: ‘Ask Not What Your Country Can Do for You’

🚨Final Words but Not The Last Words from one of the greatest Presidents in the history of America.

-He never will stop fighting for America pic.twitter.com/Zi4spK6U83

“Now, as I prepare to hand power over to a new administration at noon on Wednesday, I want you to know that the movement we started is only just beginning. There’s never been anything like it. The belief that a nation must serve its citizens will not dwindle but instead only grow stronger by the day.”

“As long as the American people hold in their hearts deep and devoted love of country, then there is nothing that this nation cannot achieve. Our communities will flourish. Our people will be prosperous. Our traditions will be cherished. Our faith will be strong. And our future will be brighter than ever before,” the president added.

“I go from this majestic place with a loyal and joyful heart, an optimistic spirit, and a supreme confidence that for our country and for our children, the best is yet to come,” he said optimistically.

Trump created a blueprint to success for both the GOP and for the American people. Whether the country or the Republican establishment will follow that roadmap has yet to be seen.

But Trump’s fighting spirit lives on in the America First movement, and you get the feeling that we haven’t seen the last from the man who started it all by shocking the world on a Tuesday in November back in 2016.

Despite his ability to galvanize his political opponents against him like no other president, Trump drew the adoration of millions of Americans — many of whom had given up on our country’s system of governance.

When looking at his term in office in its totality, it’s no surprise the president will leave Wednesday offering a message of such hope and optimism.

While there are many fights that lie ahead for conservatives, we must, as the president said, believe that our best days are ahead of us.