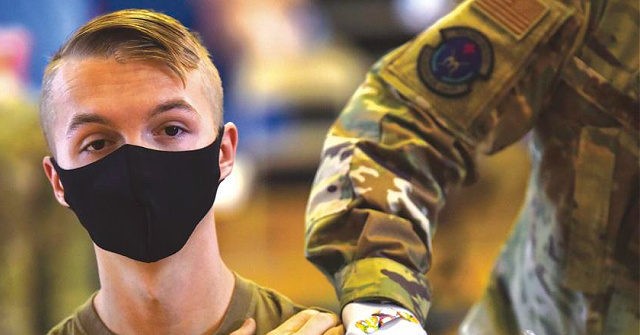 The Pentagon press secretary on Monday said he was unaware of any communications between the White House and the Defense Department about making COVID-19 vaccines mandatory for troops, just days after a top Biden administration official said it was something the Pentagon was “looking at” doing.

National Security Adviser Jake Sullivan on Friday said the Pentagon is considering making the vaccine mandatory for troops in consultation with the “interagency process” — the process by which the National Security Council — which is part of the White House — gathers input from the disparate government agencies that handle national security and tees up national security decisions for the president.

Does the president believe that he has the authority to order all military members to take the coronavirus vaccine — a coronavirus vaccine while it’s still under Emergency Use Authorization? And does he have any political concerns about ordering something that appears to be so unpopular among some members of the uniformed force? [Emphasis added.]

Sullivan, who was speaking at an Aspen Institute webinar, responded:

I’m just going to leave it at that’s something that, uh, the Department of Defense is looking at in consultation with the interagency process, uh, and don’t have anything to add on that subject here today. [Emphasis added.]

However, when queried about Sullivan’s remarks on Monday, Pentagon Press Secretary John Kirby said he was unaware of any communication from the White House on the subject.

“I’m not aware of any communication from the White House with respect to this issue,” Kirby said.

Asked if Defense Secretary Lloyd Austin is considering making the vaccine mandatory, Kirby did not say it was under consideration but said he “has not made any decisions to change it from being a voluntary vaccine.”

He also emphasized that, currently, the vaccine is still voluntary and encouraged troops and their families to get it.

“We believe they’re safe and effective and all the information is publicly available about the efficacy of these vaccines. The Secretary continues to want to encourage people to elect to take the vaccine,” he said.

Asked again about the disparity with Sullivan’s remarks on Friday, Kirby said he would be happy to look into the issue further.

Questions about making the vaccine mandatory for troops are arising amid reports that the rate of those taking the vaccine is slowing and reaching herd immunity may be difficult given the numbers of people who are declining it.

Among members of the military, fewer than a quarter of the entire military force, active and reserve, have been fully vaccinated as of last week.

President Joe Biden indicated in an NBC News interview released hours before Sullivan’s remarks on Friday that he had not ruled out requiring troops to get the vaccine after FDA approval.

Biden said he would “leave it to the military,” but added, “I think it’s going to be a tough call as to whether or not they should be required to have to get it in the military because you’re [in] such close proximity with other military personnel — whether you’re in a quarters where you’re all sleeping or whether you’re out in maneuvers.”

Military commanders at some bases are trying to encourage troops to get the vaccine by allowing those who are fully vaccinated to eat inside dining facilities and use cardio equipment at some on-base gyms, as Breitbart News reported in March.