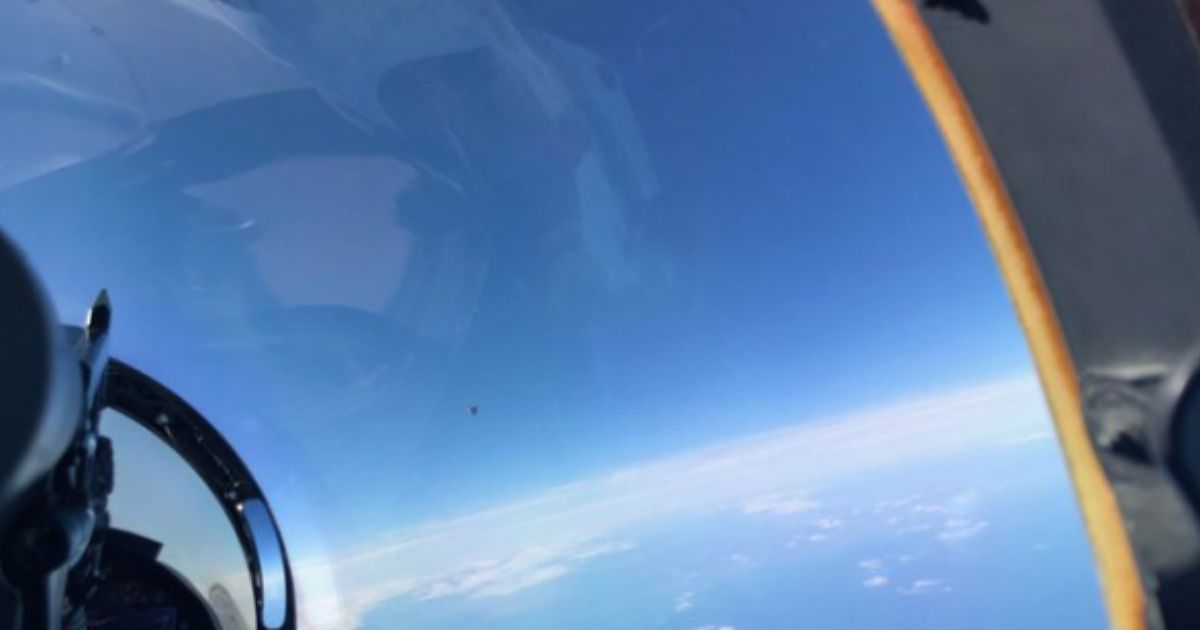 The Department of Defense has refused to responded directly to an inquiry about a leaked picture of a purported mysterious silver cube-like objection hovering high above the ocean reportedly taken from a U.S. Navy fighter jet.

The Debrief reported early this month that the photo, taken by the jet’s pilot on his personal cellphone, came from a 2018 intelligence report about Unidentified Aerial Phenomena, called UAPs by the department.

“According to three U.S. officials who had seen it, the photo showed an unidentified silver ‘cube-shaped’ object. The report is said to have indicated the object was ‘hovering’ or completely motionless when military pilots encountered it,” the news outlet recounted.

“All three officials agreed that based on the photo, the object appeared to be at an altitude of roughly 30,000 to 35,000 feet and approximately 1,000 feet from the fighter jet.”

The photo was taken from the cockpit of an F/A-18 fighter jet.

BREAKING: @Debriefmedia has learned of the leak of an unclassified photo, said to have been widely distributed in the Intelligence Community, which purportedly shows what the DoD has characterized as “Unidentified Aerial Phenomena.”https://t.co/z9iBnrtRAb

“In decades with the [Intelligence Community], I’ve never seen anything like this,” an intelligence official told The Debrief.

The UAP report expressly stated the sighting in question could represent “alien” or “non-human” technology.

Do you believe in extraterrestrial life?

Another photograph said to be in the report shows an unidentifiable triangular aircraft.

It also was snapped by an F/A-18 pilot, who was flying off the East Coast of the United States.

“Two officials that received the report said the photo was taken after the triangular craft emerged from the ocean and began to ascend straight upwards at a 90-degree angle,” according to The Debrief.

The document about UAPs reportedly “went viral” among the intelligence community, according to an intelligence official who read it.

Mystery Wire reached out to the DOD for reaction to the publication of the photo.

“I have nothing for you on that. I am not going to comment on whether something was or was not in a classified intelligence report,” said Sue Gough, of the DOD’s public affairs office.

“In general, regarding UAPs, to maintain operations security and to avoid disclosing information that may be useful to potential adversaries, DOD does not discuss publicly the details of reports, observations or examinations of reported incursions into our training ranges or designated airspace, including those incursions initially designated as UAP.”

In August, the DOD established an Unidentified Aerial Phenomena Task Force (UAPTF), which is being overseen by the Department of the Navy.

“The Department of Defense established the UAPTF to improve its understanding of, and gain insight into, the nature and origins of UAPs,” a news release said. “The mission of the task force is to detect, analyze and catalog UAPs that could potentially pose a threat to U.S. national security.”

No, Palm Beach International Airport will not be re-named after Donald Trump

No, Palm Beach International Airport will not be re-named after Donald...

House Submits Impeachment Article to Senate; Trial to Begin in 2...