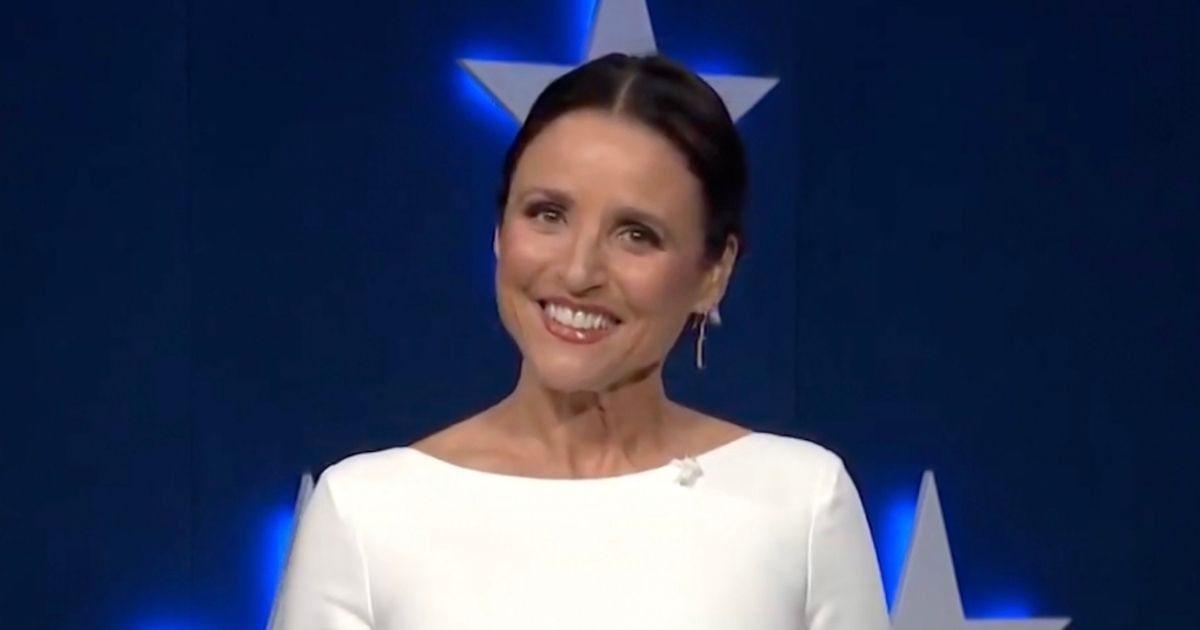 On Aug. 21, Julia Louis-Dreyfus was one of the featured speakers at the Democratic National Convention. Taken on its own, the appearance itself was unremarkable — and, by the way, not terribly funny, if the transcript is anything to go by. (Without it, nothing managed to jog my memory, anyhow.)

She told Andrew Yang to “please give my regards to the gang,” a reference to his “Yang Gang” of supporters, according to the transcript. She talked about how Joe Biden, known for his frequent rides aboard Amtrak, called her to compliment her on a feature interview in the rail carrier’s free onboard magazine.

“And that is just one of the many reasons that I wanted to be here tonight for Joe, and to remind you that Joe Biden not only knows how to read, but also he reads everything,” Louis-Dreyfus quipped.

See, it’s funny because she called President Trump illiterate. Anyhow, this is the kind of edgy star power you could expect from the woman you may have seen in “Veep,” but probably last saw during a 3 a.m. rerun of “Seinfeld” some night.

The appearance was short and unmemorable — which is why the fact it turned up in Vanity Fair six months later came a surprise. The problem, it turns out, is that Louis-Dreyfus’ routine was de-fanged a bit — if only because the teeth she had wanted to bare could have ended up biting Joe Biden, instead.

The anecdote — part of an excerpt from Jonathan Allen and Amie Parnes’ forthcoming tome “Lucky: How Joe Biden Barely Won the Presidency” — describes a scramble to adapt Louis-Dreyfus’ material to fit the Biden team’s prerogatives on the fourth night of the convention.

According to Allen and Parnes. “Louis-Dreyfus thought she could land some body blows on Donald Trump, with a big smile on her face, because, as a comedian and someone outside the political realm, there were things she could say that wouldn’t wear as well on a politician.”

Whether or not the unexpurgated material would have done that will likely never be known, but it turns out the routine that was originally written for her was pulled at the request of the Democratic National Committee because it japed at President Trump by intimating he might be suffering from significant cognitive decline.

Not that the DNC organizers were particularly worried about a poor-taste joke against a sitting president, mind you. They were more concerned about reminding the American public their vessel mightn’t be particularly seaworthy, either.

The excerpt published in Vanity Fair on Friday describes a showdown between convention chief program executive Stephanie Cutter and David Mandel, Louis-Dreyfus’ chief joke-writer and the show-runner on “Veep.”

“The political speechwriters were a little annoyed that [Louis-Dreyfus] insisted on having her ‘Veep’ writers draft her script,” Allen and Parnes reported. “Now Cutter had finally read the jokes, and she was not amused. One of them, in particular, was totally out of bounds.

“Louis-Dreyfus planned to say that Joe Biden understood hard work and struggle, while ‘the only time Donald Trump has struggled is walking down a ramp and trying to drink a glass of water.’ Her writers had been told it didn’t fit in the spot they wanted to use it. So they had slotted it in at another point in the script. Mandel was asked to call Cutter.”

Cutter wanted to know why they’d reinserted the joke back in the routine.

“‘You told us it didn’t work in the other spot,’ Mandel said,” according to their account. Cutter told him “you can’t do it anywhere.”

RELATED: Watch: Biden Refuses to Take Questions After Speech, Has to Be Reminded to Mask Up Before Leaving

After saying the DNC should have told his team that, Mandel asked, “What’s your problem with the joke?”

It’s not often I agree with a “Veep” show-runner who thought it was uproarious to note “the only time Donald Trump has struggled is walking down a ramp and trying to drink a glass of water.” However, he had a point:

“’You not opening the dementia thing is not going to prevent the Republicans from doing it till the end of time,’ Mandel tried to explain,” Allen and Parnes wrote. “If anything, preempting that GOP line of attack before the Republican convention the following week would be helpful to Biden, he thought.”

Cutter’s solution was to suggest a substitute: “Donald Trump thinks ‘self-made’ means inheriting only half a billion dollars from your dad.”

“Cutter didn’t care if it was funny. It was her job to make sure that nothing distracted from the blandness of the convention,” Allen and Parnes wrote.

“In that way Biden’s close to the convention resembled his broader campaign goal: Don’t f— up. One half of his low bar for success had been set by Trump, who told the public that Biden was an enabler of socialism and crime who couldn’t speak English in complete sentences. The other half came from an anti-Trump coalition that would forgive almost any Biden misstep.”

One can safely include the mainstream media in that “anti-Trump coalition,” given reporters and editors stopped caring about Biden’s mental fitness for the office after it became clear he was going to be the nominee.

Allen and Parnes’ book isn’t set to be released until Tuesday, although all indications are that, while it paints certain aspects of Biden’s 2020 campaign in a negative light, it doesn’t appear to be a hatchet job. The thing is that, if the mainstream media reporters covering the election had done enough rooting around on their own accord, they would have found enough hatchet-job material.

In one widely reported scoop from the book, a top Biden aide said told “an associate” that “Covid is the best thing that ever happened to [Biden],” and that this attitude was something “campaign officials believed but would never say in public.”

The authors also reported that, when it came to choosing favorites among the Democratic field, former President Obama “seemed to be enamored with a former Texas congressman, Beto O’Rourke.” When Beto flamed out, he later told a meeting of black donors he had “embraced the prospect of [an Elizabeth] Warren presidency.”

Perhaps Obama knew what everyone could see (and what Biden’s handlers didn’t want to remind us all of): The Democratic Party’s presidential nominee wasn’t all there and the merest mention of it could cause some serious problems.

Thankfully, they had a pliant media willing to cover up for them all the way up to the general election. Biden didn’t exactly keep his end of the bargain — “Don’t f— up” — but given no one reported on it, it may as well not have happened.

Police unions blast school for anti-cop “book of the month” –...