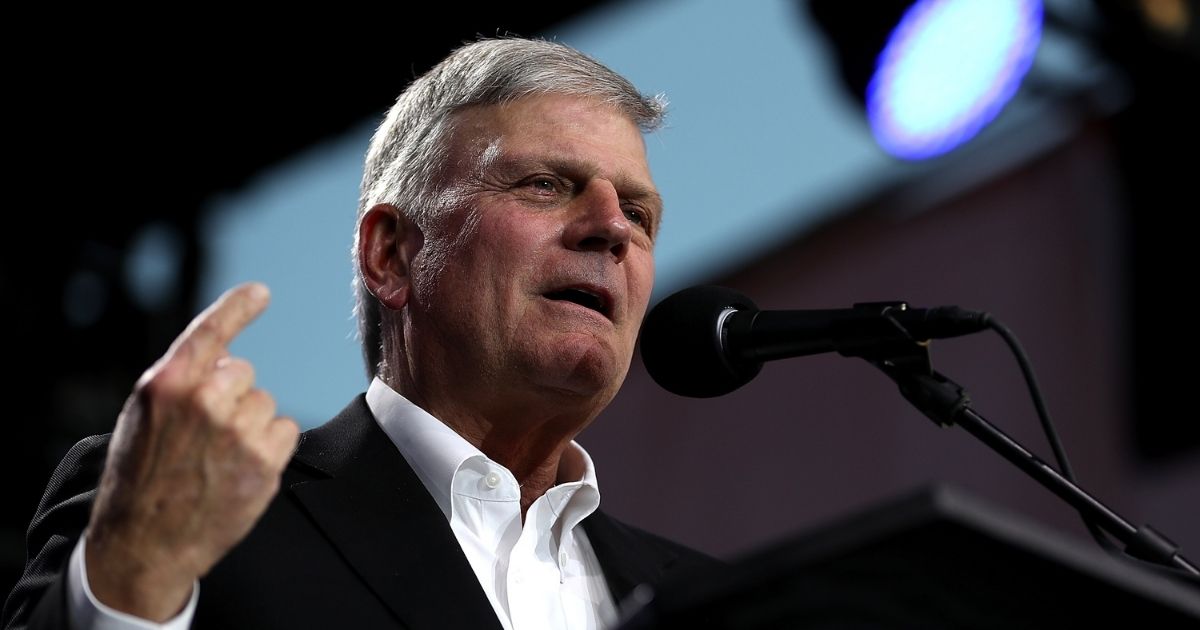 Rev. Franklin Graham contended that the “soul” of America is at stake in Tuesday’s Georgia U.S. Senate runoffs.

“Christians who believe the Bible and live in Georgia — the soul of our nation is at stake. I ask you to rally God’s army to PRAY and VOTE in this run-off for the Senate,” Graham wrote in a Facebook post last week.

“There will not be another chance to get this right,” he added. “The Senate is the last line of defense to block the radical, wicked agenda that is trying to take control of our nation.”

The preacher argued should Democratic candidates Raphael Warnock and Jon Ossoff prevail against Republican Sens. Kelly Loeffler and David Perdue, respectively, it would clear the way for anti-Christian legislation to move forward.

The GOP currently holds a 52 to 48 majority in the Senate, with the fate of both Republican-controlled seats in Georgia up in the air pending Tuesday’s results.

“These two seats will determine whether liberal socialist-leaning progressives OR conservative lawmakers have a majority,” Graham wrote. “The policies supported by those on the left promise to be openly hostile to those who hold Christian beliefs.

Christians who believe the Bible and live in Georgia—the soul of our nation is at stake. I ask you to rally God’s army…

“Liberal, so called progressives, immediately want to pass The Equality Act which is anything but equal. It is an attempt to rid our country of religious freedom protections. Progressives could pass this easily and quickly with control of the Senate,” he said.

Does the left supports policies that are hostile to Christian beliefs?

“It will vastly alter the America that we leave for our children and grandchildren.”

CBN News reported that secular Democrats want to change the Religious Freedom Restoration Act, signed into law by then-President Bill Clinton in 1993, after a 97-3 passage in the Senate and after the House of Representatives approved it by a voice vote.

The legislation was introduced by then-Democratic Rep. Chuck Schumer of New York.

Democratic Sen. Kamala Harris of California, who would be in a position to cast a tie-breaking vote in the Senate in a Biden administration as vice president should Warnock and Ossoff win and Joe Biden become president, introduced the Do No Harm Act in 2019, which would significantly alter the RFRA.

“That act would gut the Religious Freedom Restoration Act. It would make it inapplicable to cases that involve sexual orientation and gender identity as well as abortion,” Emilie Kao, director of the DeVos Center for Religion and Civil Society at The Heritage Foundation, told CBN News.

“Unfortunately we see that senators are increasingly treating religious beliefs with great suspicion and even hostility,” Kao added.

RELATED: Franklin Graham Goes on Live TV To Deliver Powerful Christmas Message for Those Who Are Discouraged

On Sunday, Graham highlighted in series of tweets that the Democrat-controlled House was set to adopt rule changes that strike the use of gender-specific terms.

“[House Speaker Nancy] Pelosi & Rep. [Jim] McGovern announced a set of changes to the House rules to enshrine what they call gender-inclusive language. Can you believe that they actually propose to strike the use of words including father, mother, son, aunt, uncle, & wife?” the Christian leader asked.

These proposed changes will be voted on soon after the House enters the new session. God “created them male & female” (Genesis 1:27). It’s just a fact. If those claiming the name progressive are allowed to have their way, we won’t even recognize this nation in a very short time.

“God ‘created them male & female’ (Genesis 1:27). It’s just a fact,” Graham added. “If those claiming the name progressive are allowed to have their way, we won’t even recognize this nation in a very short time.”