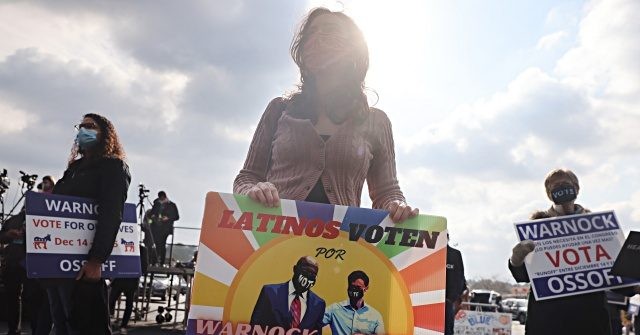 Democrats in Georgia are relying on the results of decades of mass immigration to the United States to help flip the state blue for Democrat Senate candidates Jon Ossoff and Raphael Warnock in the upcoming runoff election.

Democrat activists, according to Politico, are closely targeting Georgia’s most booming demographic: Asian Americans. The group has increased their share of the state’s population, mostly due to the annual admission of about 1.2 million legal immigrants a year, by nearly 105 percent since the year 2000 and more than 290 percent since 1990, according to Census Bureau data.

Some 30,000 Asian American voters in Georgia voted for the first time in their lives last month, a notable figure, considering that Biden won by little more than 11,000 votes in the state. Nationally, Asian Americans voted for Biden by roughly a 2 to 1 margin, according to exit polls. And turnout among Asian Americans exceeded 2016 totals in every battleground state except Wisconsin and Pennsylvania, according to Tom Bonier, CEO of the Democratic firm TargetSmart. [Emphasis added]

More than 70,000 Georgia Asians who voted in this year’s presidential election didn’t vote in 2016, according to TargetSmart data. And Asian American advocacy organizations who support Democrats are trying to make it happen again in the Jan 5, Senate runoffs in the state. [Emphasis added]

The New York Times and a Washington Post columnist have recently acknowledged that Democrats are leaning heavily on the results of mass immigration to Georgia to flip the state blue as they have done in Virginia and Orange County, California.

“The emergence in Georgia of Asian-American voters is a potential bright spot for a Democratic Party counting on demographic changes to bring political wins across the country,” the Times reported last month.

Analysis by The Atlantic‘s Ronald Brownstein has previously revealed that congressional districts with a foreign-born population above the national average, a little more than 14 percent, have a 90 percent chance of being won by Democrats over Republicans.

The number of foreign-born voters and their voting-age children in Georgia has boomed by 337 percent between 2000 to 2020. Meanwhile, the native-born voting-age population in Georgia has increased by just 22 percent over that same period.

The drastic “demographics changes,” as described by multiple establishment media outlets, has made the electoral map increasingly easier for Democrats.

The Washington Post, New York Times, the Atlantic, Axios, the Los Angeles Times, and the Wall Street Journal have all admitted that rapid demographic changes because of immigration are tilting the nation toward a permanent Democrat dominance.

“The single biggest threat to Republicans’ long-term viability is demographics,” Axios acknowledged last year. “The numbers simply do not lie … there’s not a single demographic megatrend that favors Republicans.”