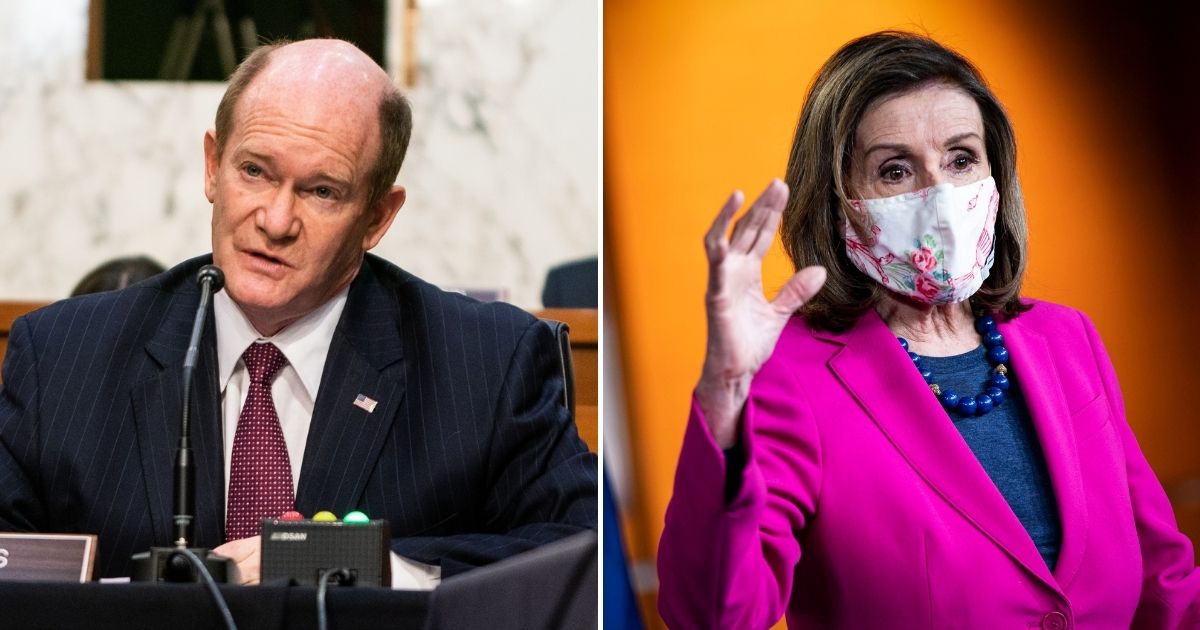 An investigation into the Jan. 6 Capitol incursion with a partisan tilt cannot provide the nation with the closure it needs, according to a Democratic senator who is pushing back against House Speaker Nancy Pelosi’s call for a Democrat-dominated commission.

“I think it’s important that we have a balanced January 6th commission,” Democratic Sen. Chris Coons of Delaware said, according to CNN.

Pelosi has called for “an outside, independent 9/11-type Commission” in her own words, The Hill reported.

The commission would “investigate and report on the facts and causes relating to the January 6, 2021 domestic terrorist attack upon the United States Capitol Complex,” she said.

It would additionally review anything else “relating to the interference with the peaceful transfer of power, including facts and causes relating to the preparedness and response of the United States Capitol Police and other Federal, State, and local law enforcement in the National Capitol Region,” according to Pelosi.

Pelosi wants two members from each party for each branch of Congress, meaning four Democratic appointees and four Republican ones would be on the panel. But the balanced approach ends there.

Coons told CNN that commission members should be “folks who are not politically motivated in how they get to the bottom of this” — not those currently in, or holding aspirations for, public office.

The Democratic senator said the commission should investigate “all the events that led up to the riot at the Capitol and this baseless theory that [former President Donald] Trump won the election.”

Should Pelosi move on from the events of Jan. 6?

“This is important. It’s one of the key ways of how we come together as a country.”

“Joe Biden ran on unifying our nation and to unify our nation, we have to lay bare the ways in which we just haven’t believed each other. Joe Biden was legitimately elected president of the United States, and we need to help the American people accept that fact,” the senator said.

Coons added if the commission is to rise above partisanship, it must command respect from all parts of the political spectrum.

“The leaders of the 9/11 commission have said part of why it was so successful was that it was even, it was balanced, and it was led by folks who were well-respected and well-regarded, who had a reputation for working across the aisle,” he said.

Republican Rep. Rodney Davis of Illinois has called for a commission of 10 members equally split between Republican and Democratic appointees, according to CBS News.

“The Speaker of the Houses proposes even more investigation through a new commission. She cites the precedent of the 9/11 Commission. But her draft bill fails to track with that precedent in key ways,” McConnell said in a Senate floor speech on Wednesday.

“This time, Speaker Pelosi started by proposing a commission that would be partisan by design. Seven appointments for Democrats, just four for Republicans.”

McConnell indicated he would support a panel that looked at the broad spectrum of political violence.

“If Congress is going to attempt some broader analysis of toxic political violence across this country … then in that case, we cannot have artificial cherry-picking of which terrible behavior does and does not deserve scrutiny,” McConnell said.

“We could do something narrow that looks at the Capitol, or we could potentially do something broader to analyze the full scope of the political violence problem in this country.”