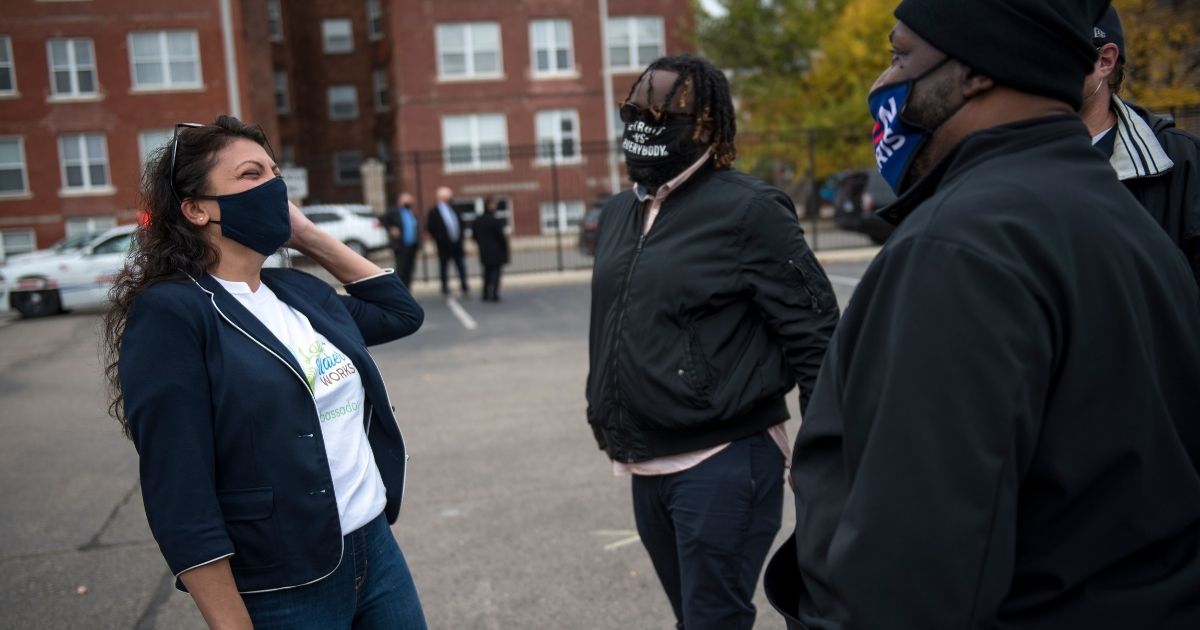 Democratic Rep. Rashida Tlaib of Michigan and fellow progressives are calling for Democrat Joe Biden to worry less about making friends with Republicans and more about kowtowing to them.

Biden leads President Donald Trump in the 2020 election, sparking some media organizations to say the former vice president has won the race even though it hasn’t been certified. Biden already has issued calls for unity amid talk of transitions and what Democrats will do in 2021 and beyond.

Tlaib, a member of Capitol Hill’s “squad” of four far-left Democats, said the needs of progressives should outweigh any unity talk.

“We’re not going to be successful if we’re silencing districts like mine,” she said, according to Politico. “Me not being able to speak on behalf of many of my neighbors right now, many of which are Black neighbors, means me being silenced. I can’t be silent.

“We are not interested in unity that asks people to sacrifice their freedom and their rights any longer.”

Tlaib said that if “we truly want to unify our country, we have to really respect every single voice.”

“We say that so willingly when we talk about Trump supporters, but we don’t say that willingly for my Black and brown neighbors and from LGBTQ neighbors or marginalized people,” she said.

“If [voters] can walk past blighted homes and school closures and pollution to vote for Biden-Harris, when they feel like they don’t have anything else, they deserve to be heard. I can’t believe that people are asking them to be quiet.”

Tlaib’s comments come as progressive groups have fired off a memo saying that moderates, not progressives, are to blame for the party’s sad showing in the congressional elections.

Are these Democrats delusional?

The memo said it presents truths the “Democratic Party leadership must face and lessons to be learned if they truly want a united party that can overcome the divide-and-conquer tactics of FOX News and the GOP to win elections.”

“Republicans have harnessed strategic racism to divide the electorate,” said the memo, labeled as being from New Deal Strategies, Justice Democrats, the Sunrise Movement, and Data for Progress.

“For Democrats to succeed, [House Speaker Nancy] Pelosi and the rest of Congressional Democratic leadership have to be clear-eyed about their failures. Even as we celebrate President-elect Biden’s historic defeat of Trump, they must be held responsible for these disappointing down ballot results,” the memo said, adding: “We need a new generation of leadership grounded in a multiracial, working class experience and background.”

The memo points fingers as it urges fingers not to be pointed at progressives.

“As we speak, Congressional Democrats are debating why they underperformed and some have been quick to blame progressives. There is no denying Republicans levied salient rhetorical attacks against Democrats, but these will continue to happen as they do every cycle,” the memo said. “We cannot let Republican narratives drive our party away from Democrats’ core base of support: young people, Black, Brown, working class, and social movements who are the present and future of the party.”

The memo implied the Democratic Party should turn its back on white suburban voters.

“Despite an obvious preference by Democratic leadership to focus on the suburbs and former Republican voters rather than working-class communities of color, progressives like Stacey Abrams, Rep. [Ilhan] Omar and Rep. Rashida Tlaib are showing us – through turnout results in their states and cities – where Democrats must invest to build the party,” the memo said.

Instead, it said the party should fully endorse the Black Lives Matter movement, which it said is responsible for Biden’s success at the ballot box.

“If Democrats cower from the national conversation sparked by the Black Lives Matter movement, then the only ones left owning this space will be the GOP,” the memo said. “The Democratic Party has long taken the base of its party, Black voters, for granted. We need a Democratic Party dedicated to economic and racial justice.”

One progressive leader said progressives fear Biden will work with the GOP.

“That approach to governance could really threaten party unity and the 2022 midterms, because Mitch McConnell’s sole goal will be to make Joe Biden swallow as many toxic poison pills as possible that make it harder to campaign in the midterms,” Waleed Shahid, a spokesperson for Justice Democrats, said, according to Politico.

If the GOP keeps control of the Senate, he said, the major question is “how much hardball will Democrats play.”