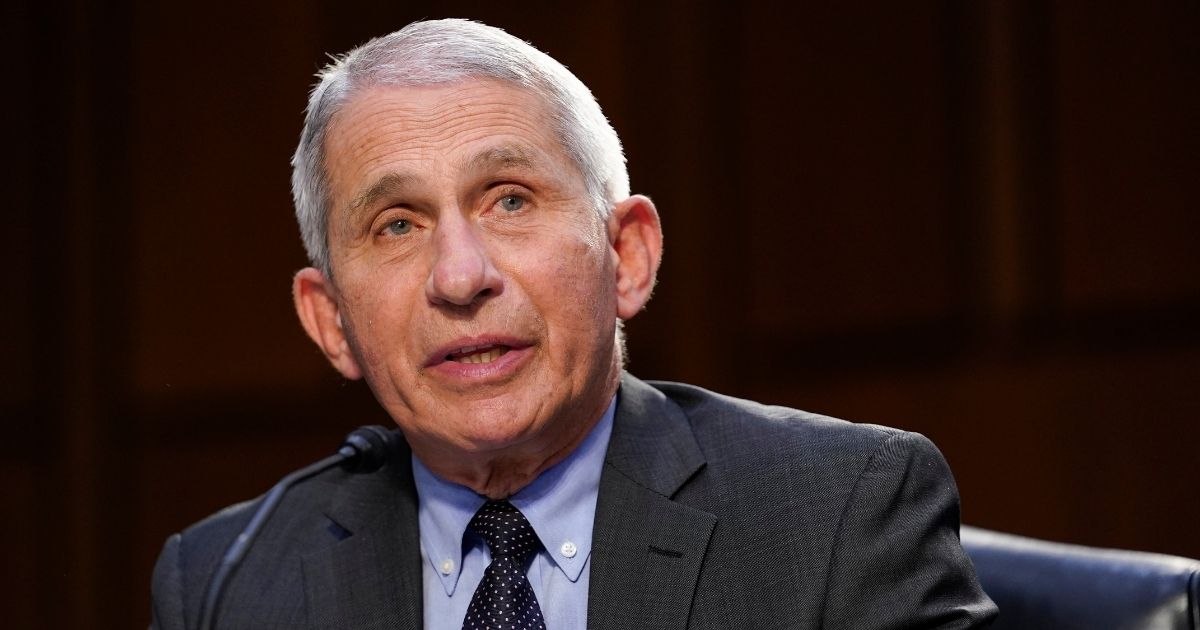 There’s no greater secular liberal cult than the one which has grown up around the supposed infallibility of Dr. Anthony Fauci, head of the National Institute of Allergy and Infectious Diseases and our nation’s go-to guy for all things COVID.

He’s beloved by the people on your Facebook friends list who are fond of talking about capital-S-exclamation-pointed-added “Science!”– a fact which takes on a grim irony when you factor in how wrong he’s been wrong or misleading about the actual science of COVID. (Remember when Fauci told us masks were ineffective? The “Science!” people don’t.)

He’s not just adored by celebrities, he is a celebrity. What other COVID-adjacent public figure would appear on our televisions around Christmastime to assure the nation’s children he’d gone up to the North Pole personally to vaccinate Santa Claus?

Which other unelected official in the federal government do you see being interviewed by former NFL player Marshawn Lynch, as Fauci was last week? (Forbes asserted Lynch “ask[ed] better questions than most journalists,” which probably wasn’t wrong and tells you where the bar is these days.)

Perhaps most importantly, he’s venerated by Democratic politicians, who view his missives as beyond question. That’s not necessarily hyperbole, given GOP Rep. Jim Jordan of Ohio was actively stopped from questioning Fauci about lockdowns several times during Fauci’s testimony before the House last week.

The clip you probably heard was when Democratic Rep. Maxine Waters of California told Jordan to “respect the chair and shut your mouth” after Jordan asked when Americans could “get their freedoms back.” This led to plenty of headlines — but the most telling exchange between Fauci and Jordan was arguably elsewhere.

In March, when Texas announced an end to its lockdown — including all mask mandates — Fauci called the decision “inexplicable” and said it could lead to a “surge” in cases. Michigan, meanwhile, has some of the strictest lockdown provisions in the nation.

So why, Jordan asked, was Michigan in so much worse shape than Texas? Or, for that matter, why are some of the “top lockdown states” doing worse than Texas?

He didn’t get an answer, thanks to committee chair Democratic Rep. James Clyburn of South Carolina.

The exchange came after Fauci noted he was guessing about when he thought the country could open up because he didn’t know how many people would take the vaccine.

“You gave us your guess on Texas. You said when Texas ended their lockdown, ended their mandate, that this was ‘inexplicable and would lead to a surge in cases,'” Jordan said.

“Texas is near the bottom of the 50 states [in COVID-19 cases] but all the states at the top are lockdown states.”

“That guess didn’t seem to be too good.”

The seven-day case rate per 100,000, at the time, had Michigan at the top — with  Rhode Island, New Jersey, New York City, Minnesota, Pennsylvania, Delaware and New York trailing behind.

RELATED: Ex-WH Chief of Staff: Trump Was More Focused at 1 AM Than Biden Is at 1 PM

Wisconsin, Michigan’s neighbor, had fewer cases per 100,000 than Michigan; Wisconsin’s Supreme Court had struck down the governor’s COVID-19 restrictions last May. Texas, meanwhile, was toward the bottom of the chart.

Those numbers remain mostly unchanged a week later; according to New York Times data as of Thursday morning, Michigan is still the worst in the nation with 64 cases per 100,000. New Jersey is second with 38, Delaware third with 36, Pennsylvania and Minnesota fourth and fifth with 34. Maine, Rhode Island, Puerto Rico and New York rounded out the top nine.

“What explains why Texas is so darn low compared to the rest of the states?” Jordan asked.

“There’s a difference between lockdown and the people obeying the lockdown,” Fauci responded. “You could have a situation where they say we’re going to lock down, and yet you have people doing exactly what they shouldn’t do.”

It’s almost as if he’s saying lockdowns and mask mandates have no impact on individual behavior. That can’t be right — remember, Texas made a move that was “inexplicable and would lead to a surge in cases.”

Jordan wanted Fauci on record about this: “Is that what’s happening in the top eight states in the country?” he asked. “They’re just not following what’s been told, they’re not listening to Dr. Fauci?”

After a bit of back and forth, Clyburn gaveled the line of questioning:

“I think the gentleman answered you quite clearly,” Clyburn said. “There is a big difference in being a lockdown state by order and being a state that obeys orders. That answers the question, in my opinion.”

I’m glad that’s Clyburn’s opinion, but he’s wrong; the context of Jordan’s question was clear and Fauci didn’t answer it.

Most of the states at the top of the COVID-19 case count per capita chart are states that have had consistently stringent lockdowns in place since the beginning of last year. If lockdowns and mask mandates are negatively correlated with success in managing case counts, there needs to be an answer as to why.

That doesn’t necessarily mean lockdowns are the reason behind these numbers — but if the correlation isn’t causality, the nation’s top coronavirus expert should be able to provide a substantive answer to why, at the very least, that statistical anomaly exists.

Fauci’s response — that there was “a difference between lockdown and the people obeying the lockdown” — was inchoate at best and damning at worst. While Jordan’s question was leading, it needed to be answered.

The top eight states in the seven-day rolling COVID case average are still substantively what they were when Fauci and Jordan had this exchange. Of the 16 senators distributed among those states, only two are Republicans.

Does the nation’s top infectious disease expert, beloved by the “Science!” left, think the reason those states’ numbers are so high is that their residents, by and large, aren’t listening to what he’s saying — but Texas is?

This doesn’t get the kind of headlines Maxine Waters telling Jim Jordan to “shut your mouth” does, but it’s a lot more illuminating. Not only did Fauci seem to contradict the very foundations of what he’s spent the last year defending, but Clyburn’s willingness to save Fauci proved how the secular faith works.

Fauci cannot be seriously questioned; to go too far risks blasphemy. Meanwhile, look at the questioning from Waters. Well, not really questioning: According to USA Today, she told Fauci “I love you” and that “you literally saved millions of folks who would only listen to your advice based on what was happening with the Trump administration.”

Get too tough with him, though? Ask him a difficult question? “Shut your mouth” or get shut down.