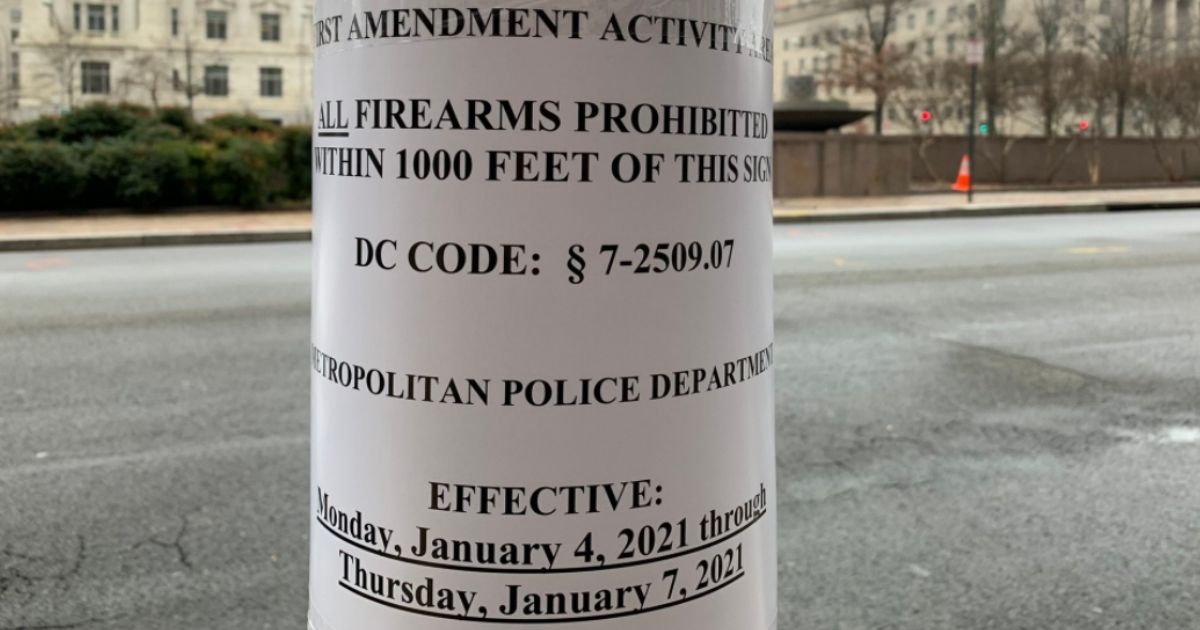 As pro-Trump protesters plan to descend on Washington, D.C., this week to support President Donald Trump and voice their beliefs about the integrity of the 2020 presidential election, police in the nation’s capital are warning attendees against bringing firearms to the rallies.

Notices prohibiting guns from Jan. 4 to Jan. 7 have already been posted around the city in preparation for the protests, according to WTTG-TV.

Starting tomorrow all firearms will be prohibited in #DC ahead of #January6 @fox5dc pic.twitter.com/HLKY48WM3P

“Members of the public and anyone attending the events are reminded that District law prohibits anyone from carrying a firearm within 1,000 feet of any First Amendment activity,” read a statement from D.C. Mayor Muriel Bowser.

“Under federal law, it is illegal to possess firearms on the US Capitol grounds and on National Park Service areas, such as Freedom Plaza, the Ellipse, and the National Mall.”

Bowser said that area residents should not engage with the demonstrators.

“I am asking Washingtonians and those who live in the region to stay out of the downtown area on Tuesday and Wednesday and not to engage with demonstrators who come to our city seeking confrontation, and we will do what we must to ensure all who attend remain peaceful,” the mayor said.

The United States Capitol Police said they have “comprehensive security plans in place” to keep the city safe and to monitor new threats.

“While we do not discuss the means, methods, or specific resources used to carry out our protective responsibilities, the United States Capitol Police has comprehensive security plans in place and we continuously monitor and assess new and emerging threats, with the overall goal of keeping those within the Capitol Complex safe and secure,” police said in a statement to WUSA-TV.

On Sunday, Trump indicated on Twitter that he will be present for at least one of the various rallies sponsored by groups that support him.

I will be there. Historic day! https://t.co/k6LStsWpfy

At least four separate protests are planned for this week, according to The Washington Post. Among the groups protesting is the Eighty Percent Coalition, which will kick things off with a Tuesday night march.

“We stand together at this pivotal moment in history to defend this president, to protect our freedoms, and to stop this election from being stolen from the American people,” said Founder Cindy Chafian on the group’s website.

RELATED: Protesters Flood Streets After Police Kill Man Who Shot at Them

“To the United States Congress: YOU WORK FOR US. On January 6, 2021, do not certify this ‘election’ which is so clearly rife with fraud. We will not allow you to turn a blind eye to the corruption any longer. Honor your oath and remember who you serve: WE THE PEOPLE,” the website says.

“To those who wish to destroy America. We see you! You have slapped a lion on it’s backside and that lion will not turn away in defeat. Americans are awake and YOU WILL NOT WIN!”

“It’s time for every person who loves America, who cherishes their freedom, the Constitution, keeping elected officials accountable, and preserving everyone’s rights to stand unified,” the site continued. “The march for Trump continues and WE MUST stand TOGETHER and FIGHT FOR AMERICA!!!”

Enrique Tarrio, leader of the right-wing Proud Boys, said members of his group will be present at the rallies on Jan. 6 — and “incognito” without their usual black and yellow attire, according to The Washington Times.

“We will spread across downtown DC in smaller teams,” the group leader said on social media. “And who knows … we might dress in all BLACK for the occasion. The night calls for a BLACK tie event.”

Do you believe there was fraud in the 2020 presidential election?

Wednesday’s protest coincides with the joint session of Congress called to certify the results of the Electoral College, which last month declared Democratic candidate Joe Biden the winner of the Nov. 3 presidential election.

However, despite numerous claims of voting irregularities, including sworn affidavits alleging fraud submitted by reported eyewitnesses, no court has yet ruled that widespread fraud materially affected the results of the presidential election.

Numerous House and Senate Republicans have pledged to outline their objections to certifying the vote on Capitol Hill on Wednesday.

Woman Losing Hands and Legs to Amputation After Suspected Bad COVID Vaccine Reaction, Jab Was Required by Her Employer: Report