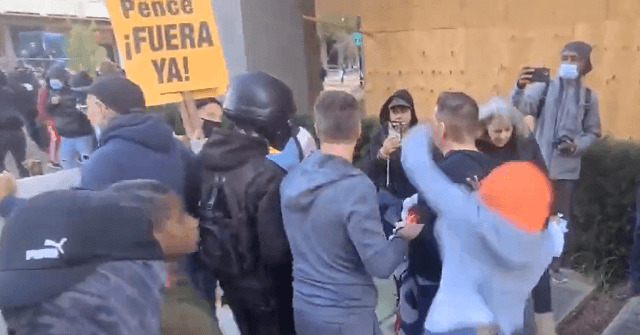 “The D.C. police failed me today,” says a conservative attorney forced to walk through a gauntlet of BLM/Antifa protesters after police blocked the shortest pathway to his hotel. The incident happened after the Million MAGA March on Saturday as anti-Trump activists attacked multiple conservatives leaving the event.

A video tweeted by Daily Caller field reporter Jorge Ventura shows a man who later identified himself as Christopher Horne and two other conservatives approaching a line of D.C. Metro police officers blocking people from entering BLM Plaza near the White House. The trio pleaded with officers to be allowed to proceed to their hotel via the shortest distance having already been hassled by BLM protesters, Horne said in a tweet.

DC Police blocked off BLM again so Trump supporters couldn’t get through and were made to go through BLM group which then attacked them. #MillionMAGAMarch pic.twitter.com/tS7YTEe51X

The officers reject their appeal to steer clear of the chanting BLM protesters — many of whom were standing close by, Horne said.

Horne responded to Ventura’s tweeted video, saying, “I’m the guy in your video that is seen pleading with the police to go to my hotel, the Hay-Adams, which was literally less than a 1/2 block from that corner.”

Thank you @VenturaReport! I’m the guy in your video that is seen pleading with the police to go to my hotel, the Hay-Adams, which was literally less than a 1/2 block from that corner. The police refused to allow me to pass, forcing me to go through

He said the cops refused to let them go to the hotel located about a half-block from where they were standing. Instead, they directed the trio into what he called the “Black Lives Matter mob.”

“I have always been a huge supporter of the police, but the DC police failed me today,” Horne continued. “It almost felt like it was a setup, to be honest.”

The video bears this out. Within two steps of turning away from the cops, Horne is confronted by a man on a bicycle wearing black bloc. People start bumping him immediately as he walks into the crowd of protesters.

As they crossed the street, a woman, “Orange Cap,” attempts to steal a rolled-up Trump flag Horne is carrying. She failed in her attempt but came back for more. Horne’s friend pulls him out of the crowd who began assaulting him.

“Orange Cap” circles around and sucker-punches Horne from behind.

“What’s the matter with you people,” Horne yelled at the crowd.

Two men in black bloc attempt to block them as they walk away. One of them punches Horne in the ear.

Someone attempts to restrain the mob from pursuing the trio. However, “Orange Cap” again sneaks up behind Horne and his companions.

In Ventura’s continuing video, “Orange Cap” continues to pursue Horne until she is distracted by another skirmish that broke out behind her.

The mob attacked a man wearing black bloc including a helmet. As he ran away, “Orange Cap” is seen assaulting the man two times.

The video leads into another attack on a different man that left him lying knocked out on the street and kicked in the head, Breitbart News’ Ildefonso Ortiz reported.

“Orange Cap” again interjects herself and assaults the man in the brown coat. When she sees the man get sucker-punched and knocked to the ground, she grabs her friend and says, “Go, go!” and takes off running.

As other conservatives pull him to safety, a police officer finally is seen in the video. He radios for assistance.

Nearly four minutes passed from Horne’s initial brush with BLM in front of police officers to an officer calling for assistance. During that time, Horne and his friends were assaulted multiple times and another man was seriously injured from attacks by the BLM/Antifa crowd.

“Why are you guys letting this happen?” someone asks the police officer.

Horne said in his tweets, “My disappointment in the police and in America in general outweighs the punches and liquid being thrown on my several times.”

He said when they arrived at their hotel, the complained to police about what happened. He said officers reported they saw nothing and told him he needs proof.

He believes Ventura’s video now offers him that proof.

Ventura later tweeted a video showing police interviewing “Orange Cap” and her friends. He said he turned copies of his video over to police to aid in prosecution.

The footage of the brutal assault was captured by myself and @FromKalen. We gave the footage to authorities and they arrested the 5 individuals who were responsible for the attack. #MillionMAGAMarch pic.twitter.com/SF8FiboCcg

Breitbart News learned from journalist Kalen D’Almeida that the officers arrested five people in connection to the assault on the man knocked to the street. Those include:

It is not known if they are charged with any assaults from the first video above.

The attacks on Trump supporters leaving the Million MAGA March show people being assaulted with little intervention until after the assaults take place. It was not until conservatives began fighting back later in the evening that police stepped in to separate the groups.

Bob Price serves as associate editor and senior news contributor for the Breitbart Texas-Border team. He is an original member of the Breitbart Texas team. Price is a regular panelist on Fox 26 Houston’s What’s Your Point? Sunday-morning talk show. Follow him on Twitter @BobPriceBBTX, Parler @BobPrice, and Facebook.