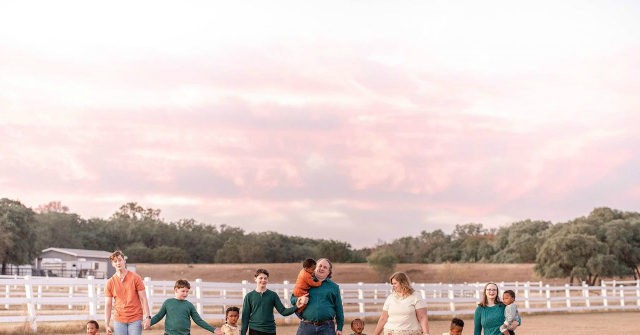 After taking classes with the Texas Department of Family and Protective Services, Jamie Hejduk and his wife, Heather, began fostering twin boys who were just two months old, according to KSAT.

“Then, we found out there were four other siblings,” Jamie recalled, his wife adding, “We fell in love with the kids.”

During a virtual ceremony with Judge Charles Montemayor on Thursday, the couple officially adopted all six children.

“You may not have given birth to them, but you’ve given them their life and we can’t thank you enough. God bless you,” he said.

Prior to the adoption, Heather thought their caseworker was kidding when she asked if they wanted to take all of the children.

“We decided, yes, we did. We couldn’t split up all their siblings,” the young mom commented, adding that their only daughter had always wanted a sister.

“Little did she know her little sister wasn’t born till she was 16, and she didn’t meet her until last year,” she continued.

“We think we’ve raised four good kids, and okay, we can do that again,” Jamie told KENS. “The only way we could see them staying together is if we were the ones to do it.”

To accommodate their growing family, the Hejduk’s upgraded from a seven passenger van to one big enough for fifteen and also made some adjustments to their spacious house.

“We were able to rearrange our home to fit that many,” Jamie explained.

“I mean they’ve been ours, but now nobody can change that,” she concluded.