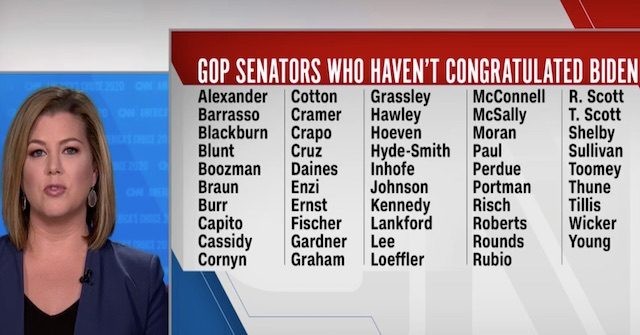 Tuesday on CNN’s “Right Now,” host Brianna Keilar featured a list of Republican Senators who have not made public comments “acknowledged Joe Biden is president-elect.”

Keilar said, “You can count on one hand how many Republicans acknowledged Joe Biden is president-elect. Senators Lisa Murkowski of Alaska, Mitt Romney of Utah, Susan Collins of Maine, Ben Sasse of Nebraska. The rest here are silent, emboldening the president as he refuses to concede. But why? Oliver Darcy here to shed like on this subject. Tell us really what is in the calculus of GOP senators according to your reporting.”

Senior media reporter Oliver Darcy said, “If you watch right-wing media, you would think the election was stolen by corrupt deep state Democrats. If you watch Fox News, that is the message, If you listen to talk radio, that is the message. If you read these far-right websites, the president is promoting that is the message. This matters because Republican politicians they know that the real power players in their Republican Party are Sean Hannity, Tucker Carlson, Laura Ingraham, Rush Limbaugh. Those are the people who control the Republican Party. them coming out telling audiences this election was probably stolen, Trump should maybe be president-elect again, that desensitizes Republican politicians who need to come out and tell the president what you’re pushing is not true and disinformation.”