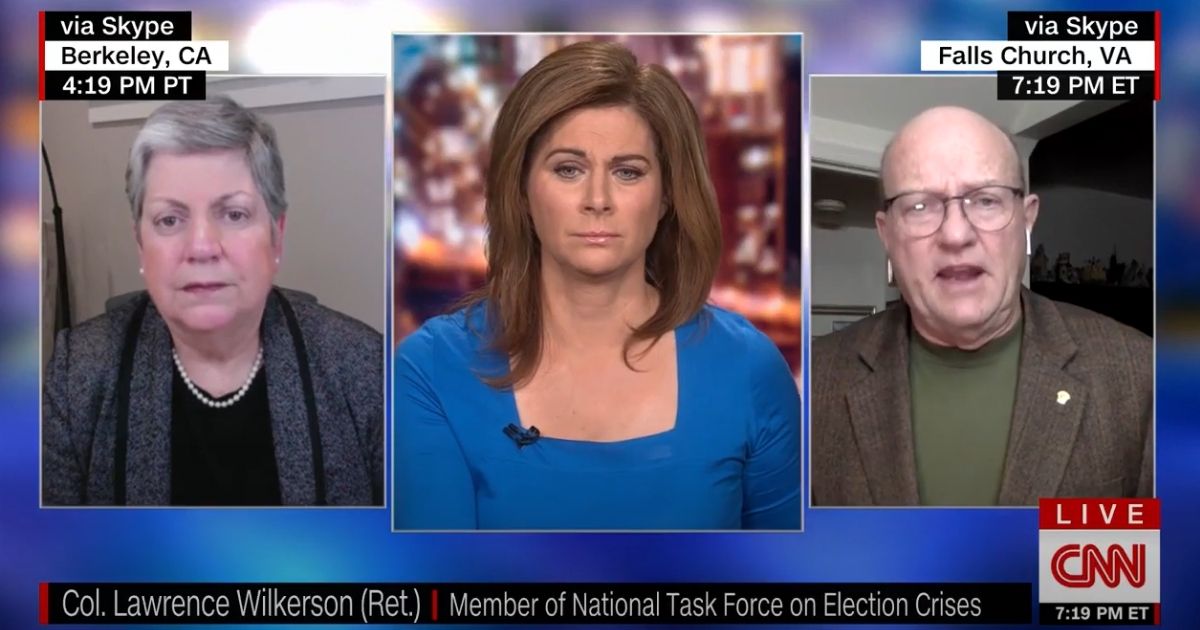 In case you haven’t been watching CNN since they called the presidential race for Democrat Joe Biden on Saturday, you’re probably unfamiliar with the general setup of how the coverage works.

The basic arrangement, when the network isn’t opining on the perfidy of President Donald Trump’s decision to challenge the results in court, is to bring two or three mildly famous faces on to discuss how Biden will be the soothing balm America needs at this moment.

The vetting of these faces, however, might be a little off.

Take retired Col. Lawrence Wilkerson. He’s a beloved figure on the left, having made the journey from Colin Powell’s chief of staff during his time as secretary of defense to the kind of guy who makes visits to far-left news outlets such as Democracy Now, where he can make statements like “America exists today to make war.”

This and other comments — particularly of the anti-Semitic variety — were overlooked by CNN when the network brought on Wilkerson, now a fellow with the Quincy Institute, to talk up Joe Biden.

Wilkerson was enlisted specifically to talk about the Trump administration’s refusal to concede; he’s a member of the National Task Force on Election Crises, which was set up to respond to a situation where one side protested the results of this year’s election. (Well, really only one side.)

What’s amazing is that with all of this gravitas, no one has seen fit to question Wilkerson about remarks he’s made over the years about the power of “the Jewish lobby in America” and “AIPAC in particular.” Yet, as The Washington Free Beacon reported Wednesday, he’s been making these remarks for years.

“In a 2007 documentary Wilkerson said the ‘Jewish lobby’ had more influence on the Bush administration’s decision to invade Iraq than the administration’s belief that Saddam Hussein possessed weapons of mass destruction,” The Free Beacon reported Wednesday.

On Tuesday, he was criticizing Secretary of State Mike Pompeo for his remarks that “there will be a smooth transition to a second Trump administration.”

“We’ve had secretaries of state from Thomas Jefferson to William Jennings Bryan — John Kerry, who wanted to run for president,” Wilkerson said.

“But they didn’t do it from the podium of the secretary of state,” he said.

This was what Pompeo was up to, according to Wilkerson, by “trying to capture that little kernel of Trump’s base.”

As for Biden, he’s “one of the most experienced people, certainly in security and foreign policy, to come to the White House in a long time,” Wilkerson said.

RELATED: Joe Biden Has Touted His Endorsements from Leading Anti-Semites

Again, no one was pressing him on the fact he’s pushed anti-Semitic tropes before.

He’s not the only anti-Semite who’s in Biden’s corner, either.

In July, the Democratic candidate accepted an endorsement that should have gotten more attention than it did — from Emgage, an anti-Israel Muslim PAC bankrolled by George Soros.

Biden gave an 11-minute speech to the group’s virtual conference from what I assume was the atrium above his basement, the room he used to use when he realized too many people had looked at the same shelves of books for too long.

The problem with Emgage isn’t just that the group is anti-Israel. It’s also that Emgage co-hosted the Islamic Society of North America’s conferences, which are chock full of anti-Semites.

Take Linda Sarsour. She’s the Women’s March co-founder whose remarks have managed to tear the movement apart, in many ways. She’s been a prominent speaker at the ISNA events.

Does the left have an anti-Semitism problem?

Sarsour called for an “intifada” in America in 2014 and said Israelis shouldn’t be humanized in 2018 (at an ISNA conference speech, even). According to the Washington Examiner, she also has said Israel (which she wants to abolish, naturally) “is built on the idea that Jews are supreme to everyone else.”

And that was just Emgage. Biden’s campaign also touted an endorsement from rapper Jeezy (legal name Jay Jenkins), who has a close enough relationship with one of America’s most notorious anti-Semites, Nation of Islam leader Louis Farrakhan, that he’s called Farrakhan his “mentor.”

Lawrence Wilkerson isn’t necessarily an official arm of the Biden campaign, it’s worth noting. Unlike Jeezy, Biden didn’t feature an ad from Wilkerson on his YouTube channel. He didn’t give remarks to the Quincy Institute the way he did with the Emgage virtual conference.

It yet again underscores, however, the kinds of anti-Semites the left and the establishment media are willing to platform, so long as they support the right candidates.