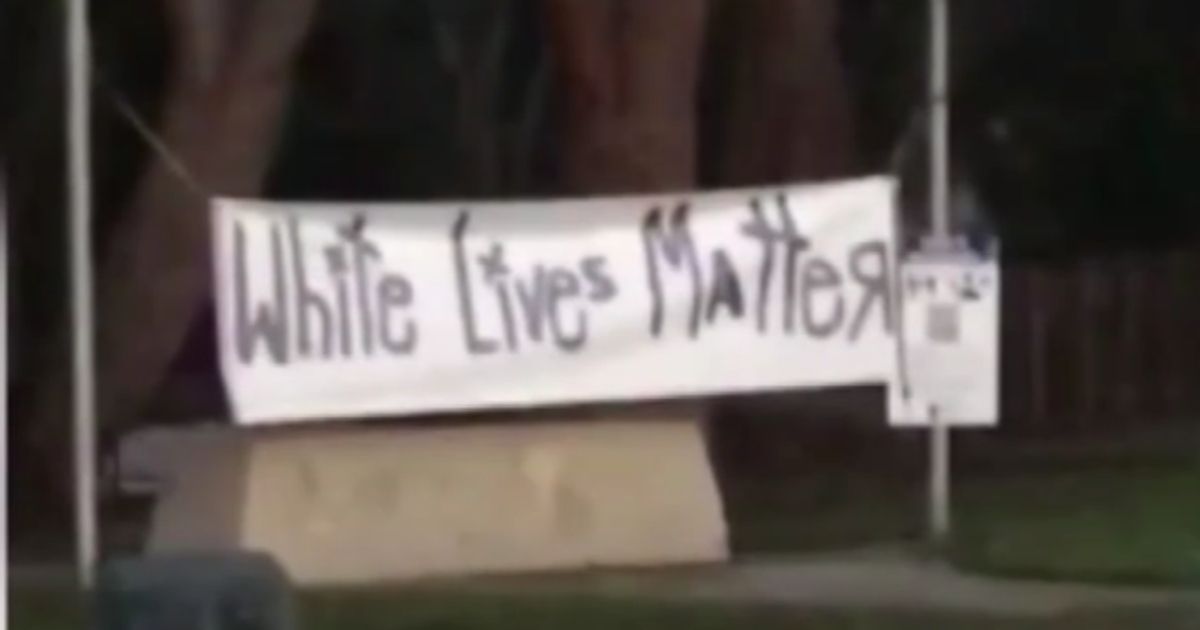 In nearby San Francisco, the enormous bright yellow words “Black Lives Matter” were emblazoned on a three-block stretch on another busy public way. A third public street, this time in Martinez, California, was painted over with a similarly gigantic bright “Black Lives Matter” statement.

But when a modest “White Lives Matter” banner showed up last week about an hour’s drive from Martinez at the corner of a public way in Union City, it was deemed illegal because it was on public property and ordered removed, KGO-TV reported.

Local officials barely fell short of spitting on the sign, calling it a “despicable act of vandalism” and “racist.”

“This morning a ‘White Lives Matter’ banner was removed from the corner of Smith Street and Dyer Street. It was illegally placed on public property,” the city said in a statement.

“The City is disgusted by this despicable act of vandalism that has occurred on the heels of the insurrection at the U.S. Capitol last week and on the weekend of the Martin Luther King, Jr. holiday that celebrates the life and achievements of this important civil rights leader.”

“A police report has been filed. The City Council and the Human Relations Commission, along with the UCPD and City staff, remain on heightened alert to make sure racist incidences like this do not happen again in our community.”

It’s unclear who put the banner up or what their motivations were, but what we do know for sure is that no one was charged with or accused of a “hate crime” for taking it down.

Do you think this “White Lives Matter” banner was “racist”?

However, when a couple showed up and started painting over the Black Lives Matter mural in Martinez, they were charged with a “hate crime.”

And this summer, the conservative group Judicial Watch was reportedly sent packing when it wanted to paint its motto, “Because No One is Above the Law,” on a street in Washington, D.C., which at the time was home to a massive “Black Lives Matter” mural that activists later added the phrase “Defund the Police” to.

In fact, there are few major cities without a public street that features a Black Lives Matter mural.

Now to be fair, in the case of the “White Lives Matter” sign, there was no permit or permission given to post this banner on public property. (Though that doesn’t mean the party or parties responsible were motivated by any sort of racism, and in fact, there’s nothing inherently racist about the phrase “White Lives Matter” in the first place.)

That being said, all the city had to do was take it down and throw it in the dumpster. Instead, we get a virtue-signaling statement from the city calling it “racist”, “despicable” and “vandalism.”

Imagine if it was a “Black Lives Matter” sign that went up with no permit. No doubt the city’s reaction would be much, much different.

But no, it was a “White Lives Matter” sign. And it revealed plenty about the double standards in American society today.