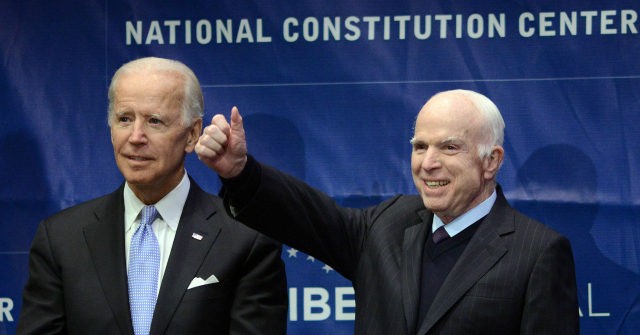 Cindy McCain believes her late husband, Sen. John McCain (R-AZ), would have wanted the country to “move on” post-election and throw our support behind Joe Biden (D).

“He would be telling these people, ‘It is time that we move on. It’s time that we heal, it’s time that we support our President-elect and also encourage the GSA [General Services Administration] to release the funds so that he can get on with his transition team,” McCain said during an appearance Friday on CNN.

“And not only that, I think that his standards, his values, the things he works for, working together, working across the aisle, making sure he does things not for himself but for the good of the country,” she continued, “those are the values that he’s always had, and I look forward to watching him and participating in this down the line. We’re just so excited here in Arizona,” she added:

Cindy McCain: “It’s time that we support our President-elect and also encourage the GSA to release the funds so that he can get on with his transition team.” pic.twitter.com/zPqzHuZhgl

McCain endorsed Biden in September and lent her voice to Democrats, speaking of her late husband’s relationship with Biden in a segment for the Democratic National Convention in August.

McCain, who serves as an advisory board member on Biden’s presidential transition team, has added that there is “a role for Republicans” in a Biden administration.

“I do sit on the transition team, and I’m very proud and honored to do so. And my job is to help recruit Republicans into places within the administration,” she said during a recent appearance on The View.

“This is an administration that is going to be all-inclusive, and there is a role for Republicans in the administration,” she added:

.@cindymccain, a member of Joe Biden’s presidential transition team, says “this is an administration that’s going to be all-inclusive.”

“There is a role for Republicans in the administration.” https://t.co/f8u2wbJuik pic.twitter.com/pnw1uvldHk

President Trump remains confident that he will be able to pull off a victory, detailing his post-election fight in an interview with the Washington Examiner‘s Byron York, citing audits and lawsuits to ensure election integrity.

“Never bet against me,” Trump said.