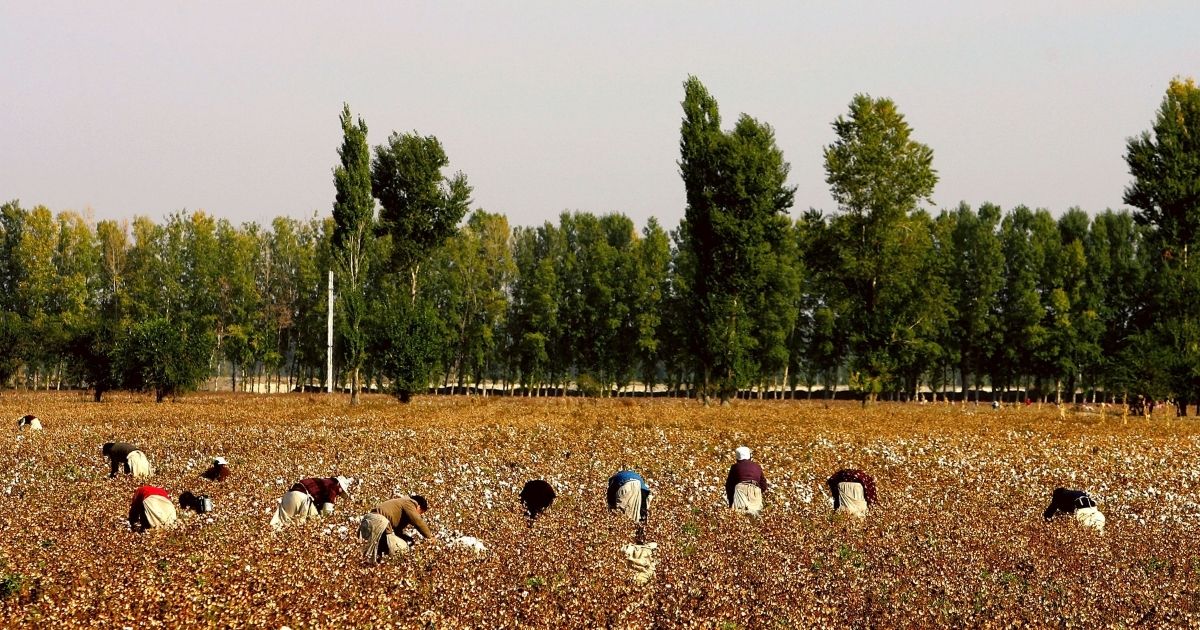 Guang Niu / Getty ImagesMigrant workers pick cotton in the fields October 15, 2005 in Shihezi city of Xinjiang province, China. Every year, thousands of farmers from inland provinces, including Central China’s Henan, East China’s Anhui, Jiangsu and Shandong provinces, travel to Xinjiang for the cotton harvest season when a large number of temporary cotton pickers are needed. Cotton workers can often earn RMB 2,500 ($320) for the whole harvest season, which covers a period of two or three months. (Photo by Guang Niu/Getty Images)

The People’s Republic of China has been accused of taking a page from the Democratic Party’s history books by embracing the practice of slavery to cheaply bring in cotton harvests.

And like the inhumane institution held up by Democrats in the antebellum American south, the Chinese are reportedly perpetrating this evil against one of their own country’s minority groups.

According to information and intelligence gathered by the Center for Global Policy in a Dec. 14 report, the People’s Republic is forcing “hundreds of thousands” of Uighurs to pick cotton in Xinjiang, China.

“The evidence shows that in 2018, three [Uighur] regions alone mobilized at least 570,000 persons into cotton-picking operations through the government’s coercive labor training and transfer scheme,” the CGP said in its analysis.

The thinktank speculates that the number of those forced into the fields is actually hundreds of thousands higher than 570,000.

This puts a massive question mark on the Chinese textile industry, where Xinjiang’s slavery-sourced cotton makes up 85 percent of the country’s total production of the fiber, according to the CGP. Most of this cotton must be picked by hand.

Considering the massive amount of raw material coming out of the region, it’s likely that any industry that uses cotton in the country is now tainted by the specter of indentured servitude and cultural genocide.

Slavery is banned in most countries, but exists in different forms despite the laws that ban it.

The abhorrent practice was legal in many American states all the way up to the second half of the 19th century.

Championed by the overwhelmingly Democratic Party-led agricultural regions, it took a civil war for slavery to finally be abolished from the republic.

While the practice was made illegal, leading Democrats vindictively worked to make things as tough as possible for newly-freed black Americans.

The animosity of the white southern Democrats toward their black chattel appears to mirror that of the ethnic Han-dominated Chinese Communist Party and the Uighur minority.

Uighurs, whose native land is a rural province in remote northwestern China, have a different culture, religion, and language than that of the country at large.

While China seems appears intent on moving full steam ahead with the oppression of an entire people, members of the modern Democratic Party are more than happy to turn a blind eye to the reported injustice happening across the Pacific Ocean.

Presumptive President-elect Joe Biden is also remarkably close to elites of the communist regime, and Chinese President Xi Jinping even refers to the former vice president as an “old friend.”

Rand Paul Slams ‘Notorious Liar’ Comey — ‘Should Be in Prison’

Rand Paul Slams ‘Notorious Liar’ Comey — ‘Should Be in Prison’