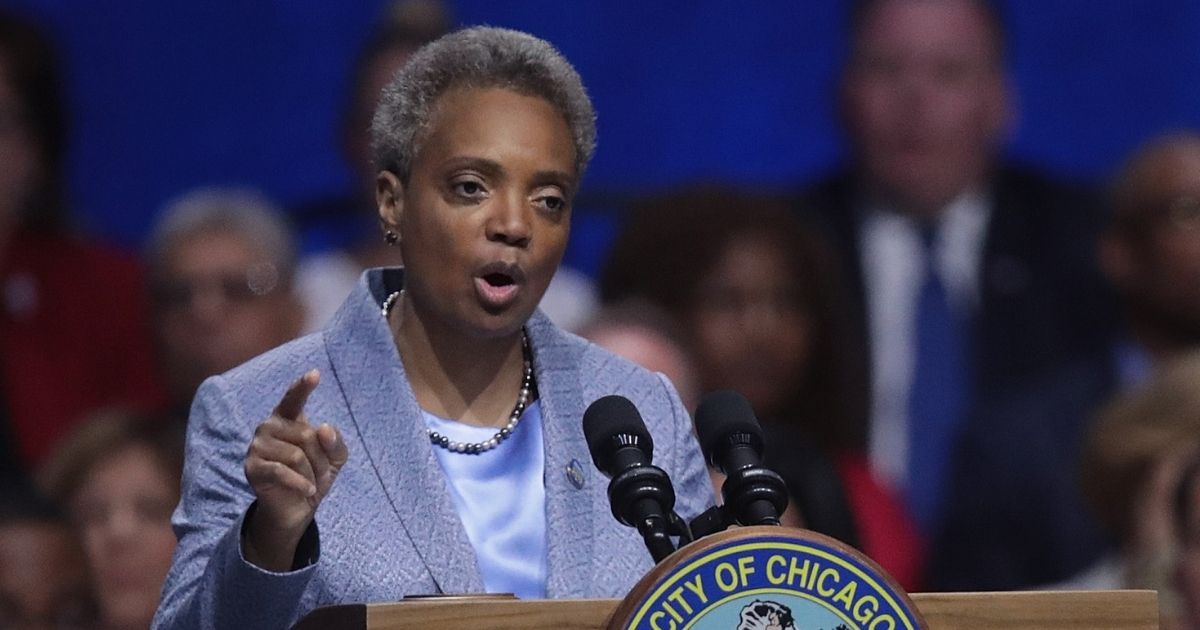 Last Saturday, Chicago Mayor Lori Lightfoot was out in the streets, celebrating in close quarters with everyone who was thrilled Joe Biden had been declared the victor of the presidential election by the media.

On Thursday, she issued a stay-at-home “advisory” over COVID-19 and told Chicagoans that they needed to cancel their Thanksgiving plans.

According to WMAQ-TV, Lightfoot made the announcement as part of a new plan called “Protect Chicago” that was launched late last week.

“Chicago has reached a critical point in the second surge of COVID-19, demanding that we undertake this multi-faceted and comprehensive effort to stop the virus in its tracks,” Lightfoot said.

The advisory is, even by the standards of these things, relatively strict. Chicago is asking residents to “only leave home to go to work or school, or for essential needs such as seeking medical care, going to the grocery store or pharmacy, picking up take-out food, or receiving deliveries.”

“The city also specifically noted that holidays should be celebrated using phone or video chat instead of in-person visits,” WMAQ reported.

“You must cancel the normal Thanksgiving plans,” Lightfoot said Thursday, according to the station. “Particularly if they include guests that do not live in your immediate household.”

Meetings and social events will be limited to 10 participants, no matter whether they take place indoors or outdoors.

Just in case you forgot, here was Lightfoot last Saturday, telling crowds that because the media had called the race for Joe Biden, “we get to take our democracy back.”

This is a great day for our city and our country. We are taking our democracy back. #BidenHarris2020 pic.twitter.com/OAZQPd1r4y

And you get to take your turkey back, too, as well as the stuffing mix, that weird cranberry sauce that comes in the can…

Lightfoot defended her decision to appear mask-less on the streets of Chicago, shouting into a megaphone, just days before she told residents of her city that they couldn’t go anywhere for Thanksgiving.

“Well, look, I think that we’ve been saying all along everybody has to take care, everybody has to take precaution,” Lightfoot said. “I will tell you, in that big crowd a week ago, we had everybody was wearing masks. Look at, you can see the shot here – mask compliance in our city is actually up very, very high. But yes, there are times when we actually do need to have a relief and come together, and I felt like that was one of those times.”

Should Thanksgiving celebrations be canceled?

As opposed to Thanksgiving, a yearly celebration where we come together to give thanks to God for the blessings bestowed on our lives and the country.

“That crowd was gathered whether I was there or not,” she continued.

“But this has been a super hard year on everyone. Everyone feels traumatized. They feel threatened, their safety, and they don’t know what tomorrow’s gonna bring, and with this new surge in cases, we have just got to step up and do the right thing, and I think people understand that.”

.@chicagosmayor Lightfoot defends celebrating Biden’s Election Day in the streets despite her own rules against mass gatherings: “That crowd was gathered whether I was there or not.” pic.twitter.com/MR81LnHfa7

“You know, we know a lot more … than what we knew back in the spring. We’ve got a lot more data,” she continued.

“We understand better on how this virus spreads. Back in the spring, when we issued these blanket stay-at-home orders, it was because we really didn’t understand where the risk was, so we were trying to mitigate it everywhere.

“So, we want to support our economy as best we can, but we’ve got to do the things that we know are necessary to save lives.”

This is wildly disingenuous on a few levels.

First, if Chicago’s officialdom knew “the biggest risk that we’re seeing in our city is in these private spaces and gatherings,” then why is a stay-at-home order part of Chicago’s new advisory? Why are gatherings of more than 10 not allowed even outdoors?

Just a reminder: Lightfoot enjoyed her Biden celebration as she likely knew these rules or something like them were coming down the pike.

Furthermore, during the celebrations over Biden being declared the victor, Lightfoot never warned anyone to not attend afterparties, even though it was clear from the nature of the event those would occur. She didn’t tell anyone not to use public transportation to get to and from celebrations, given that it packed people into an enclosed space.

Of course, it could just be Lightfoot has a capacity for cognitive dissonance that’s superhuman, even among politicians. During the first statewide stay-at-home order, put in place by Illinois Democrat Gov. J.B. Pritzker in March, barbers and salons were deemed nonessential businesses and thusly shuttered. No one told Lightfoot, since pictures of her getting her hair done emerged.

“I’m the public face of this city,” she said at the time. “I’m on national media and I’m out in the public eye. I take my personal hygiene very seriously.

“I felt like I needed to have a haircut. I’m not able to do that myself, and so, I got a haircut. You want to talk more about that?”

Actually, now that we can’t have Thanksgiving but you can shout into a megaphone without a mask as people congregate around you, yes, I would.

I trust the mayor is still available.