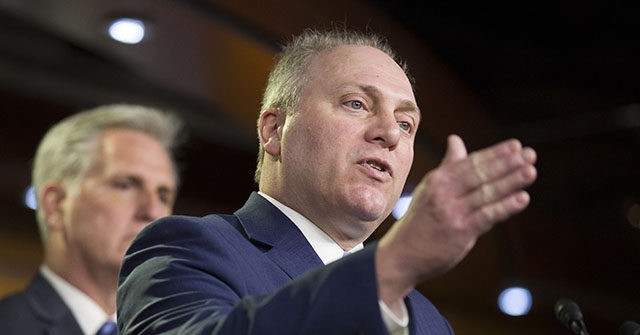 Rep. Steve Scalise (R-LA) told Breitbart News on Thursday that left-wing “cancel culture” advocates ignore the media personalities and politicians who “inspired” the leftist who attempted to murder him and other Republicans at a congressional baseball game in June 2017.

Scalise said, “We’ve seen the cancel culture on full display these last few years. They started when President Trump ran for president. They wanted to cancel him before he even got sworn in. Then they wanted to impeach him. And then after he’s gone, they want to just act like he wasn’t even president.”

Scalise added, “They want to shut down Republicans. They want to close down Fox News and Newsmax and OAN. They would sure love to get [Breitbart News Daily] off the air. We’re not going to let that happen, but they’re serious about it.”

Scalise highlighted the ideological and political links between his would-be murderer and left-wing news media outlets.

“It’s important that we call them out on it and that we put the mirror in front of them and remind them what happens on some of these other networks  — their darling far-left radical networks and the garbage that they’re spewing,” Scalise remarked. “I wanted to just remind my colleagues that when the shooter from the baseball field back in 2017 walked onto that field, he had a list of Republicans in his pocket that he wanted to execute.”

Scalise continued, “If you really think that canceling people because you want to blame them for other people’s actions is where you’re going, then let’s start where it all started, and that is on the far left.”

Scalise described broad left-wing and Democrat support for political censorship and opposition to the First Amendment as reflective of their lack of confidence in their own abilities to persuade people in an open arena of ideas.

“A lot of it is because they’ve lost the ability to debate ideas,” Scalise said of left-wing “cancel culture.” He remarked, “When you look at the cancel culture on college campuses, which is where people learn how to disagree in a polite way, where you learn how to just sharpen your ideas against people with different ideas because, for goodness’ sake, if you can’t defend what you believe in against someone who believes in something differently, maybe you need a evaluate whether or not you’re believing in the right thing.”

Scalise concluded, “There’s an insecurity on the left when they try to cancel us. It’s because they know they can’t debate us successfully.”