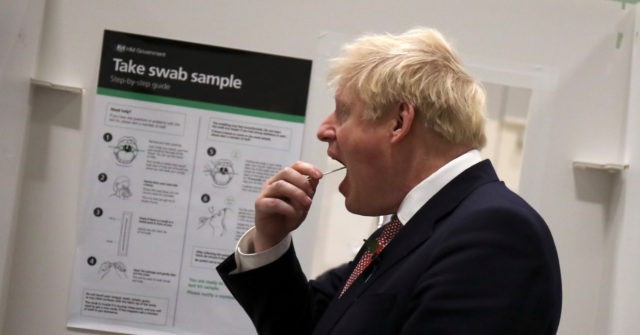 Prime Minister Boris Johnson has declared he is going to stick with his fourteen days’ self-isolation despite having tested negative for Coronavirus.

He claims to be ‘fit as a butcher’s dog.’ But that rules are rules.

Hi folks, I’ve been instructed by our NHS Test & Trace scheme to self-isolate for two weeks, after being in contact with someone with Covid-19.

I’m in good health and have no symptoms, and will continue to lead on our response to the virus & our plans to #BuildBackBetter pic.twitter.com/yNgIme8lOz

If these really are the rules then they are bloody stupid rules. What even is the point of having one of these tests if, regardless of the result, you’re going to have to put yourself in quarantine anyway?

The test Johnson has taken is called a ‘lateral flow’ test, which will be familiar to many as the method by which you ascertain whether or not you are pregnant. This is the system that is currently being trialled for mass-testing in Liverpool. It’s easy to administer — requiring just a nose or throat swab — and displays the result within 15 to 30 minutes. But its sensitivity reportedly varies and may miss cases or give false positives.

While the possibility that the test is inaccurate would support Johnson’s case for self-isolation regardless of his negative result, it also makes a nonsense of the government’s decision to buy 20 million such tests for use in Liverpool. Either it’s a valid test or it isn’t: which one is it?

Even Johnson himself seems to have acknowledged in a What’s App to his MPs that this has more to do with gesture politics than with medical science.

PM message to MPs on Whatsapp tonight: “the rules are the rules” pic.twitter.com/9ZSrDOFRTP

“It doesn’t matter that I feel fine – better than ever – or that my body is bursting with antibodies from the last time I had it.

The rules are the rules and they are there to stop the spread of the disease.”

As with so many of Johnson’s statements, it rather feels like he is making it up as he goes along.

Some have suggested that this self-imposed self-isolation is really just a handy excuse to duck out of the limelight for a while.

This is nuts. What is he hiding from? https://t.co/8QBSaBlMtI

What is he hiding from?