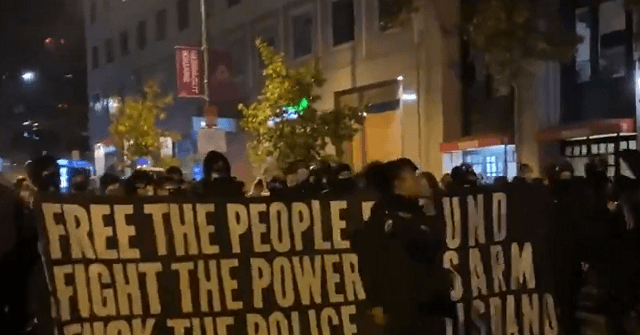 During a protest march to Black Lives Matter Plaza in Washington, D.C., BLM members shout “Burn it down.”  Members wore all black and carried umbrellas for protection from police crowd dispersal munitions.

“Burn it down,” BLM members shouted as they marched through the streets of DC. The group headed to Black Lives Matter Plaza near the White House late Saturday night, journalist Henry Rodgers tweeted.

Separate group has broken off screaming “burn it down”… Dressed in all black. Marching downtown DC. A lot of umbrellas as usual with no rain in forecast: pic.twitter.com/xBi6oMq0N0

The standard refrain of “What do we want? Justice” was followed with calls to “Burn it down!”

Another journalist, Madison Muller, tweeted a video of BLM protesters chanting, “All cops are bastards” as they approached Black Lives Matter Plaza.

A group of protesters continuing to fight for racial justice is now approaching Black Lives Matter Plaza, where Biden supporters have been celebrating all day. #dcprotests pic.twitter.com/nUZ72yCvUO

Another video from Jesse Franzblau reveals additional “Burn it down” chants from BLM protesters being followed by Metro DC police officers on bicycles.

Bob Price serves as associate editor and senior news contributor for the Breitbart Texas-Border team. He is an original member of the Breitbart Texas team. Price is a regular panelist on Fox 26 Houston’s What’s Your Point? Sunday-morning talk show. Follow him on Twitter @BobPriceBBTX, Parler @BobPrice, and Facebook.