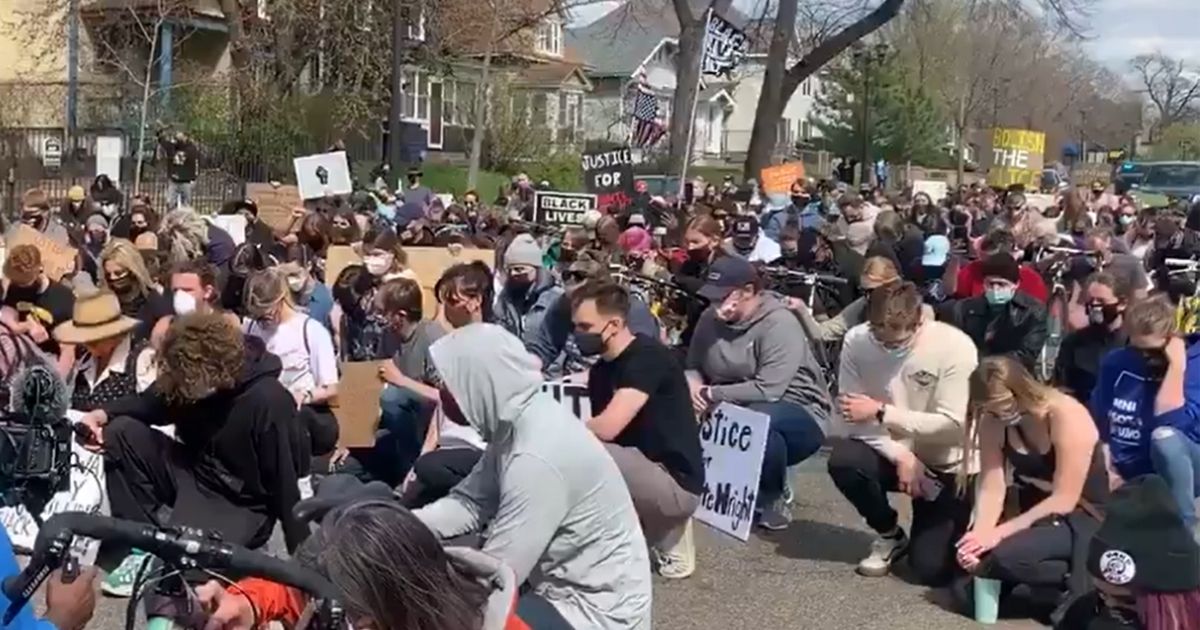 Black Lives Matter has led the charge to make seemingly every issue in America a referendum on race. One example of this came during a protest outside Minnesota Gov. Tim Walz’s mansion in St. Paul on Sunday.

The New York Post reported that dozens of protesters were kneeling outside the mansion amid reports of a shooting involving an officer in Burnsville, Minnesota.

Mitti Hicks, a reporter for KMSP-TV in Minneapolis, tweeted a video of the kneeling protesters, some of whom were displaying Black Lives Matter signs, flags and other memorabilia.

“Protestors kneel after hearing there was an officer-involved shooting in Burnsville moments ago,” she reported. “This information HAS NOT been confirmed but this group says they’re heading there.”

Protestors kneel after hearing there was an officer-involved shooting in Burnsville moments ago. This information HAS NOT been confirmed but this group says they’re heading there. pic.twitter.com/MHdQQmytnY

About an hour later, Hicks reported that the protesters were leaving to return to the Brooklyn Center Police Department, where protests were taking place over the police shooting death of Daunte Wright on April 11.

“Just an update on this, protestors said later they’re heading back to Brooklyn Center because they need more information about what happened in Burnsville first,” Hicks said in a follow-up tweet.

Could it be that rather than needing “more information,” the protesters obtained that information and realized that it did not fit their narrative?

Is BLM sowing division in America?

The Burnsville Police Department announced Sunday that the person who was shot was a white man who had opened fire on its officers.

“At this time, the initial police report indicates suspect fired numerous shots at officers who returned fire. The suspect, believed to be a white male in his 20s, was taken to Hennepin County Medical Center where he was later pronounced dead,” the department said in a news release.

Traffic camera video obtained by KARE-TV shows a man jumping out of a moving car and seemingly pointing a gun at an oncoming vehicle before police eventually shot him.

This incident provided multiple setbacks for the protesters and the BLM narrative as a whole.

RELATED: We Need More ‘We Are the World,' Less Critical Race Theory and BLM

First, a group of people kneeling over the shooting of a gun-wielding criminal is not a great look. Even if they did not know the details of the story, they were apparently kneeling because they assumed the victim was wrongfully killed, which does not appear to be the case.

Second, this story hurts the narrative that unarmed black men are disproportionately killed by police officers. While they try to frame every officer-involved shooting in the worst possible light, BLM and its mainstream media allies dismiss stories of cops doing heroic deeds such as stopping criminals.

Ironically, they now have shined a light on a situation that appears to represent a police officer doing the right thing for the community.

While the murder trial of former Minneapolis officer Derek Chauvin is in its final stages, anti-police sentiments are strong in much of the media as well as in the entertainment industry.

“I’m not saying there are no good policemen, don’t get me wrong. I’m asking where the good apples are,” he said in a video posted to YouTube on Wednesday. “And what I mean by that is, where are the cops who are stopping the cop from putting their knee on George Floyd’s neck?”

He went on to say that “good apples” are the exception in American police forces because the overall system is poisonous, and that it is actually succeeding in its goal of “keep[ing] poor people in their place.”

“We’re not dealing with bad apples,” Noah said. “We’re dealing with a rotten tree that happens to grow good apples, but for the most part the tree that was planted is bearing the fruit that it was intended to.”

In other words, we are supposed to believe that isolated incidents of police officers doing bad things are enough evidence to determine that the entire system of policing in America is evil.

By that same logic, videos of police officers doing the right thing and protecting the community would prove that the system of policing is not evil.

There are a lot more videos of heroic police officers than there are of terrible ones, but Trevor Noah does not want people to know that.

The embarrassment for the BLM protesters at Sunday’s demonstration is twofold.

On the surface, they appeared to be advocating in favor of a gun-wielding criminal, which is pretty embarrassing on its own. Yet a deeper investigation into the matter shows that their actions shined a light on an event that flies directly in the face of their “all cops are bad” narrative.

With Sunday’s actions, these demonstrators not only made themselves look foolish but also unknowingly damaged their anti-police narrative.